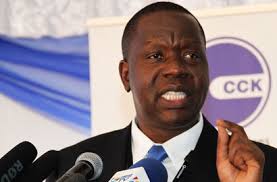 My stomach churned when I heard ICT Cabinet Secretary Fred Matiangi  claim that the misuse of social media has reached ” Chronic levels ” and Social media is responsible for the tribalism cancer in this country.

Demonstrating poor understanding of social media platforms, Matiangi’s aim is to intimidate social media users and make them keep quiet in the wake of evils that have engulfed this country. Social media is the best and timely platform to reveal these evils.

You cannot stop ideas whose time has come. You will die a frustrated man

Saying that social media users are using the platforms to assassinate the characters of president Uhuru and his deputy William Ruto is a stupid blanket accusation. I have always said and insisted that if I spread hatespeech on social media, come after me…Dont spend time accusing other social media users but that is after people like Moses Kuria are also arrested

As ICT Cabinet secretary, Matiangi should be encouraging the young people how to benefit from social media. But when a man of his stature threatens us, the silence is deafening

Matiangi  has issues with comparing Uhuru’s regime with Apartheid …. This is after some cartoonist drew a cartoon comparing the langata road primary school situation with that of Apartheid …But who did he blame ? He blamed Bloggers …Hey ! It is easy to blame a blogger. I would like to ask Matiangi what he wanted us to compare the situation of teargassing children with/to ! To him, comparison is more blasphemous than the teargassing of young kids …WTF !

Matiangi must leave social media users alone. We have our freedoms and if anybody goes overboard, Arrest them according to the law . The recent arrests have been awkward, always against the truth. The application of the law must be uniform- Nobody should be immune.

Lastly, the government should work. They are too idle to notice that Kenyans on social media are holding them accountable. Social media is the new revolution. The last time I checked my facts, Tribalism, Impunity, Corruption and poor leadership are the problems this country is facing not social media.