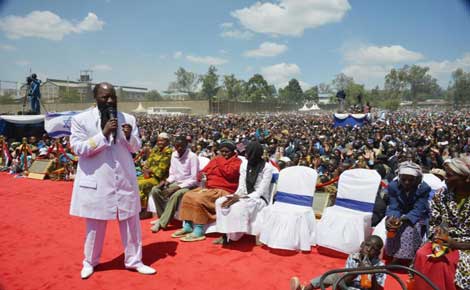 If you want to be rich in this world, start selling hope. The world has many desperate people who want hope. Shockingly, nobody wants to work hard, they want miraculous hope. Selling hope is a booming business. Dont ask me who does that :  Politicians, our own preachers and even in relationships.

Who is this Man prophet Owuor ? Despite the fact that 6 people died in Prophet Owuor’s crusade, this man has not been arrested and questioned. According to  the police, the fellas died while waiting for Owuor’s miracles. Nakuru OCPD Bernard Kioko said they died from natural causes at the crusade grounds.Hilarious !

How many Kenyans must succumb for Kenyans to understand that this man is running a Cult ? TRULY, Kenyans will never learn.

This ” Prophet ” has a loyal following that even cleans the road for him to pass. He is always accompanied by a convoy of vehicles and bouncers who are more dangerous than ODM’s men in black . The bouncers have been severally accused of harassing people but nothing has ever been done.

Kenyans love hope. You wont be surprised why many people are becoming pastors. Somebody would rather pay a pastor money to pray for him instead of seeing a doctor . When we have people with such a thin mindset in a society, who do we blame ?

I was heartbroken when I saw a woman who has refused to go to hospital because she believes Dr Owuor’s prayers will heal her-  one night. Her left eye is badly damaged and the mother is asking for help to convince her to see a doctor. That is not the only case: There is a guy who stopped taking his ARVS because he believed in miraculous healing which never came. His health deteriorated and he later succumbed

Our People have been poisoned by Prophet Owuor. They are now chained, they need help. This man has taken more than he Giveth! It is time for us to forcibly take it back !!

Kenyans cant see something amiss. If you are sick, see a doctor, anybody who wants to pray for you should do that in the hospital. This is not science, it is common sense. Owuor should also be commanded not to let very sick people into his crusades. He should advice them properly.

He must also be questioned concerning the mysterious deaths of six fellas a few weeks ago. Religion should not bring misery to a society. Is he Running a Cult ?

You wouldnt want to be in the same church with this man !