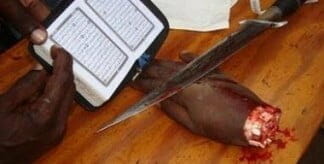 On many occasions, we have heard the politically correct – Corrupted media elites telling us that Not all Muslims are bad, it is just a few mad ones who decide to kill innocents. Now, the media elites will go ahead to tell us that we should tolerate each other – Do we tolerate something good or bad ?

Some of these guys who commit these crimes have genuine flags and fight for the real Prophet. They are  taught from the same Mosques by the same Mosques. Islam is Islam.

I read Mdoe’s article in the Star Newspaper claiming  that we should be able to tolerate each other. Personally, I would not  tolerate poorly cooked meat  unless it is well  cooked and flavored. You get my point. Mdoe goes ahead to tell us that we have not read the Quran and that is why we have been messing up with Islam. He cites freedom of the press and sums it up by saying that freedom has limitations .  Mdoe’s article also touches on Multiculturalism which is an impossibility according to me.

If we look at the West, Policies championing Multiculturalism have terribly failed. The main reason is that the policies do not fit in well with different ethnic , cultural and religious belief of a given society.

In October 2010, after understanding the political problem, Chancellor Merkel of Germany stood up and genuinely reported that Multiculturalism had terribly failed in her country.

It is not a hummane formula to respect other cultures. a COUNTRY CANNOT PROMOTE A CULTURE THAT WANTS TO TAKE MORE THAN IT gives. ***Snip *

David Cameron also made it clear in his Feb 5th 2011 speech that ” Under the doctrine of state multiculturalism we have encouraged different cultures to live separate lives, apart from each other and apart from the mainstream ”

In France, President Sarkozy  cited Multiculturalism  as the major tool promoting and advancing extremism. He categorically said that Muslims in France must practice French Islam not Islam in France.

Personally, I cannot tolerate anything that denies people freedom of speech and does not respect human rights. The belief that all cultural and religious groups should be respected is a mere joke and an impossibility.  If I have to tolerate anything then it must must respect my rights etc.

Personally, I wouldnt  tolerate anybody who feels that drawing a cartoon of his/her prophet is more blasphemous than the butchering and heinous murder of innocents . How do I even start tolerating that ?

So Mdoe is completely wrong. But those are his opinions and I will defend his right to give them.