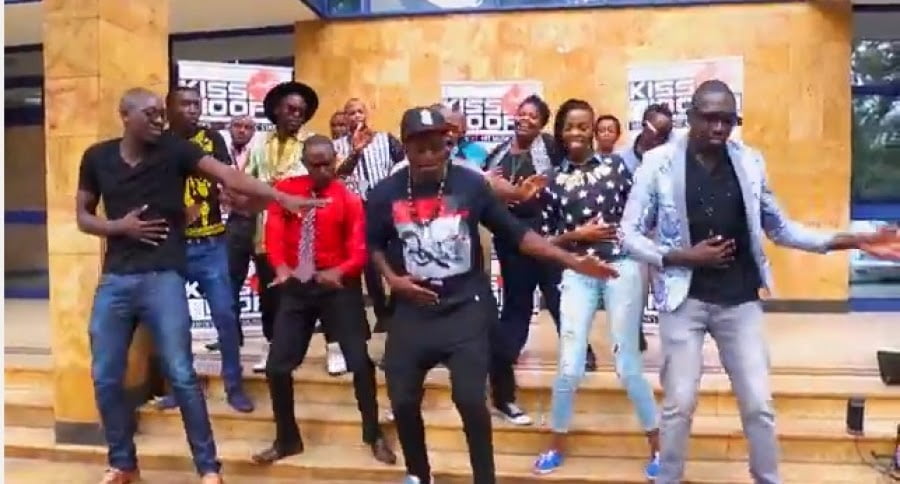 Caption: Sauti Sol dancing their trademark “Lipala” routine which has now been abused by the boy-band.

Before you chicks of low self-esteem come for me gun-blazing for criticising your favourite boy band, I’d just like to make it clear that I do this out of love. We have to be the change we want to see.

For instance why are Kenyans so disillusioned about someone like FKF President Nick Mwendwa? Because this is a young gentleman, who we imagined would bring fresh ideas because of youth and energy, but he’s turned out to be a fraudster only interested to loot football coffers together with his greedy advisors and Executive Committee.

So we have a bastard by the name of Nick Mwendwa, who is under the age of 40, but who reasons, speaks and acts like a retard, far worse than his “father” and predecessor Sam Nyamweya.

At some point, we need to justify our youth and not just call for a mindless generational-dispensation, and voting in myopic and an even more disastrous set of younger individuals, all in the desperate quest for “change”.

We could also say the same about President Uhuru Kenyatta. Nobody hates him. But if you compare his manifesto and work delivered so far, the Jubilee idiots who forever keep praising his name will genuinely admit that we got short-changed. Had he not delivered such grandiose pledges and said “vote for me because I just want to use my position to evade ICC-arrest”, perhaps Kenyans would not feel so short-changed.

Sauti Sol, the Kenyan sensations took the country by storm when producer “Wawesh” discovered them from the back-streets and produced their first album which featured the hit-song “Lazizi.” And from then on, ladies got hooked. And in Kenya once you have the ladies, you’ve struck gold.

Because ladies in Kenya always have disposable income to engage in consumerism because they can get “sponsors” or multiple men to send them MPESA or cover various costs. Ladies also don’t drink with their own money, and will go out to be treated by guys who hope that it will translate into sexual-intercourse.

So basically women in the country are the consumers and drivers of key brands. And Sauti Sol knew from the onset that they need corporates and event organisers to earn from the various shows or parties that also need women to attend. So it’s one ecosystem that’s rigged to manipulate success.

But if you look at Sauti Sol’s recent music videos, you will notice that they have abused one dance-routine which they christened “Lipala” dance, that looks like a dumbed-down marsh-up of lingala and some Kenya National Music Festivals singing-game that our mediocre 8-4-4 teachers treat President Uhuru Kenyatta at Statehouse to.

And those mediocre 8-4-4 schools who entertain the President at Statehouse after a rigorous selection process countrywide, are termed as the creme of Kenyan arts. What a travesty!

Anyway, that dance routine by Sauti Sol reflects the mediocrity which has been entrenched in the Kenyan society. We celebrate mediocrity. Nobody strives for excellence and exceptionalism.

Mercy Masika is perhaps the biggest gospel artist now. But watch her perform and you will just be disgusted, if that’s our so-called “best”. No dance-routine, no color, no choreography, no props, no back-drop, zero creatity…..what the hell!

Beyonce spends most of her time practising routines and injuring her toes and that’s why she’s the best. She also directs her music videos, leaving nothing to chance. Kenyan musicians on the other hand don’t even excercise. Look at Jaguar, DK Kwenye Beat, Rufftone etc, they have all added weight because of eating Nyama and Ugali.

And the same bastards will wonder why they aren’t going global like their Nigerian counterparts. Well it’s because the world doesn’t run on mediocre standards like Kenya, where anyone can bribe a Daystar journalist to write fake stories of delusional success. The world only uptakes merit.

Do these characters even re-invest back in their talents? Ofcourse not. They are like our stupid Government officials who loot public coffers in-order to build flats. By now, Sauti Sol should have used their money to invest in a good choreographer, and better video producers from elsewhere in the world, so as to fine-tune their product.

Rufftone shouldn’t be gaining weight then come to perform infront of us Kenyan who know and appreciate quality because we have access to channels like Trace and MTV. Get out of here man. There was once Rufftone performed his mediocre “Mungu Baba” song at Kasarani during the inauguration of President Uhuru, and I honestly thought his trouser will tear in the middle.

Wahu is also like Jubilee; full of lies. She has been talking about releasing her album since 2002. Like what country is this that we’re living in? That a woman who has no album for the last 14 years can bribe a few journalists so as to promote her non-existent talent? In America for instance, even the basic underground musician has an album.

We have to stop elevating mediocrity and make it our business to scout for exceptionalism. And our first port of call is the media. Kenyans have to stop this over-reliance on mainstream media journalists, who can be bribed to write anything that suits their pockets. These journalists working in Kenyan media houses are pure scum who should be ignored.

For instance, I once saw this fat newscaster Evelyn Wambui doing a feature on Alcoblow, whereby she was paid by Lee Kinyanjui to fear-monger on a misguided project that has had disastrous effects on the dream of making Nairobi a 24-hour economy. The same Wambui is now always on the scene, drinking and partying like the rest of us, probably evading the same people she promoted. What an idiot.

Since Alcoblow was introduced, many bars like Tamasha, Galileo have closed, nightlife is slowly becoming non-existent, 24-hour supermarkets shut down, leaving one to wonder why an entire city must suffer simply because Lee Kinyanjui was mounting road-blocks so that he can extort money from drivers and take his malaya’s to Dubai for holiday. Such mindless individuals advise our President. And you wonder why the economy is collapsing.

Now these are so-called “young” people, implementing Alcoblow, much to the detriment of the economy. Just like the young Nick Mwendwa using his position to reward players of his Kariobangi Sharks Club with National Team slots. Or just like Sauti Sol abusing a dance-routine.

Are these really the youth who will drive Kenya’s agenda? Or is there an underlying problem where the people who are exceptional in Kenya are being blocked by this rotten system that only elevates shameless self-promoters?

Because the media for instance, is riddled with people who are not specialists. Many were failed musicians who got jobs as news anchors or radio hosts. Jimmy Gathu for instance, sung a few songs back in the 90’s, simply to elevate himself into the media industry. Sheila Mwanyigah also performed as Nikki, whilst secretly eyeing a media job. Sanaipei Tande is also another basic bitch who sung abit so as to get noticed and employed in media. Third-rate comedians also used Churchill to elevate themselves into media.

We really have no specialists out there and if there exist any, the system is designed to lock them out. Reason why the calibre of adverts in Kenya is very low.

For instance, ever wondered why Bharat Thakrar, the CEO of ScanGroup, produces the most mediocre of adverts? Shareholders will be surprised to discover that the company they own, employs nothing but patronage and not merit, when selecting third parties whom to source concepts from.

For instance, Bharat Thakrar only works with Phat Rain when doing concepts like the Safaricom adverts. Phat Rain is owned by Andrew White. Bharat is also said to own shares there. White is the mzungu scum-bag, who has been involved in shoddy Mungiki deals, and was in a murder suit that also connected to politician Betty Tett. There was also a time he was busted with illegal guns.

He gets all the jobs at Scanad, because he also owns 3.22% of it. Because Bharat Thakrar wants to make as much money from service providers in this publicly-listed firm and contrary to Capital Markets Authority rules, he only works with Andrew White. And due to the fact that the two have a working relationship, there is never any pressure to out-do themselves, thus they are content with shoving mediocre marketing campaigns on Kenyans.

We will from now shift focus to Bharat Thakrar and Andrew White. We cannot have two immigrants manipulating the advertising industry by dispatching mediocre content on us.