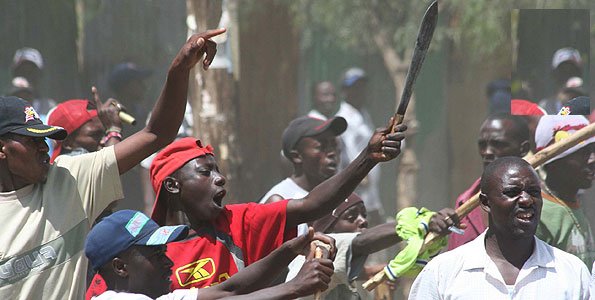 Kenya has always been referred to as a peaceful country amidst turmoil in the horn of Africa.

But that notion was challenged in 2007/2008 after Kenyans descended on each other with machetes, clubs, arrows and spears, in an unprecedented violence that shocked many.

What most don’t know, is that this spate of abrupt violence has made many people ‘stockpile’ on weapons.

No one wants to be caught unawares anymore.

A survey conducted between 2014 and 2016 by Small Arms Survey, an Institute based in Geneva, Switzerland revealed that there were over ‘750,000 guns in private hands in Kenya’. The biggest in East Africa.

The survey also stated that as other neighboring countries i.e. Tanzania, Uganda, Ethiopia and Rwanda were reducing their cache of illegal weapons, Kenya’s increased.

Though we’ve not had much violence by people to people in the two presidential elections after 2007, that does not mean that the next might not be even more violent than the 2007 one.

Other nationalities such as Nigerian, Rwandese, Burundians, Congolese, Sudanese have come to Kenya and some engage in petty crimes.

Though some are very disturbing, like the Umoja case where some Nigerians are accused of gang-raping a Kenyan woman.

The Chinese influence wants to permeate all sectors of life. And I bet their mafia will follow suit. Maybe they are already in Kenya.

There was a video of a Kenyan man disciplining a Chinese man who had referred to him as, ‘monkey’.

Remember the case of the Chinese boy who was deported for calling president Kenyatta a monkey?

Most likely, from what we see in South Africa, the locals think that they are disadvantaged in terms of economic activities and jobs.

Most think their poverty is caused by the foreigners or the privileged ‘different-looking’ people ‘who have come to take away their jobs’.

We’ve had cases of mistreatment by Indians at Industrial Area but nothing violent has ever been done to these same guys though the ‘feeling is the same’ as described above.

Maybe we are used to suffering, however, xenophobic attacks are not always the solution.

The solution is to put government of the day to task.

It is the sole prerogative of the government to provide jobs, to create conducive environment for the economy to thrive.

The Chinese did not find themselves in Kenya permeating all levels of government;  they were invited.

However, if the Kenyan government doesn’t solve the numerous complains raised by Kenyans about the mistreatment of their brothers in institutions such as the Standard Gauge Railways (SGR), then these feelings often gang up to create xenophobia.

READ: [EXPOSÉ] SGR: A Heartbreaking Story Of Discrimination, Harassment, Exploitation And Theft That Can Move One To Tears

Some Kenyan have commented supporting xenophobic attacks in South Africa.  Some say that that needs to be replicated here in Kenya against foreigners who are dealing in drugs, sexual exploitation and mistreatment of locals.

CNYAKUNDI.COM does not support these sentiments. However, we are just posing a question; Are Kenyans capable of going the South African way?

I think with the treatment of foreigners better than locals; the runaway unemployment that the government doesn’t deal with and the many reported cases of mistreatment and police buying by foreigners will one day culminate in something that the fake National Intelligence Service is not prepared for.

We’ve had calls of revolution since 2017 elections. We are continuing to see the political landscape change unfavorably for some. Watch Uasin Gishu county in 2022.

Speaking from a point of information!

The USA doesn’t always give a shit about any other countries falling into war. In fact they benefit from war.

With the mix of issues that Kenyan youths and the population in general is facing. A revolution will start from any angle.

Woe unto the politician caught in the street. Kablam!

In this article:Post Election Violence