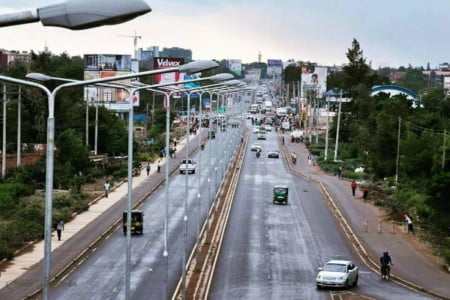 A section of Kisumu city

The works consists of building a new 24-kilometre line to create seamless travel between the Mombasa port and Uganda.

Kenya Railways Corporation (KRC) announced last month that the works will be undertaken using locally available resources and manpower just the same way it has been done on the Nairobi – Nanyuki line.

CRBC started work last week and has already built two kilometres of the new meter gauge line that will link SGR to the old track.

The rehabilitation of the Naivasha – Kisumu line is planned to end in 8 to 12 months.

Initially, Kenya had plans of tapping the Chinese for the upgrade. The 216km line will connect to the recently refurbished Sh3 billion Kisumu port, which will enable ferrying of cargo and passengers to Uganda, Rwanda, Burundi and Democratic Republic of Congo on ships via Lake Victoria.

Kenya dropped its plan to extend the standard gauge railway (SGR) to Kisumu and later on to the Ugandan border after failing to secure a multi-billion shilling loan from China, which funded the first and second phases of the project.

The old line, which had a thriving passenger service in the 1990s, will form the major supply route to deliver cargo to the neighbouring countries through the Kisumu port. The Passenger service which was under the Rift Valley Consortium (RVR) was said to have been discontinued because of ‘low volume and the like for economy class by most passengers’.

Mr Mainga said Kenya will fund the upgrade of the Kisumu line from internal resources, cutting reliance on Chinese loans for railway projects.

The old line from Naivasha to Malaba has been operational but is in bad condition, limiting the cargo volumes and train speeds.

The track from Nakuru, which goes through Njoro, Londiani, Muhoroni and terminates at Butere, has not been in use.

A cargo rail business is critical in making the Kisumu port a viable public investment.

The port is ready for use, but its official launch has been delayed. It is expected to raise the fortunes of the western Kenya city as a regional economic hub.