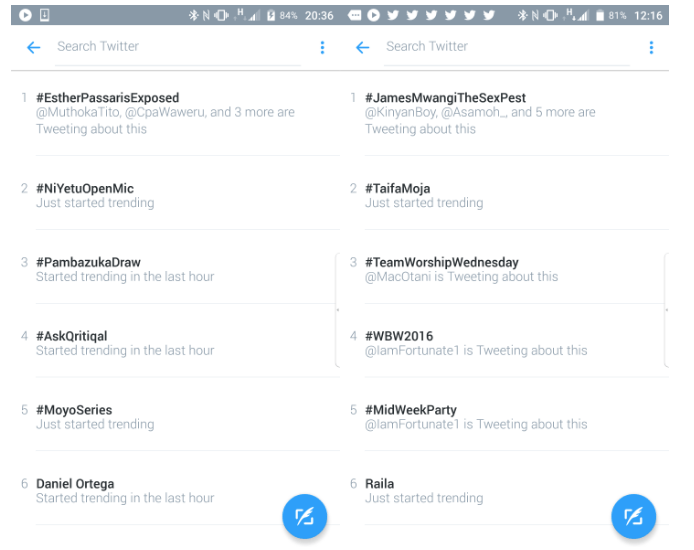 CAPTION: Twitter Trends show how Woke-Twitter had managed to trend James Mwangi as a sex-pest, until Broke Twitter came in to sanitise him as an angel sent to Kenya by heavenly forces.

Contrary to public perception and pontification, social-media is what runs this country, seeing the way James Mwangi reacted to a mosquito bite with a hammer by bribing bloggers to react to the hashtag that revealed his true self as someone who uses his position for personal/sexual gain.

While Esther Passaris may have her own weaknesses, the burden of proof isnt on her, since she has never been a custodian of money handed to her out of goodwill. Esther isn’t a CEO of a publicly-listed company that has a duty and obligation to play by both Central Bank and Capital Markets rules. She runs a small outfit trying to survive like every other Kenyan.

Those insulting Esther Passaris are simply agents of James Mwangi who should instead sue Ms. Passaris instead of engaging in a dirty campaign tarnishing her image and persona, if indeed they believe that she is lying.

Woke Twitter is the segment of social-media that rationalizes issues outside the framework of bribery and coercion. Broke Twitter is the segment of social-media that’s paid to run with any hashtag void of conscience and logic. In this segment you will find Abraham Mutai @ItsMutai busy insulting me, yet his blog hasn’t even been ranked by Alexa due to the inferior content in it.

Broke Twitter bloggers need to appreciate me because I have created the opportunity for them to benefit from the Kshs. 10 Million that Equity Bank CEO James Mwangi has allocated to wage an online war against Esther Passaris. The sad part is that 90% of that money is going to a middle-mans pocket, with only 10% being disbursed to Broke Twitter-bloggers.

James Mwangi has now met his match, considering that he has operated as the blue-eyed boy of the banking sector over the last ten years, acting as a revolutionary yet he is a thief whose only purpose in life is to acquire all prime properties lodged at Equity Bank as collateral for loans.

The son of Equity Bank Chairman Peter Munga died under mysterious circumstances, after jumping off the balcony of Black Diamond Club in Westland. Peter Munga is so stubborn, that he cannot connect the death of his only son to the past historical injustices he has committed unto people, especially the client whom he stole Pioneer School from.

Former President Daniel Arap Moi’s grandchild was in the news recently, for stealing a cellphone, and yet the old bastard cannot connect the tribulations in his family, to the injustices he meted on Kenyans. It’s life; what goes around comes around. God said that he will curse up to the fourth generation, those who committed crimes and went against his teachings. Peter Munga, the Chairman of Equity Bank is a candidate. He will be alive to see Karma come back to bite his ass.

There is a reason why Bill Gates, Warren Buffet, etc commit a substantial amount of their earnings to charity or research for the next Cancer/HIV vaccine. Because their money is self-made. But James Mwangi only uses the Mastecard Foundation money floss as if it was his, yet he is silently trying to hijack property filed by unsuspecting clients as collateral.

Dear James Mwangi, Broke Twitter will not absolve you from the crimes you have committed on your clients. Bribing bloggers to tarnish the name of Esther Passaris won’t negate the fact that you used sexual-coercian to solicit and even attempt to take over her company, which would have been an African success story.

Your legacy has just gone down to waste due to greed and your affinity of bribing mainstream media journalists to look good. We hereby call on you to resign as CEO of Equity Bank, as your continued stay will result into a major catastrophe for this country.

For instance we have received two emails informing us of cases against Equity Bank by former bank officials, cases which have all been ruled against the bank. This one involved an expatriate, an African American by the name Maurice Ewing What’s shocking is the salary he was earning. US$ 35,000 per month and this was in 2012. That’s about KES 4M which means James Mwangi must have been earning much more because I dough he can hire an employee and pay him more than he takes home himself.

So clearly James Mwangi is not only disregarding laws, but using his position to intimidate and sexually abuse helpless women like the former head of the International Monetary Fund (IMF) Dominic Strauss-Khan. Indeed James Mwangi should by now be under the criminal proble of Ndegwa Muhoro, so as to give the DCI boss some work, so that he can stop being idle and arresting bloggers.

State resources should never be exploitted by civil-servants wrongly, like how Muhoro dispatches vehicles to arrest peaceful bloggers, as terrorists and gangsters roam in peace.

There seems to be a flagrant disrespect for labour laws by the CEO James Mwangi because he believes he cannot be taken anywhere due to his proximity with President Uhuru Kenyatta. But in essence James Mwangi should be behind bars together with Peter Munga the chairman who used customer deposits to build the Enashipai Hotel in Naivasha, and another director Stanley Muchoki used depositors money to construct Summerdale Hotel in Nairobi West shopping center.

Today, we don’t care who James Mwangi is. He is just another scum of the earth.