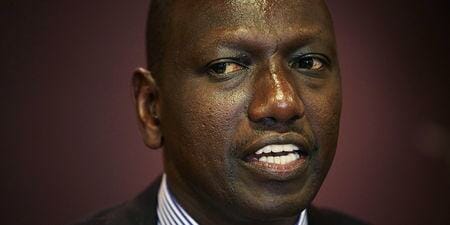 The recently announced merger of TNA and URP into one political party called Jubilee Alliance Party is likely to do harm than good to William Ruto’s URP. Uhuru Kenyatta’s TNA is also likely to suffer in the area.
Already dissenting views are emerging from the bitter URP members in the South Rift region of Bomet and Kericho who claim that the merger decision was made in haste before consultive and extensive consultations.
The merger came at a time when URP support in the two counties in the South Rift is waning and is at the lowest ebb. Politicians in the populous Kipsigis subtribe have a bone to pick with Ruto following allegations that he is involved clandestinely in the controversial issue concerning the proposed establishment of the Bomet University.
The Bomet University controversy has rekindled the rivalry between him and Bomet governor Isaac Ruto. Governor Ruto and his supporters wanted the proposed Bomet University to be established on a 65-acre piece of land at Sigor trading centre 30 kilometres outside Bomet town. On the other side, four MPs representing various constituencies in the county and MCAs supporting the deputy president want the institution of higher learning to be constructed in Bomet town.
The MPs and MCAs who are perceived to be acting on the behest of deputy president recently staged a demonstration in Bomet town. The protestors alleged that Governor Ruto was fighting for for Sigor site because it is near his rural home.
The relationship between the DP and members of the Kipsigis community has yet to return to normal ever since an abortive attempt was made by the Kericho assembly MCA to impeach Kericho governor Paul Chepkwony and his Bomet counterpart. The contentious issue was only resolved after the intervention of the Senate.
Kericho senator Charles Keter is a close political associate of the DP and his pointman in the region.
URP has become unpopular with residents, especially URP in Kericho and Bomet as the result of the party key players alleged role in organising politicians from the two counties who frequent the Sugoi home of the DP in Eldoret. There are allegations that during such visits, issues related to South Rift politics are always discussed at length, something which has created rift and disunity among the elected leaders in the two counties and the DP. Those who visit the Sugoi home are allegedly well oiled with money to fight their opponents. Upon their return from such trips, they engage in dirty campaigns. It is said the DP has perfected the art of divide and rule in Kipsigis poliltics to have leaders not speak with one voice. His fear is, if they unite, he will not have control over them.
The stand taken by Kanu national chairman Senator Gideon Moi of Baringo in opposing the impeachment of Governor Chepkwony has made his name popular among the Kipsigis.
One politician who the Kipsigis people are banking their hope is the Kuresoi South MP Zakayo Cheruiyot who the community believes together with the two governors can liberate them politically. Cheruiyot is currently quiet, but the former Internal Security PS in the Moi regime is known to be a schemer who calculates his moves well. He was instrumental in having the DP form URP that has propelled him to power in Jubilee.
Apart from the two governors and Cheruiyot, former cabinet minister Franklin Bett has the political say over this most populous community of the Kalenjin community.