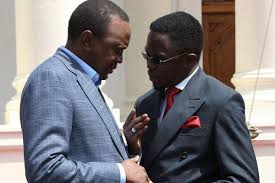 Will Uhuru Kenyatta new strategy to win the substantial Luhya vote block? Sources within Jubilee have revealed that uhuru and his deputy have worked on a three-pronged strategy to win the community.
The first is the mind game where the plot is to allow key region all key industries to be on a death bed.
As a result, those who that on manufacturing factories for livehood will start making squabbling and blaming their elected leaders for not doing anything to help them.
Feeling pressure and eager to be re-elected, the leaders will do nothing but befriend the Jubilee government to come to their rescue.
This strategy seems to have worked well in Mumias, Kakamega county. Local political leaders regardless of party affiliation feeling sugar farmers’ cries first met president at State House.
During the State House talks, it was agreed Mumias sugar factory has to be bailed out. Uhuru to make a political gain in the region surprised many at the meeting when he announced he would personally hand over the cheque to the management.
It has emerged, Ruto was to officiate the function but local MPs befriending Jubilee were of the opinion Uhuru’s presence would have an impact than that of Ruto. Apart from Mumias, Uhuru is said to be playing mind games on Nzoia Sugar, Panpaper and Kibabii University.
Whereas the government has pumped money in Nzoia and Panpaper and even at Mumias, many say it is mere politics at play to lure the Luhya community.
For Kibabii University, the issue of being awarded a charter to be a full-fledged university has been postponed about three times. A source told said the idea is to wait a right time to do so. In fact it is said, Uhuru is aware; awarding the charter before Nzoia and Pan-paper are on full operation will be counterproductive.
The naming of Eugene Wamalwa as cabinet secretary after two years in cold is part of the mindgames. In Eugene mind was, at one time he will be in cabinet but never knew when until recently. He was kept waiting with his supporters giving up. His appointment has been received well going by events in Bungoma and Trans Nzoia counties.
The second strategy is splitting Jubilee hunting for Luhya vote into three camps. Uhuru is supposed to handle seasoned region politicians among them Musalia Mudavadi, Cyrus Jirongo, Kenneth Marende, Soita Shitanda, Noah Wekesa, Alfred Sambu, Joash Wamang’oli just to name not forgetting Wamalwa.
According to sources, the so called seasoned politicians have no time for Ruto. As a result, keen observers will have notice, whenever Uhuru is in the region, Mudavadi, Wamalwa, Wekesa are always notified in advance.
On the side, Ruto is to deal with first time MPs in parliament. It is on this grounds legislators Ayub Savula, Ben Washiali, Ababu Namwamba, Ben Washiali, Atalo, Injedi and Wagwe who are Ruto foot soldiers in the region always freguent the DP office every Friday for handouts before travelling to their respective constituencies.
The move is, to have Uhuru win votes allied to seasoned politicians while Ruto does the same via new MPs and old friends like Ababu Namwamba.
The third strategy is to deny Raila Odinga the Luhya vote bloc by registering new political parties associated with prominent faces. Fear is, if the region is solid behind Cord and with Kamba looming rebellion, then Raila or Cord presidential candidate will have upper hand.
Whereas Jubilee strongholds have been denied registration of new parties, Luhyas are being considered at alarming rate. Jirongo and Marende have a new outfit United Democratic Party, Mudavadi is now in Alliance National Congress, with Wamalwa’s New Ford Kenya battling out to control the region for years now. Vihiga governor Moses Akaranga has a party plus many others with roots in the region.
We have information Jubilee also has its own people on ground led by Stanley Livondo. Livondo we have established was dispatched by the president handlers to mobilise support in Kakamega town and Mumias. Within Jubilee is that anything is bound to happen hence need to have pointmen on ground who despite all support the government. They have to be united and Livondo who is set to run for Kakamega senatorship is the man.
Infact MPs from the region avoided Kakamega town on way to Mumias fearing those lining along the streets were to heckle Uhuru. They were surprised to learn, Livondo had mobilised pro-Jubilee supporter to welcome the president. It is said Livondo is selling the idea, the region backs Uhuru then come 2017 be considered for five cabinet slots and same principal secretaries.
Analysts say, Uhuru strategy will only work if the factories are revived but in case he fails, then let him think twice. For now, the community feels marginalised just like their neighbours Luos.
They say, as long as Uhuru has Ruto as his deputy, making inroads, in the region is a tall order. The number one enemy of Luhyas is not Uhuru or collapsing industries but Ruto.
Ruto does not get on well with influential Luhya politicians, and professionals who he is accused fighting day and night. He is accused of blocking Mudavadi presidency in 2013 even after Uhuru had accepter to back him. If Ruto did not back-off, Mudavadi a Luhya will be president now. Jubilee goofed in the region when it sidelined the community in first government appointments favouring minority tribes. It seems, they have discovered in their mid term and want to address the sensitive issue. Whether it will work or not, only time will tell.