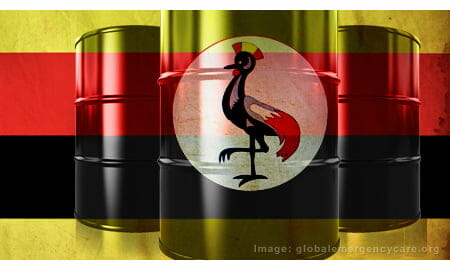 “The hand that gives is above the hand that takes. Money has no motherland; financiers are without patriotism and decency: their sole object is the gain.”– Napoleon Bonaparte

Ugandans elections were predetermined by the muscular oil companies keen on extracting the oil in Uganda as planned. The public needs to understand that as soon as Oil Corporation strikes commercially feasible oil or signs a deal to start extracting the oil, its share price goes up, and more potential investors join the fray.

Three companies have been battling it out to control the oil extraction and exportation in Uganda, and they are notably Tullow Oil (British), Total (French) and CNOOC (China). To give my audience a taste of the bigger picture is that all the three companies had struck a deal, ironed out differences and came up with a schedule for operations meant at mining the oil. In other words, perhaps they were subtly involved in ensuring Museveni gets ‘reelected’ and that the world ‘looks the other way.’

Ugandans and Besigye should understand that this greedy, high-affinity for monetary gain than humanity corporations will do all they can to ‘minimize political risk’ that is by dealing a ‘known’ status quo of Museveni-NRM government.

Just like any other country, a new state by the opposition-led Besigye would have meant uncertainty of the already negotiated deals. Perhaps a new administration would favor another company, cancel tenders and institute new laws. The Total Energy and Petroleum Company that is French owned has been instrumental in diverting the oil pipeline to the Tanzanian route because they would want to start production as soon as possible. The French are far worse than Britons in shelling African and Arab countries. Think of Libya, Ivory Coast, Congo and Burkina Faso. It disturbs me that they are already in Uganda and Kenya, and you can see the level of underhand deals and bullying judging by the Kenya-Uganda pipeline deal.

Back to the subject issue, I am strongly inclined to believe that Total Corporation as a representative of other dirty oil interests was not ready and willing to see a change of government in Uganda. And that makes us Kenyans concerned because the same three greedy oil corporations: CNOOC, Tullow, and Total are in our oil fields. We need to reflect on “It’s not the votes that count; it’s who counts the votes.” Josef Stalin. I will thus give snapshots of public knowledge suggesting that all oil companies felt safe with having Museveni reelected. That is why all inhuman evils can be meted on Besigye as the Western world mumbles.

1.    In October 2015, Bassam Fatou of the Oxford Institute for Energy Studies published a research paper on oil in Uganda. Among other things, Bassam noted that the government of Museveni had sorted out all disputes with investors of oil. Production license was to get FINALIZED in early 2016. Prudence dictates that CNOOC, TOTAL, and TULLOW were uncomfortable with a new government other than Museveni that would reverse these deals and reset everything. These companies would lose investors and shares could tumble.

2.     A Ugandan Radio Network website on 23rd December 2015 Total Energy and Petroleum struck a de facto agreement with Museveni on Uganda using the Tanzanian route to transport the oil as opposed to the pipeline taking the Kenyan route. Common sense dictates that TOTAL OIL CORPORATION would be unwilling and uncomfortable to see another figure run the Ugandan government other than Museveni because part of the changes could include not just delays on oil extraction but abandoning the Tanzanian route favored by Total. Am I beginning to make sense of how well-oiled Museveni campaign was? Pun intended! The same article states that Adewale Fayemi a Nigerian managing director of Total in Uganda had been negotiating with the Museveni government to secure production licenses for the company. At the time, only CNOOC had a production license as total was yet to secure any.

3.    Elias Biryabarema wrote in the businessweek.com that Museveni felt he was the ONLY ONE who could guarantee that Ugandans get value from the oil extracted from their land. Museveni’s government favored an early production as of 2014.

4.    The businessweek.com on August 2, 2015, indicated that France’s Total and Tullow Oil anxiously waited for approval of licenses to start commercial production. The productions scheduled to being by 2018. A critical component to speed up the production of oil is the development of the oil pipeline. That is why Total is the last player in Ugandan affairs by commerce to expect a radical regime change that would heighten political risks in its investment in Uganda. For your information, Total wants three commercial production licenses!

5.    On October 18, 2011, reuters.com quoted Museveni as saying that “That’s my oil, I won’t allow anybody to play around with it.” Ssevo believes that he is the ordained ruler and protector of Uganda’s oil. Museveni, as reported by the site, was not willing to go and leave oil money.

It seems the oil companies guaranteed him of victory and minimal international backlash from the flawed electoral process. In fact, reuters.com is asserting that Museveni’s sudden ferocious affinity for Uganda’s oil will determine whether oil is a benefit or a curse in Uganda. Having gone through delays over oil contracts, Total, and other oil companies were unwilling to see regime change and start tedious negotiations afresh.