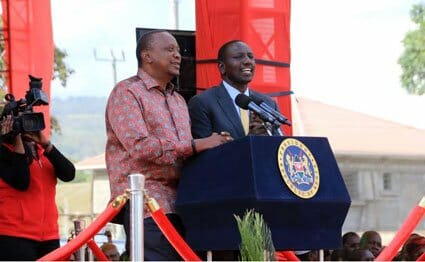 Caption: President Uhuru Kenyatta and Deputy President William Ruto waxing lyrical, posturing, grand-standing and spewing arrogance, as if they had been acquitted of crimes against humanity. Far from it. Meddling, witness disappearance and political pressure destroyed their case.

The case against 6 individuals charged by the International Criminal Court (ICC) collapsed leaving individuals disenfranchised and victims distraught. And without any honour or shame, President Uhuru Kenyatta and his Deputy William Ruto have switched to campaigns-mode, without delivering any of their campaign pledges yet.

Mediocre mainstream media have been as usual, roped-in with financial packages paid with money stolen from the state coffers to do what they know best, while internationally, Kenya’s corruption is becoming a hot subject and the world is now taking notice.

President Uhuru Kenyatta, Deputy President William Ruto and Treasury Cabinet Secretary would be perhaps the three people who know what happened to our Eurobond money, in between Ireland, New York and Qatar where it has been stashed. Rotich, the face of the scandal is even planning to float another Eurobond issue next month, to raise $600 Million, yet Jubilee leaders have stolen $900 Million.

There is growing economic disparity on the ground as widespread corruption overseen by President Kenyatta has resulted in cronyism where sycophants, former classmates and Kenyatta family members are plundering the economy without thinking about the plight of the normal Kenya. Solicitor General Njee Muturi has come to be discovered as the main supplier of uniforms to National Youth Service (NYS) using Turkish front-companies, where Kshs. 40 Billion has gone unaccounted for, forcing over 10,000 recruits to be sent home. 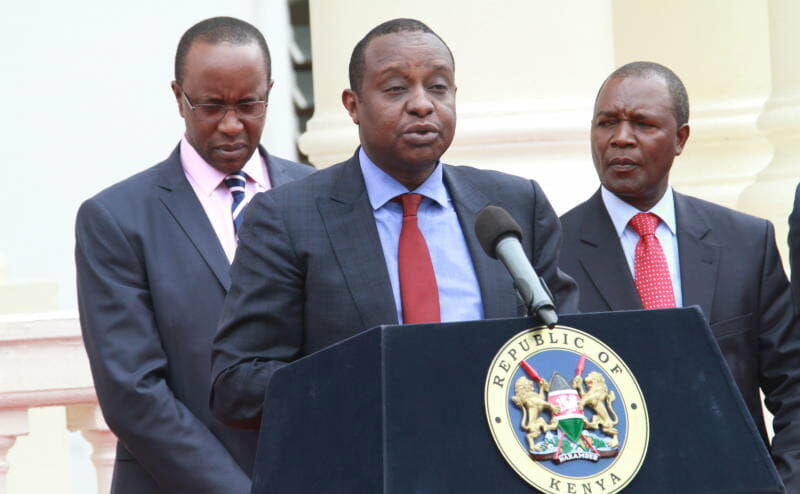 Caption: Some of the Eurobond thieves who might spend their retirement years in a Brooklyn penitentiary Henry Rotich, Njee Muturi and Professor Njuguna Ndung’u.

Njee Muturi is only operating with this type of impunity because he is President Kenyatta’s former school-mate at the disgraced St. Mary’s, where it’s slowly becoming a reality that an Irish priest was conditioning children of prominent Kenyans, whom he head-hunted specifically for his demented social-experiment. Together with other Irish priests “educationalists” within Ireland and especially in Africa who started schools, they were subject of internal probes by the Catholic Church where it was found that students under these Irish priests were victims of botched social experiments and sodomy. Could the strong cult-like bond by St. Mary’s alumni of a certain age-group emanate from  deeper scars inflicted by an idle Irish priest, who was executing a misguided social experiment?

Looters of public funds are not even afraid to display opulence as today individuals linked to the Jubilee axis of thieves imported three Rolls Royce Phantoms with an estimated price-tag of $1.1 Million each, yet we know the private sectors has nobody who can uptake such a spending being that most of Kenya’s profitable companies are foreign-owned. The only person who can afford to import such vehicles is someone directly linked to Uhuru Kenyatta, and given access to looting money; it’s a no brainer. 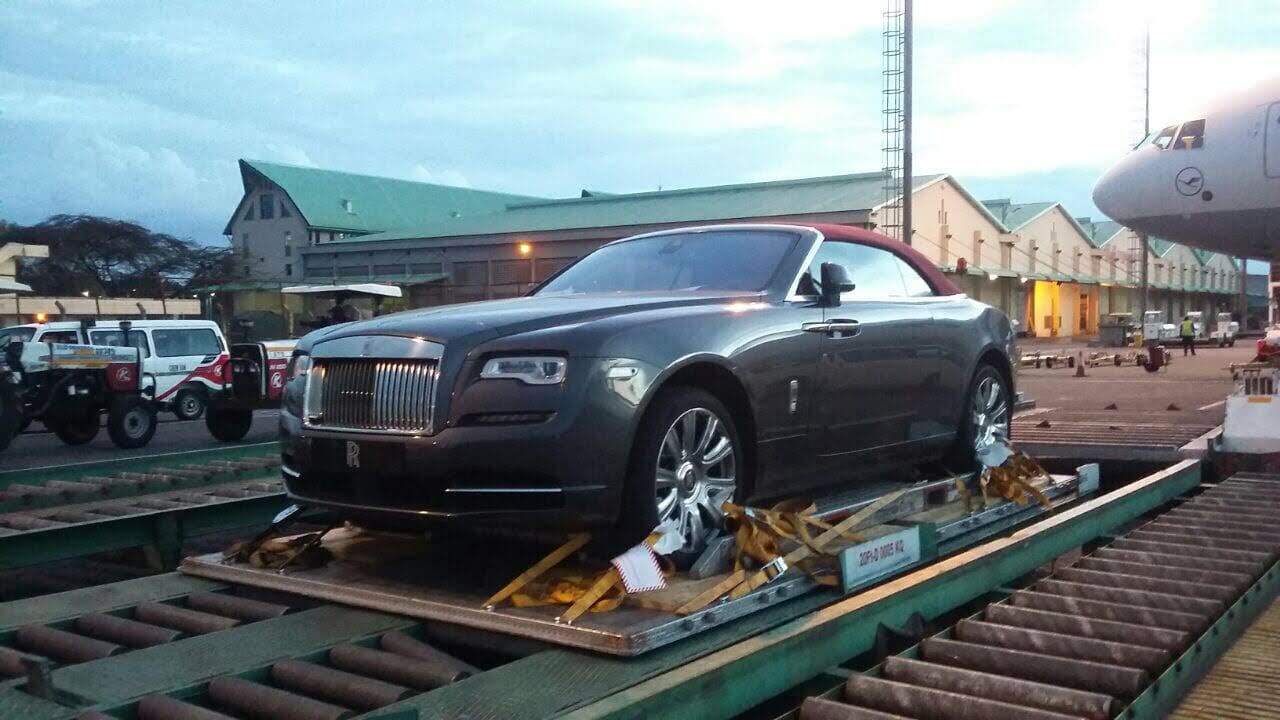 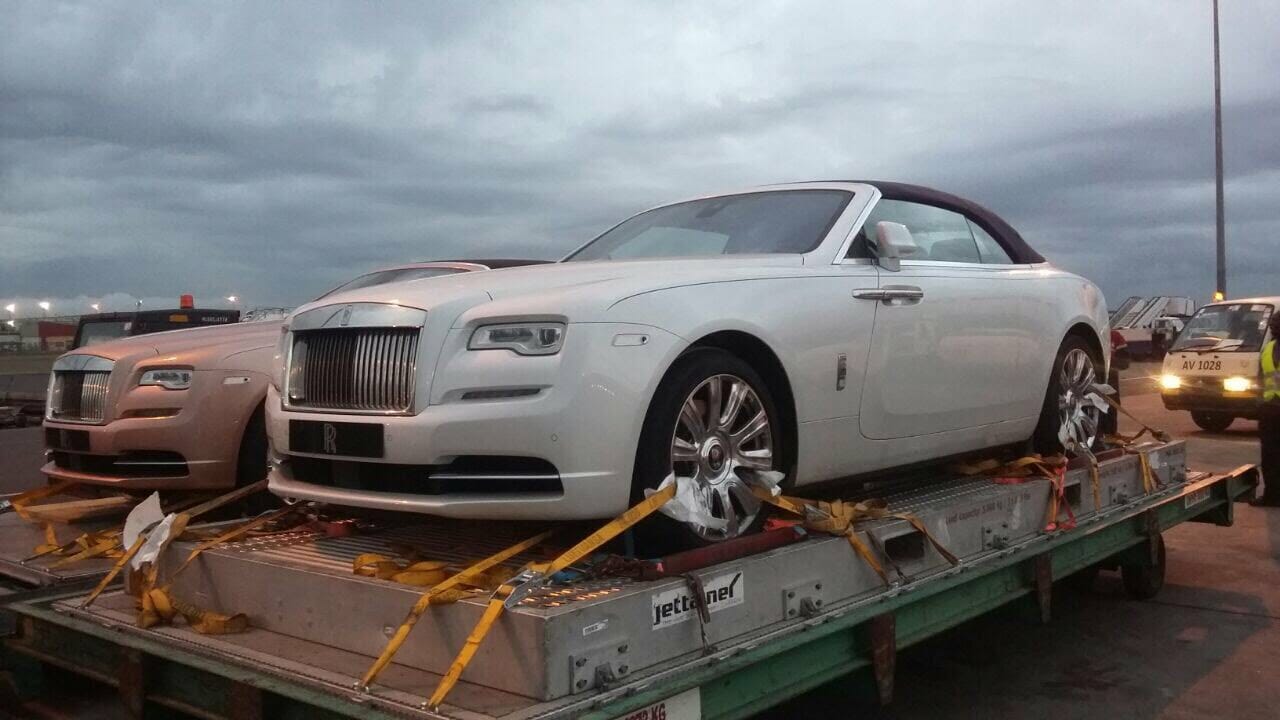 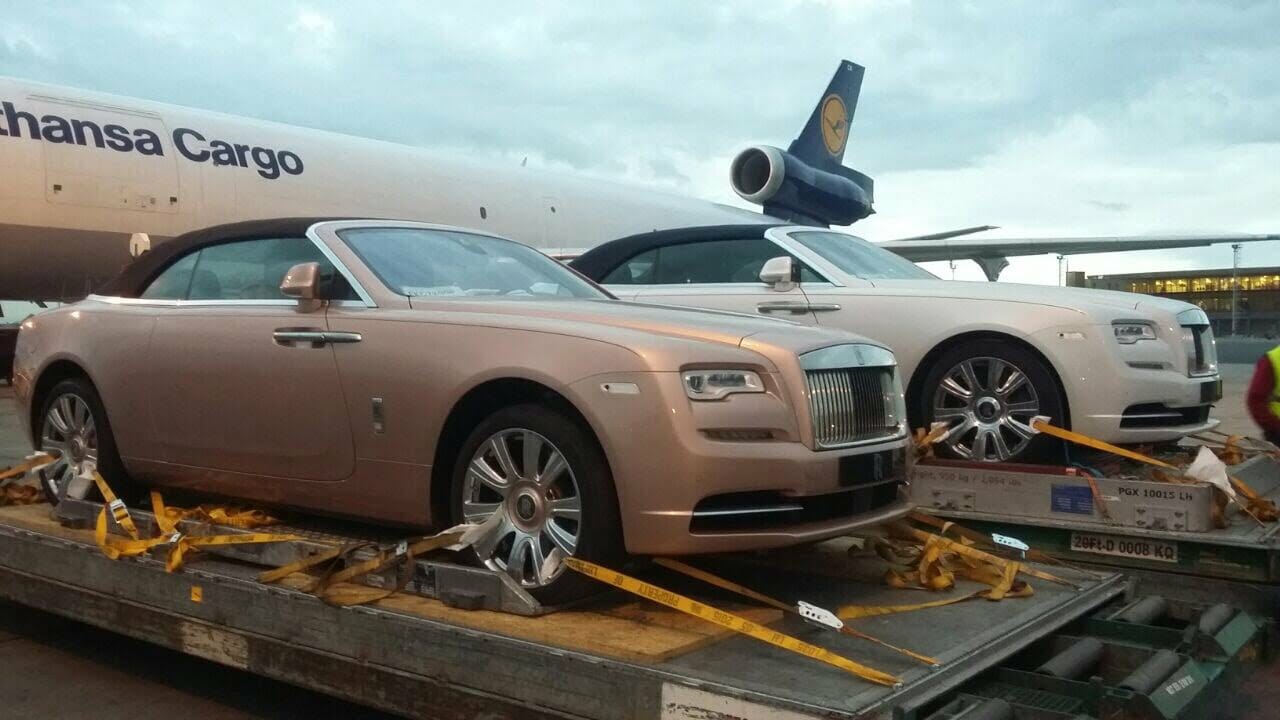 Caption: Photos of the Rolls Royce Phantoms which landed yesterday at JKIA, imported by people who have looted taxpayer funds.

Those are some of the results of Kenyans electing individuals accused of crimes against humanity, and spoilt Brats like Uhuru, who has never had to work a day in his life and would care less about the collective well-being of the country. He is simply trying to make Kenya revert to the Moi-era.

As usual, Daystar graduated-journalists are busy parading these superficial overtures of success, like the importation of luxury cars, opening up of pricey lounges and building of malls, as a gross overall indicator of economic progress, but the wealth is not spreading down to the middle-class.

With the threat of civil disobedience due to economic instability is becoming clearer everyday, isn’t it time the American Government prioritised the indictment of the Eurobond three, because any chaos in Kenya may harm US interests in the region?

This is the reason why; after Chase Bank’s collapse two weeks ago, individuals in Kisumu wanted to set the branch on fire when it finally dawned on them that they were victims of corruption like Imperial Bank depositors. Customers in Rafiki DTM’s flagship branch held bank staff hostage after learning of a withdrawal cap of Kshs. 10,000 per customer. Such are the signs.

The rotten judicial system where judges are bribed to pass favourable ruling for the wealthy elite like the recent case where a grandson of Njenga Karume who murdered his girlfriend in the most gruesome of ways, is a recipe for chaos.

We saw Nzioka Waita playing dumb, yet he had prior knowledge of Chase Bank’s closure and also informed his former colleague at Safaricom to withdraw their funds and investments into the bank’s private placement (share capital) just 2 days before its collapse, yet they were the same characters who were trying to deflect attention on their corrupt practices by blaming social media for the bank-run that triggered Central Bank’s intervention. 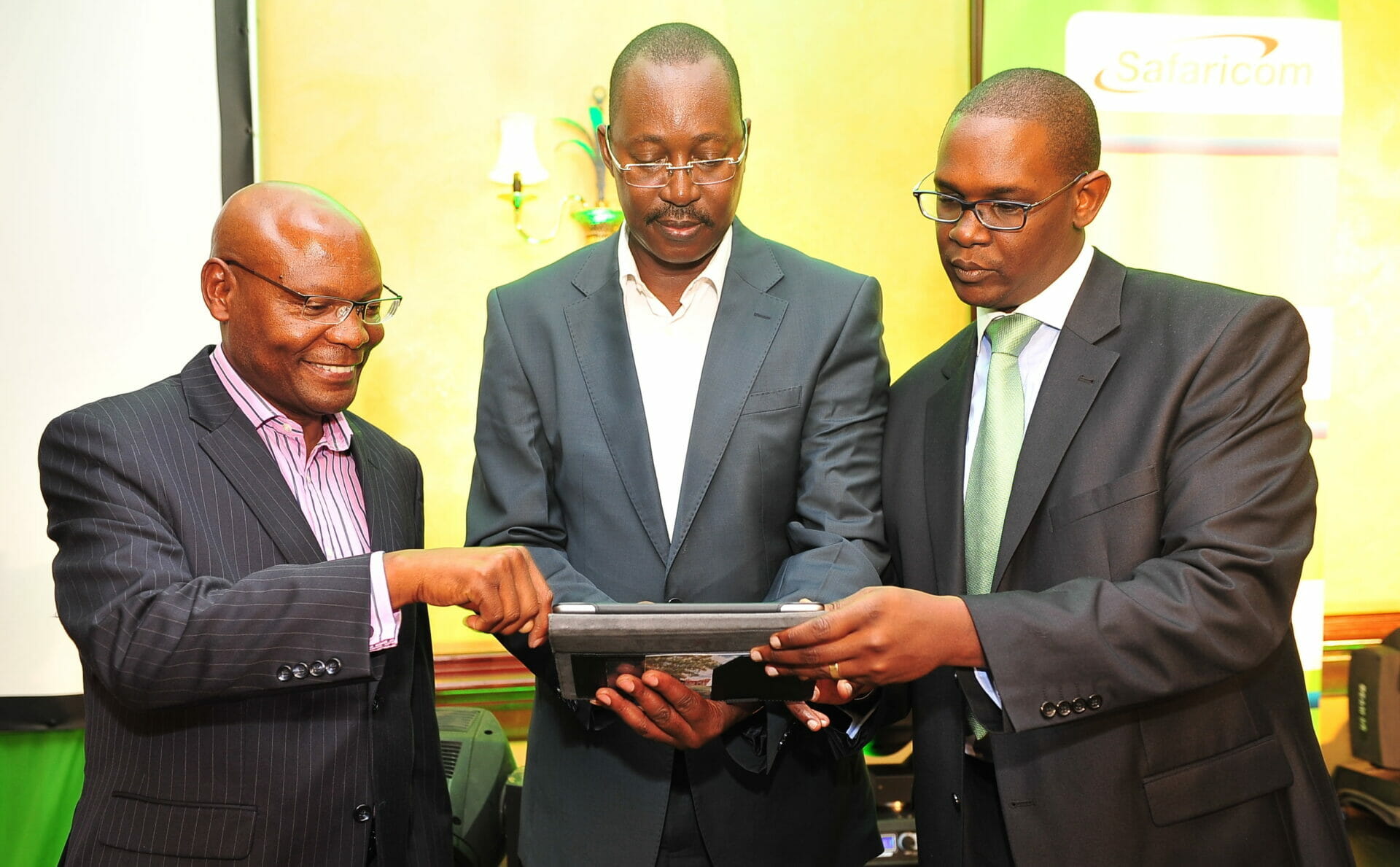 Caption: Corporate crooks like Nzioka Waita and Bruce Odhiambo have infiltrated the system with their fake St. Mary’s accents.

Clearly this system is rigged to favour the select-few and disadvantage the vast majority who keep the economy running. And with every belligerent and arrogant statement by Uhuru, where like in Afraha stadium, he used coded messages to wax lyrical about his political detractors, pushes the citizenry on the precipice of civil disobedience.

Our activists we have come to discover, thrive in the status-quo. Without corruption, there would be nothing for them to make noise about, and solicit for donor money with. They issue mild statements, heckle on television, and even become celebrities all purporting to fight a common cause of justice and equality, but that’s all. Their interests are inextricably intertwined with those of the establishment, and each feeds off each other’s actions. The real axis of evil.

The future now belongs to social media as all other avenues to air grievances have been compromised. We have to maintain social media’s autonomy so that a normal Kenyan like Zawadi David can inform us of malpractice at Chase Bank. We have to pay special attention to Lady Justice Mumbi Ngugi who is on the verge of being the first woman Chief Justice in Kenya, because on Tuesday 19th April 2016, she will rule on Section 29 of the Kenya Information and Communication Act Cap 411A and it’s unconstitutionality for being vague, overbroad and infringing on freedoms of expression as enshrined in the Constitution of Kenya. 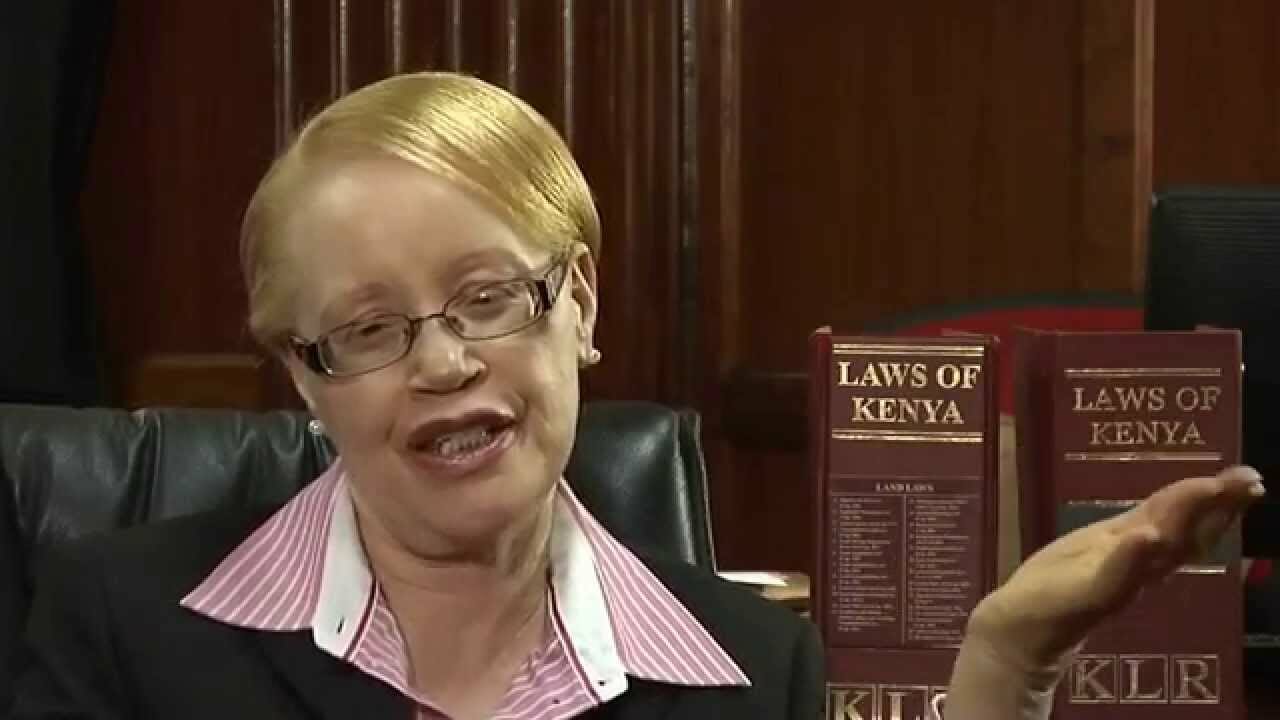 Caption: Lady Justice Mumbi Ngugi on the verge of a historic ruling.

All bribed journalists and mediocre editors like Linus Kaikai who just moonlight in offices filing their nails or eating air-burgers must dispatch their OB-vans to cover this historic ruling, because Lady Justice Mumbi Ngugi is at the centre of Kenya’s most important petitions. All eyes of Kenya will be on her. 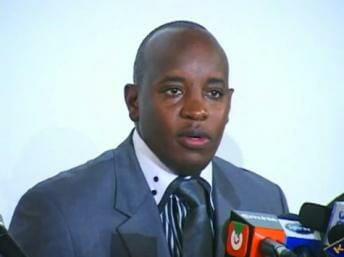 As regards to the Eurobond crisis, Henry Rotich and his puppeteers will be retiring in Brooklyn jails as American public broadcaster PBS aired this week, a series on corruption in Kenya. The series specifically singled out the Eurobond issue and linked two American banks CitiGroup and JP Morgan who were complicit in using the US financial system to launder money on behalf of corrupt Kenya Government officials.

Indeed we are now confident more than ever, that after the airing of the corruption piece by PBS, United States Attorney General Loretta Lynch will succeed where Fatou Bensouda failed. Henry Rotich and his plans for a second Eurobond issue, can be rest assured that US Justice will be served on them cold. Believe it. American investigators aren’t like Kenyan CID where Ndegwa Muhoro was bribed by Nahashon Nyagah in order to defraud a foreign investor. They work and they deliver. 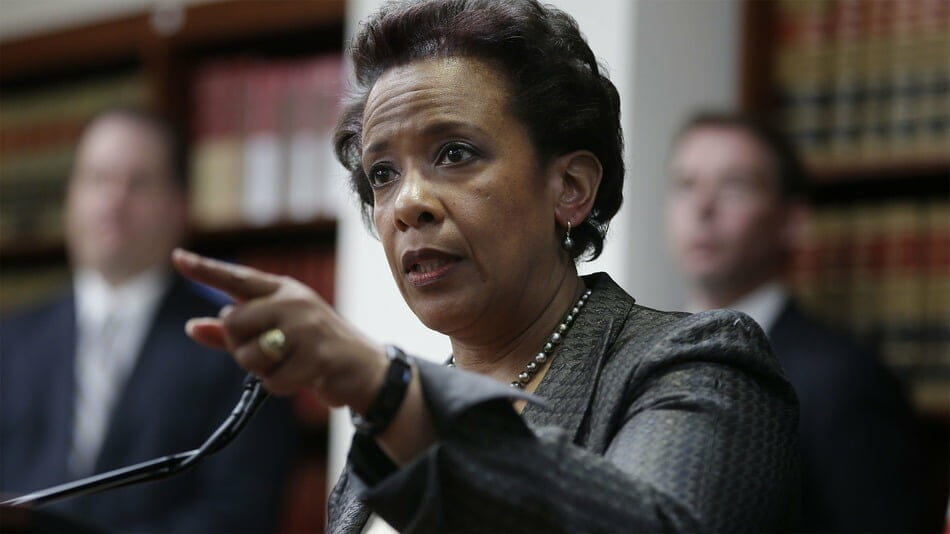 Caption: “We are coming for you” What United State Attorney General Loretta Lynch seems to be telling Henry Rotich, Njee Muturi and Co.,