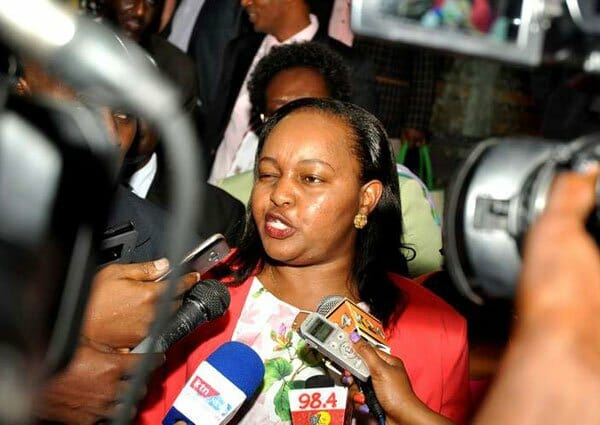 Anne Mumbi Waiguru, who succumbed to pressure and quit Saturday, is said to have had a complicated relationship with her juniors at the Devolution ministry.

In a world where corruption can become an election campaign slogan overnight, Ms Waiguru was made something of a Jubilee poster girl for corruption — an image she considered unfair — which according to State House insiders could have complicated President Uhuru Kenyatta’s 2017 re-election.

Ironically, Ms Waiguru was also considered one of the most hardworking Cabinet Secretaries in Jubilee with her ministry earning several awards for good services, including the much praised Huduma centres and the revamped National Youth Service.

The contradiction is that Ms Waiguru mirrors the internal struggles within Jubilee that seem to have paralysed its decision-making capacity at the ministry where cabinet secretaries seem to be moving at a snail’s pace to achieve targets.

Those who know Ms Waiguru well say she likes taking three cups of strong tea in the morning to get her going.

A daughter of a police officer, she observes military precision in whatever she does.

And no, she does not believe she is arrogant.

Those who know her say that she believes that speaking her mind and taking firm positions is misconstrued as arrogance, especially when it comes from a woman.

And she believes she is one of the victims of such misconception.

ADMIRABLE CAREER
A sharp dresser, she suffers no fools gladly and does not understand — going by her statements in Parliament — why Kenyans just won’t get it: She’s not the accounting officer and therefore could not bear the cross.

Those who know her well believe she is smart and leverages on the weakness of bosses she has served.

“She is very smart, studies her bosses’ habits and understands their weaknesses which she uses to her advantage. For instance, you will have reports on your desk as early as 7 am. She can churn out one proposal after another. She works very hard,” says one of her former bosses. A mother of three boys, Ms Waiguru is said to be very close to her two sisters — Scholastica and Loise — and her brother who used to work for British Airways.

Loise, a lawyer, is the elder sister and used to work for a law firm on Nairobi’s Loita Street but now works at the Devolution ministry.

Ms Waiguru came to government in 2003 at the Cabinet Office, which was headed by Francis Muthaura before serving at the Foreign Affairs ministry.

She attended the prestigious Precious Blood High School, Riruta, then Moi Forces Academy in Nairobi where she sat her A-Levels in 1989.

Ms Waiguru has a Bachelor’s degree in Economics from the University of Nairobi and a Masters in Economic Policy from the same institution.

Before Cabinet Office she was at the Kenya Leadership Institute, which exposes university students to public policy.

She then moved to the World Bank as the Eastern African Regional Representative for the Parliamentary Network.

She was charged with coordinating MPs monitoring World Bank projects in eight countries.

But her first stint in the Kenyan civil service was when the World Bank seconded her to the Cabinet Office as a technical adviser on issues of governance, leadership and public sector reforms.

LIST OF SHAME
She was later to replace Mr John Githongo as head of governance after the position was downgraded to a department in the Finance ministry.

This was after the former PS fled the country after accusing President Mwai Kibaki’s ministers of corruption in the Anglo-Leasing deals.

But it was during the Grand Coalition government that Ms Waiguru’s real mettle in public service was first felt.

Her job was to implement the Economic Stimulus Programme and as the Head of Governance, to ensure that the Sh22 billion programme went to the intended recipients in all constituencies.

She later oversaw implementation of the Integrated Financial Management and Information System, the pay system that was used to swindle close to Sh800 million from her ministry.

She was the first Director of Ifmis, which forms one of the strands of the investigation by the Ethics and Anti-Corruption Commission.

The commission has clarified Ms Waiguru is not being investigated for corruption after Cord Leader Raila Odinga sensationally held a press conference to say that her name was removed from President Uhuru Kenyatta’s list of shame tabled in Parliament in March.