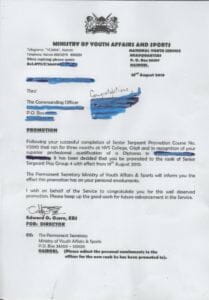 In December 2009,the National Youth  service invited all section officers with Diploma to present them before departments promotion board.The department then invited officers for interview at the N.Y.S. headquarter’s in Feb 2010

The successful candidates were directed to report to N.Y.S. collegeG ilgil for Seniors ergeant promotion course that started on 15/03/2010up to 24/06/2010.Further,the department conducted suitabilityinterviews both at unit andN.Y.S.headquarters’s for section officers,section commanders,inspectors and chief inspectors (serving officers)in  linewith the requirements of the scheme of service scheduled for implementation on July 2010.This took place as from 19/04/2010 up to the end of April.How ever, those officers already insenior sergeantpromotion course were exempted from theinterviews. By late June the promotion course ended and acolorful celebration presided by the then Director GeneralN.Y.S. and attended by the parents and friends. The sameceremony also marked the launching of scheme of service and conversion of ranks to comply with the scheme of service.
As from first July 2010,the new ranks were displayed by the officers,letters reflecting the new developments issued to the affected officers.However,the officers who took senior Sergeant’s course were not issued with any letter to that effect nor displayed their ranks.Approximately one year latter,one of the dairies carries an article on the same.This generated a series of events . All the letters issued on conversion of ranks were hurriedly  replaced by the ministry (word per word) with the heading changing to promotion and an additional sentence informing the officers that it was a replacement letter.Another letter was issued by the department to the group that participated in the promotion course informing them of their promotion that had been backdated to late September about two months after completion of the said course.The same has never received any reply from the ministry up to date.This generates a few questions;
1.was this promotion course  necessary or was just a waste of human and financial resources?
2.Is this scheme of service of N.Y.S. valid ?who is mandated to implement the same ?
3.How are succession  issues handled in the government departments as the N.Y.S. has survived  with a vacuum in the rank of senior sergeant despite training qualified officers as per the requirements?
4.Is it a common practice to promote any one to  a rank not interviewed for? was it an initiative to train about fifty to sixty officers and about four hundred plus joins the group in getting promotion of the same rank? It may be very cheap and economical any way.
5 .The first forwarding letter(of promotion letters) from the ministry, had about thirty names of officers who were in senior sergeant’s promotion course giving them news of their promotion to the rank of corporal (note it was after the article in the dailies highlighted on their fate).The second letter,(using the confidential file) from the department to them was dated about two months  after the dates of the promotion letters from the ministry.This was probably not only a move to block their promotion but also to confuse them as the timing gave the first letter advantage over the latter up to date.This gives an impression that the promotion
never was.
However ,this is not the case with senior officers who get promoted in a totaly new set of rules.The latest case being promotion of about 25 senior officers in the department to the rank of senior deputy director II who were promoted to their current rank by appling for the vacancy of the post in 2014,getting their promotion and being saved the agony of appearing before the promotion board.How many set of rules does the department apply particullay when promoting uniformed  officers.?[for junior ranks ,wait for years before they get confirmation in promotion while senior officers get promotions at the comfort of their offices just by appling for a vacant post]
Would you like to get published on this Popular Blog? You can now email Cyprian Nyakundi any breaking news, Exposes, story ideas, human interest articles or interesting videos on: [email protected] Videos and pictures can be sent to +254 710 280 973 on WhatsApp, Signal and Telegram.