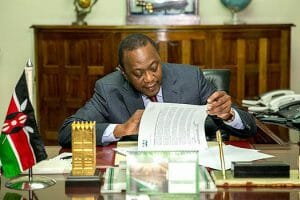 President Uhuru Kenyatta on Thursday sent signed letters to relatives of the Kenyans who died in the Garissa University attack, a move that has been hailed by some as bold.

However, while the letter will go a long way to console and commiserate with the affected families, much more would been achieved had it incorporated these nine aspects:

The mourning families would have appreciated the word sorry. However, not once in the letter does the head of state say he is sorry. The closest he gets to achieving this is at the tail end where he says “accept my condolences and that of the entire country”.

Towards the end of the now well too familiar security advert featuring the president, he says “security starts with you”. That much we agree. But we add security ends with the president. He may have juniors who are actually supposed to main peace and security but as the commander-in-chief and the Head of State (political scientists will tell the state alone has the right to use or authorize the use of physical force) the buck stops with him. Instead the letter says the government has done a lot to contain the threat of terrorism but how much is enough to the mother who listened live on phone as her daughter was shot dead? When dealing with wounded souls, taking that responsibility would not be too much to ask.

After apologizing and taking personal responsibility, the Head of State would have sought forgiveness from the affected families. This is missing. It might be a formality but would go a long way in assisting in the healing process.

The letter lacks the personal touch. Consider what Michelle Obama told relatives of the Sandy Hook shooting incident in an open letter: “As a mother of two young daughters, my heart aches for you and your families. Like so many Americans, I wish there were something — anything — I could do or say to ease your anguish.” President Obama actually shed tears addressing the affected families. Mr Kenyatta’s letter does not attempt to put him in the shoes of the affected families even for once. It also does not seek to understand the type of person the depart was and the unique situation each family finds itself in as a result of the attack.

What if the president “dropped everything else” and dedicated a few hours to pen the condolence letters? Would it have had more power than a typeset template where you only substitute the names of the victims and exchange he with she? Just a thought.

In one of the lines, Kenyatta says: “My government assures you of justice for this brutality. We pledge to work harder for a better and more just country in honour of the memory of those we have lost”. That much information is important. A father has vowed never to take his kids to university because he lost a son in the Garissa attack and another in 2010 during Makerere University demo. Also, the brother of the Recce squad officer who was shot dead during Garissa attack last week was killed in Oct 2012 by Al Shabaab in Garissa. Surely, these families needed some reassurance.

7. My security team is incompetent

The response time was wanting and State House spokesman Manoah Esipisu admitted as much on Thursday. Also, there was credible intelligence warning of a looming attack on universities in Nairobi. Was the information shared with Garissa University? Did the college management fail to advice the students to be more alert? Somebody must have slept on the job.

It has been business as usual after every attack except for a few sackings where the officials are given soft landings. The families would find solace in the guarantee that those who failed their kin at the hour of utmost need would take personal responsibility.

There is something imperialist about the reference “my government” which appears thrice. The letter should have been in first person without proclaiming who owns the government.