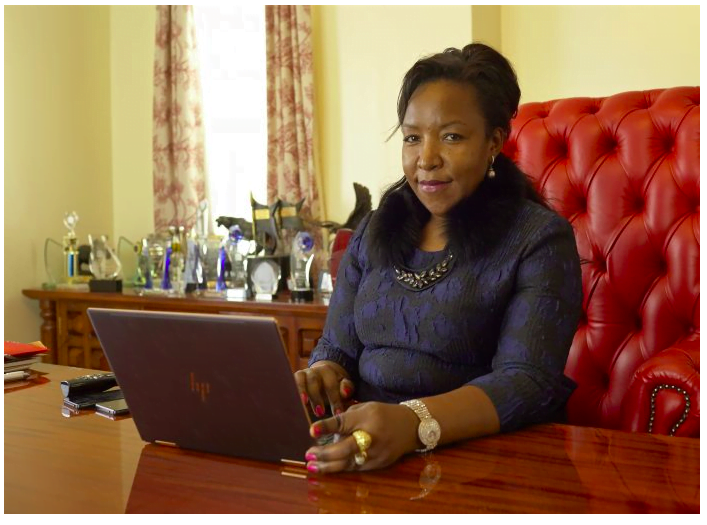 CAPTION: Scandal laden Agnes Kagure: From fake papers, land grabbing to tax evasion: This should not be the face of Nairobi

Following besieged Governor Mike Sonko’s recent impeachment, up to seven contenders have already declared their interest in Nairobi’s vacant top seat in what looks to be an interesting race in the by-election slated for February 18 this year.

Compared to her pro-handshake counterpart and co-chair of the Building Bridges Initiative secretariat Mr Waweru, Agnes might not be that popular within the larger Nairobi community, but from her litany of scandals which we are about to expose, it is clear she is certainly just as crooked and ruthlessly opportunistic as they come.

To help you paint a clearer picture, during one of her most recent attempts to scale her way up Nairobi’s power ranks through the backdoor, Ms Kagure in 2018 tried pushing to be appointed the Deputy Governor for Nairobi, following Polycarp Igathe’s resignation.

Unfortunately for her, however, this was not to be since not even the millions she invested in a massive PR overdrive could cover the horrid stench of her scandals from spreading across town like a wildfire.

Soon enough, she was forced to back down from her ambitions as many damning reports, including rumours of an alleged fake degree from a Thai university threatened to assassinate her political career.

In a letter dated March 2018, the Chiang Mai Rajabhat University of Thailand publicly humiliated the wanna-be-bureaucrat after they declared she was unknown to the institution and that her name did not appear on their graduation list of 2014 as she had previously alleged.

“Kagure Kariuki is not a graduate of Bachelor of Arts degree from this university. According to our records, the aforementioned individual does not appear in our graduation list of 2014 as purported in your enquiry letter. Therefore if there is any academic certificate possessed by the individual it should be treated as fake and forgery,” read part of the official communication by the management. 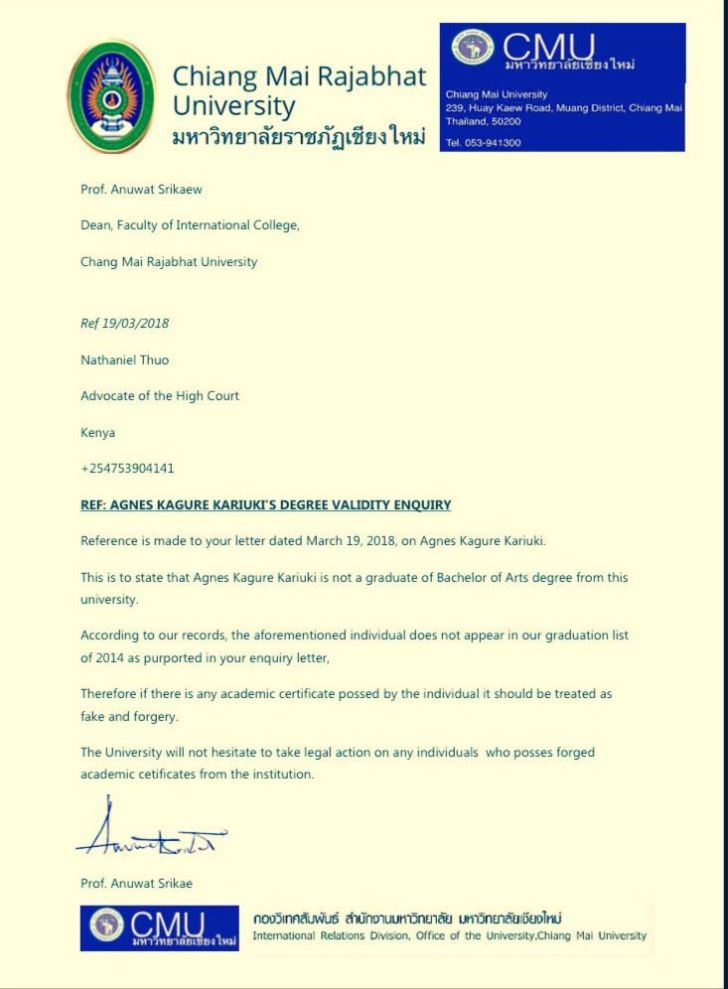 In an attempt to stop any further damage to her already tainted reputation, Ms Agnes Kagure, in a move that screamed “Guilty!”, rushed to court in April 2018 and obtained a gag order against several media outlets, including Radio Africa Group, whose sister publication company, The Star Newspaper, had published several damning stories exposing Ms Kagure’s rot. 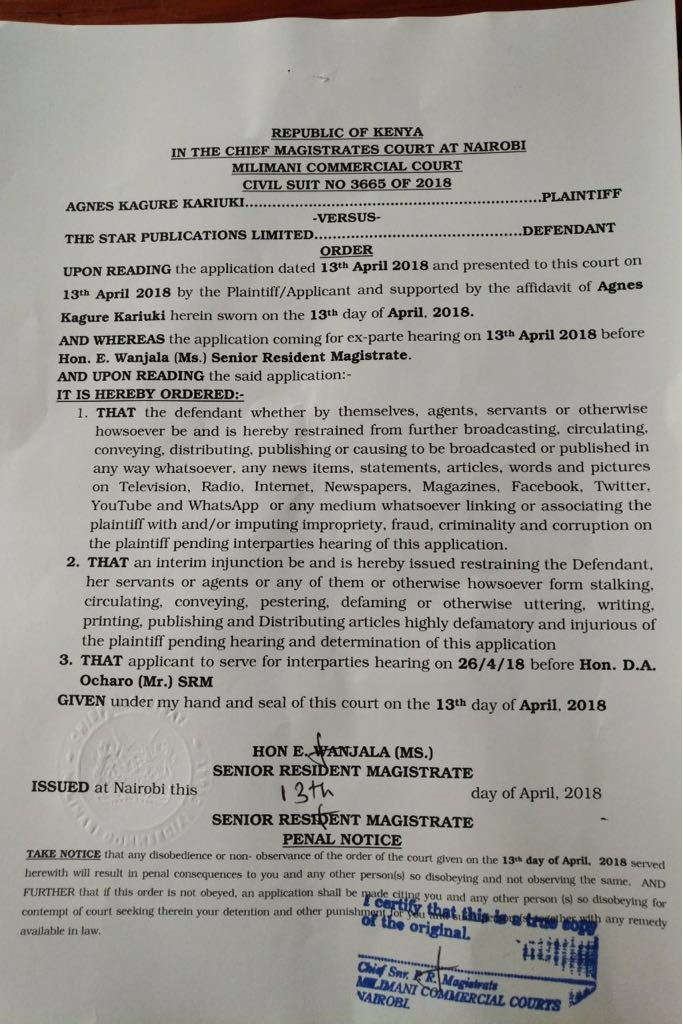 Days later, many of the publications magically disappeared.

From the taxman’s records, Ms Kagure started filing her tax returns with the Kenya Revenue Authority in 1996 but stopped for a period of 11 years from 2004 and 2015.

Between those years, there is no documentary evidence of her ever filing any returns with KRA.

In 2016, just a year to the general elections, she resumed filing returns, which are a self-assessment.

From the documents, she seems to own rental houses and from her monthly rental collection, she is legally bound by law to submit 10 per cent, which she didn’t. 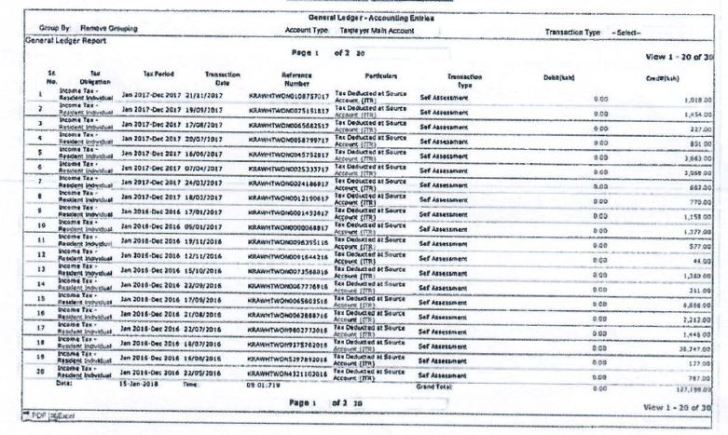 A search on the Company’s Registrar shows that Antonio’s Grill is just a business name, while Dynamic Mini Mart and Consolata Pharmacy have no records with the Registrar.

Universal Nautical, registered under CPR/2012/86325 in KRA records, has never filed returns ever since it was registered on October 11, 2012, with shareholders listed as Edward Gitugo, Agnes Kagure Kariuki and Isaac Kariuki Ndegwa. 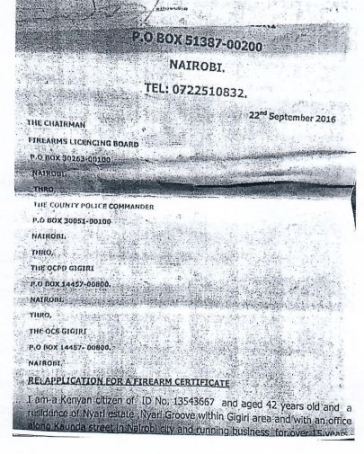 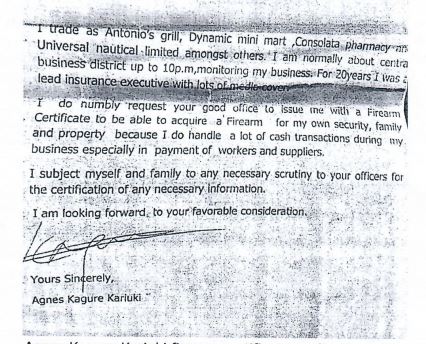 In 1995, after completing her secondary school, Ms Kagure, who prides herself as a successful Insurance broker, travelled to Nairobi for the first time where she got her first job as a sales agent in one of the top insurance companies, ALICO.

She would later move on to work at Liberty Life, where it is alleged she was dismissed over claims of defrauding clients.

In 2011, Ms Kagure was named in the Top 40 women under 40, an annual list of women who have risen to occupy positions of influence in Kenya before the age of 40, published by the Business Daily.

But the exact reality of how she acquired her wealth is known. Nothing on earth can be hidden.

In the backdrop of that fancy profile is a stream of land grabbing cases spread all over Nairobi courts.

One of the most prominent the ownership of a property in Karen estimated to be worth over Sh1B.

The property in question is a 5.2-acre property on Ushirika Road, Karen.

In the case, she claimed that she bought it for Sh100 million in cash from the late Roger Bryan Robson, an elderly British man and Kenyan citizen who died on August 8, 2012.

She had alleged that she paid in cash which would have been a clear contravention of Central Bank of Kenya regulations that demand that any transaction above Sh1 million must be paid through a bank transfer.

It was later found that the transfer documents were forged.

Reports claim that Agnes Kagure currently occupies the said property in violation of a court order dated July 2015 for maintenance of the status quo, pending the hearing and determination of the case.

It is even alleged she has built a perimeter wall and some structures.

Although Agnes claims to have bought the property on November 18, 2011, the transfer was not effected until November 6, 2014, a whole three years later.

The conveyance agreement, drawn in 2011, was not stamped until 2014 and there are no records for the payment of stamp duty.

She is also in court over another plot in Nairobi’s Umoja, in which the court has called for a full trial to determine how she bought the property, which is also claimed by one Joel Munene.

The case involves a plot in Nairobi’s Umoja Inner Core known as Nairobi Block 83/1903 which one Joel Munene claims to be the legal owner having bought it from one Erastus Nyaga Timothy; who bought it from the original owner known as Silas Mugo Kithenji.

Kagure swore an affidavit dated where she claims that she bought plot number A28-Umoja Innercore Section III from Joseph Chege Muturi on in 2016 and was issued a certificate of lease over this parcel of land.

Why Agnes Kagure Should Not Be Nairobi Governor

From her digital footprints, it is clear that Agnes Kagure is purely a political opportunist with a thirst for power equal to her male counterparts.

For instance, in a hurried bid to win the masses, her Twitter account was set up on March 11, 2018, just six weeks after Igathe resigned.

Same as her Facebook Page which was created on February 11, 2018, just 2 weeks after Igathe’s resignation and remained inactive till March 10, 2018 when it took off due to heavy advertising, and now has over 60k followers.

A website agneskagure.com, which she registered on March 10, 2018 and had no significant details, has also since been pulled down.

Agnes also claims to be the Principal of The Insurance Consulting Group, but from a simple e-citizen search, the firm does not exist.

It is clear beyond any reasonable doubt that Agnes Kagure Kariuki falls short of the threshold established under the Constitution to hold a public office until she clears her name of the allegations levelled against her which may have to await the determination of the cases pending in court.

In view of that, the best cause of action is to drop the name of Agnes Kagure Kariuki from the list of the potential successors of ex-Nairobi Governor Mike Sonko in order to avoid the potential of conflict of interest or demeaning the office given her poor personal integrity, incompetence and non-suitability.