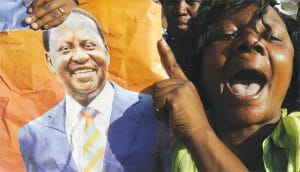 Raila is shocked that Uhuru has declared war on corruption. Yesterday, in a statement read by Florence Mutua, Raila dismissed President Uhuru Kenyatta’s directive to fight graft that has threatened to reverse the economic gains this country has made.

Raila is being insincere and I think he is ashamed that the president is trying to clean the mess that people- Including Raila created. Being opposition doesn’t mean you should oppose everything including the bold step the president has made to fight graft. What is Raila trying to tell Kenyans? This is Bullshit.

Raila should also be investigated. The Kisumu Molasses plant scandal cannot be swept under the carpet and it is time all historical graft cases are reviewed. The Kazi kwa Vijana But Pesa kwa Wazee scandal should also be reviewed and all people who were mentioned including Raila locked up in a small room till they clear their names.

I was shocked when Wetangula criticized the President’s Bold Move. Because of that, the Tokyo Embassy Scandal should also be reviewed. Kalonzo should keep quiet because he is politically irrelevant and a shame to this country. He has served his people for many years but there is no development- He can only brag about poverty and suffering.

Raila’s claim that Uhuru is not committed to fight graft is hypocritical. What does he want the president to do ? Lock him up because of Kisumu Mollasses plant or Kazi Kwa Vijana project to demonstrate that he is committed?

Raila knows that if President Uhuru fights graft, chances of him ascending to power in 2017 will be minimal. After all the buck in the war against grand theft stops with the president and since the institutions mandated to fight graft have failed, they have to be pressurized to act.

It is time Raila shuts his big mouth and joins in the war against graft.