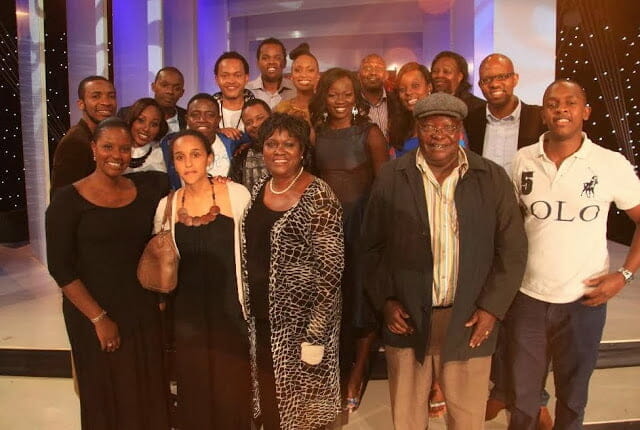 Caption: Peter Mburu (in glasses) former EABL Marketing Director and husband to Uhuru’s niece Ngina Pratt at Tusker Project Fame 2013 where Kavi Pratt performed a very bogus song. EABL handed her the platform solely for political-patronage.
The man whose incompetence and outright corruption that’s about to cause Kenya’s biggest recession in history Professor Njuguna Ndung’u is walking scot free instead of rotting away in Kamiti Prison.

So why is the bad Professor still free, enjoying his ill-gotten wealth?

Well in December 19th 2012, there was a function where Peter Mburu was doing a tradition wedding/paying bride-price for President Uhuru Kenyatta’s niece and Daughter of Uhuru’s sister Ngina Pratt.

Ngina runs the Peponi School on the vast Sukari Ranch, while Peter Mburu is the son of Mburu Karanja, former Managing Director of Kenya Breweries and brew-master of Tusker Malt Lager.

During the function, attended briefly by Uhuru Kenyatta, then a presidential candidate, Professor Njuguna Ndung’u was acting as master of ceremony and representing Mburu’s family at negotiations.

With such close ties, who in their right minds would even entertain the theory that President Uhuru Kenyatta can order the arrest of Professor Njuguna Ndung’u? Anyone harbouring such delusions probably also believes (quoting Irene Kendi) there are virgins in maternity wards.