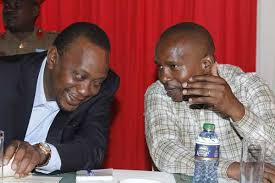 President Uhuru Kenyatta’s recent visit to Meru region to drum up support for the new political kid on the block in Jubilee Alliance Party has left the area more divided.
It was the president’s first visit to the vote-rich county since his win. Alliance Party of Kenya’s has joined Jap in a scheme said to be aimed at countering deputy president William Ruto linkmen in the region which voted for Uhuru as an individual. Senate Majority leader Kithure Kindiki allied to Ruto has brought local politicians to his camp to checkmate his counterpart Kiraitu Murungi. Kindiki is said to have constituted a group of professionals led by former Kenya Broadcasting Corporation deputy managing director in Moi regime Muthui Nyamu to work on logistics to tame Kiraitu’s team.
Kiraitu, the party leader of APK is already working with Jap ahead of 2017 elections going by his body language and deeds, while Governor Peter Munya has left many guessing.
During his visit, Uhuru pet topic was Meru leaders to unite.
He first landed at Marimba together with Ruto and a number of local MPs. He officiated the opening the Meru-Marimba-Nkubu-Mitunguu road and Imenti-Kionyo-Chogoria road.
During his two-day visit to Meru, Munya, Kiraitu and women representative Florence Kajuju played a central role with Kindiki faction being sidelined.
It is said the Kiraitu camp were behind the programme that saw Uhuru open a fresh produce market.
The supremacy battle for the control of greater Meru politics was witnessed during the tour.
Uhuru skipped a meeting at Uru area where he was to be received by Senator Kindiki. To show that he was not in support of Kindiki but has a soft spot for Kiraitu, the president went straight to Karienye market where Kiraitu and his team aware of the plot were set to receive him. Kiraitu was in high spirits throughout the visit and at one time was overheard telling a State House official we are on top of things and do not worry.
During the functions, Kindiki team was never recognised forcing MPs allied to him to step in to have him address the rallies. Kairatu had openly ignored him and never referred to him.
Analysts are wondering loud why the president did not come to Kindiki’s rescue during the tour despite the fact he was well aware of his presence. Insiders say that Uhuru is bitter that Kindiki sidelined him and never consulted the head of state when he declared to be Ruto’s running mate 2022.
To Uhuru, being in control of larger Mount Kenya politics and out to influence events in post- Uhuru era, it was better to be consulted. The Kikuyu vote is paramount and a lot of consultations need to have been worked on before Kindiki made the ambitious move. Fear is, Kikuyu elite are also out to front one of their own to be Ruto’s deputy if Jap lives to achieve its goal.