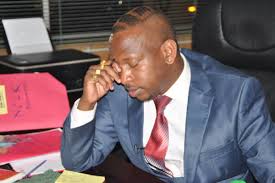 Why would Uhuru dump Me ? That is a question that is in Mike Sonko’s Mind. The cold fact is that President Uhuru has decided to dump Sonko after  thinking about this issue for a very long time. Sonko used to be very close to the president. He could  call him directly in case of anything urgent. I think you all remember when Sonko called president Uhuru and put him on a loudspeaker. After that, His calls to state house were blocked. I remember Tweeting about it But I was threatened, abused and branded a rumor monger. That was the truth, Sonko’s calls were Blocked…End of the story.

The TNA Operatives dont want Sonko: They have been spending sleepless nights to alienate Sonko. Many of those plotting against him have always said that he is an embarrassment to the Jubilee government. But why would Uhuru dump a man who stood with him during the ICC Trials ? The answer is simple…Sonko has no political clout . How ? Let me delve in and shed more light .

Just when he thought everything was working out smoothly after the termination of his ICC case, President Uhuru suffered a humiliating defeat in the Kajiado Central By Election.
Many people are wondering why the Maasai did not vote in Tutui even after Uhuru appointed one of their own as interior Cabinet Secretary. Well, It seems the stubborn Maasai know why they showed Uhuru the middle finger.
Sources have confirmed that the president is furious that Duale and Sonko misled him. Duale was to deliver Muslim vote to JAP and Sonko the Kamba- something they failed to do. It is not a secret that Uhuru is losing the Muslim votes and must do something before 2017. The president was very furious and didnt even want to see the Two, who Misled him.
The President’s political strategists have referred to Duale as a loud mouth who has lost his political clout among the Muslims.

So who will Replace Sonko ? Let me delve in

Senator Mike Sonko  will face the monied Dagoretti South MP Dennis Waweru. The two will battle for Jap nomination. Waweru convinced Waititu to shift base to Kabete by-election and run for Kiambu governorship, come election time.
Waweru has managed to bring to his side all Kikuyu MPs in parliament and a number of MCAs allied to TNA.
He is inheriting Waititu vote block and has Starehe MP Maina Kamanda on his side. Kamanda has no time for Sonko. The MPs say Sonko has no money compared to Waweru who is the brains behind Faida Bank.
The anti-Sonko MPs are Yusuf Hassan of Kamukunji, Benard Mutara, Makadara, Waihenya Ndirangu, Roysambu, Gakuya Mwangi, Embakasi North, John Ndirangu, Embakasi Central and Kamanda. According to Waweru side, no serious MCA is fully behind Sonko.
They have been moving across the county selling Waweru as State House preferred candidate for governorship. They say Sonko used the Kikuyu community to win senatorship and has failed to deliver two by-elections that of Mathare North and Kajiado Central to Jubilee despite being facilitated with millions.

There you have it