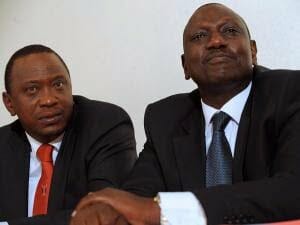 Sources within the corridors of power have confirmed that President Uhuru and his deputy were initially planning to attend Fidel Odinga,s burial in Bondo as chief mourners . But what happened ? CID officers were dispatched to Bondo to study the situation and realized that there were plans to heckle the Two leaders.

This is because they think that the government knows something about Fidel’s death and they dont like anyone in the Jubilee government to make the story short. They believe that businessman Paul Kobia  killed Fidel and is being protected by powerful people within government. They loathe the way the police treated Kobia, who according to them should be locked up in a small jail waiting for a mention of his murder case.

After getting these intelligence  news, the president and his deputy had to cancel their travel plans. President Uhuru decided to preside everything to Omamo who was badly heckled as opposed to her counterpart Charity Ngilu who tried to ignore people who  were chanting  ” Msaliti “.

There is no love lost between the Odinga’s and the Omamo’s since during the Moi regime, William Omamo, Raychelle’s father was used by Moi regime to oust Jaramogi Odinga from politics in Bondo.

It is being rumored that Omamo got instructions from Kimemia who told her to represent the president because she is from the region with hopes that she would be received well . This later turned out to be an embarrassing and terrible experience .