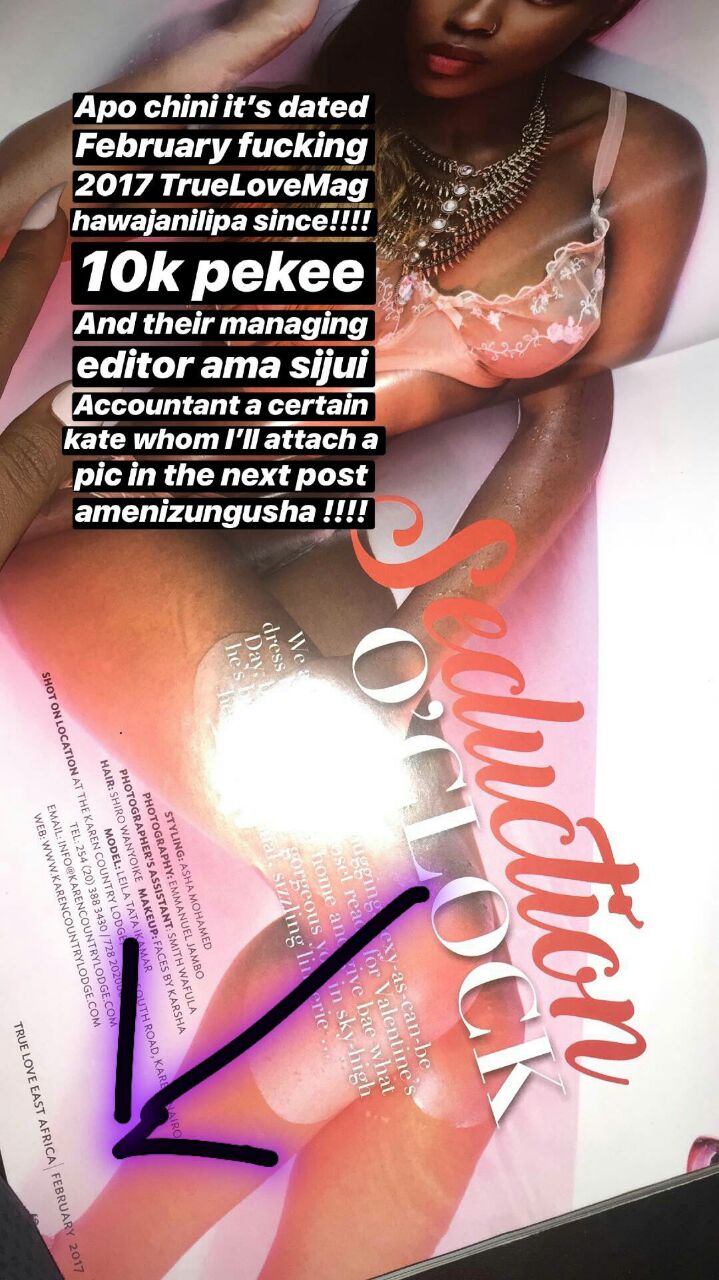 CAPTION: Lamentations of an exploited model, captured in this picture.

There exists a point of interaction between the Boy-Child’s clamour for societal change, and the #PayModelsKE , beyond the simplistic view of monetary recompense to victimised models.

For starters, it exposes the hypocrisy of the older, rabid-feminists who, despite knowing that the vice is rife, have steered clear largely because they passed through the same cycle, or are benefiting from the same.

For instance, most of these casting agencies and events outfits are owned by prominent women, who have morphed into cartels. The conflict of interest comes when the person awarding the job, also owns the service provider being engaged.

This exposes the sterile nature of Corporate Kenya, where cartels have undermined Kenya’s productivity and competitiveness on a global scale.

For instance, when a staffer at Scan-Group by the name of Brian Mbunde tweets that another blogger by the name of Xtian Dela has “bought” followers as a justification why his company doesn’t engage with him, exposes the rot in these marketing outfits.

For starters, if indeed someone can “buy” followers, wouldn’t we all be buying the same to grow our influence? And if in the unlikely event that somehow Bots were created to influence opinion, isn’t that a skill in itself? I mean, isn’t America now probing Russian influence in their elections by Russian Bots?

The thing that Brian Mbunde and his friends at Scan-Group should know is their job puts diverse restrictions on their freedom of expression, a thing that curbs their numbers and influence. A marketer cannot be an influencer.

Un-attached influencers who have no restriction, can wade into any subject matter, create all sorts of controversies and still emerge unscathed and with more following.

Cartels in companies like Scan-Group and its affiliates have incubated this disease of exploiting models and other service providers due to the lack of accountability.

What #PayModelsKE is doing is calling for responsibility and best-practice in corporate governance. And there are many examples out there, where we can draw lessons from.

In the global commodities market for instance, big buyers and traders like Nestlé, Starbucks, Danone, and the likes, have been forced to sign codes and certifications to conform with global ethics in matters relating to labour and environmental safety.

“Traceability” standards under labels like FairTrade, ensure that the companies will not buy any product where child labour has been used to product the coffee, or tea or cocoa.

It is disheartening to hear that blue-chip companies like ICEA Lion owned by the prominent Ndegwa Family, has been part of the cartels exploiting models. When we see top brands like True Love published by established names like Carol Mandi withholding payments to models, shows how dire the situation is.

When we see established media houses like Nation Media Group, Standard Group exploiting models as cover girls in their magazines, simply because they believe they’re offering “exposure” shows us how the big corporates have adopted cannibalistic policies in their management.

Corporates can no longer afford to shield themselves behind the “third parties” argument, where they blame their service providers for entrenching exploitation. They must play a role in ensuring that all goes right.

The time has come for Kenyans to demand accountability from rogue Corporates, who continue to entrench bad-practice through the cartels within their companies. That even after engaging 3rd parties to recruit models or influencers, they must be subject to continuous review, audits and assessments.

Giving for instance Scan-Group one “mega” contract which is reviewed annually is a failed experiment. Just like companies handle their own customer-care, so should they have functional departments, not just outsourcing everything.

That we have a generation of young people ready to agitate for their rights is commendable. Many others have been conditioned to remain silent in the face of adversity, and the net-effect of this has been continued oppression.

One person can change the world!