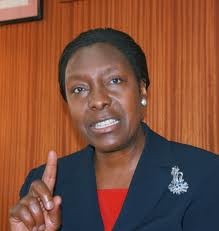 Put yourself in Ngilu’s shoes. Would you name a land grabber who for instance happens to be your boss ? Eh…Hard questions. The grabbing of Langata road primary school playground and lobbing of teargas at young children has generated  debate both locally and internationally.

One person is in the spotlight. Charity Ngilu. Why has she refused to name the Land Grabber ? You ask …..Because she lacks the moral courage and authority to do it . For those who do not know Charity Ngilu, here is her brief history as covered by a Kenyan political Blog . Read Keenly as you sip your cup of tea.

At the pinnacle of her influence as presidential candidate in 1997, Charity Kaluki Ngilu was fondly known as Masaa ni ya Mama. The nickname developed to Mama Rainbow in 2002 when she joined hands with then Opposition candidates Kijana Wamalwa and Mwai Kibaki to form the formidable Narc that wrenched power from Kanu.

Since then, the Water and Irrigation Minister has guided her Ministry through controversies that represent some of the most brazen violations of the law in recent times, typifying unbridled greed.

The Kitui Central MP for 20 years, Ngilu bagged the Health docket when the Narc Government took over in early 2003. But she soon made headlines when a conference held in Nairobi in 2004, ostensibly for people living with HIV/Aids, turned chaotic over misappropriation of funds, courtesy of Ngilu’s daughter who had been contracted to organise it. Hundreds of the participants were left stranded in Nairobi with no means of getting home.

Later, Ngilu appointed a tainted Dr Florence Musau as the director of Kenyatta National Hospital. Musau was eventually kicked out in 2009 over corruption allegations. But the Government paid her a total of Sh1.5 million for one year, even as it paid Dr John Kibosia, who had been appointed to act in her place.

Musau’s departure was hastened by investigations of the Efficiency Monitoring Unit that revealed she had been involved in irregularities involving a Sh224 million tender for the procurement of equipment for life support, the Intensive Care Unit and the High Dependency Units.

Even when the corruption allegations were referred to the now defunct Kenya Anti Corruption Agency for prosecution, Ngilu stood by the director, describing her performance at KNH as “exemplary”, and accused some unnamed enemies of undermining her at the ministry.

However, when Ngilu was later moved to her current job as Minister for Water and Irrigation, the trickle of controversies grew into a torrent. In 2007, reportedly she raided the Central Police Station and secured her activist friend Anne Njogu from lawful custody.

Later in September 2010, Ngilu and Trade Assistant Minister Wavinya Ndeti were at it again, storming Machakos Police Station to demand the release of 12 of her supporters who had been charged for invading a private property in Athi River.

Ngilu’s next moment of disgrace came in November 2011 after eight of her family members were sucked in yet another corruption scandal. Four companies linked to her close relatives and children were accused of minting millions of shillings after they supplied goods to Tanathi Water Board, which was under Ngilu’s ministry, at grossly exaggerated rates, and without competitive bidding.

One of the companies, Kat Michaels, where the minister’s second daughter Mwende Keteithia Mwendwa was a director, was awarded lucrative contracts.

The company, which was founded in May 2008, had been given a Sh1.8 million contract to supply polo t-shirts, caps, executive pens and carrier bags. The company was also paid Sh800,000 to supply “big diaries” sold to the Board at Sh2,500 each, while the “small” diaries fetched Sh1,500 each.

Enacting a similar script, another firm, Broad Visions Utilities Limited, was founded in April 2008. One of the company’s directors was Billy Indeche, husband to Ngilu’s first-born daughter, Jemi Mwendwa. They too got supply contracts.

Other kin of the minister have been involved. Ngotho Kasyoki Ithumbuti was a director of Timetrax Limited, where he served together with a cousin Patrice Mnene Munguti. This company won a tender to supply GI pipes at Sh23,815 per piece and ultimately supplied 65 pieces.

When the hour of reckoning came, eight people, among them the minister’s son in law, Indeche, and Tourism assistant minister Cecily Mbarire’s husband, Denis Apaa, were arraigned in court charged with a series of corruption offences.

The suspects were alleged to have defrauded the Ministry of Water and Irrigation of Sh26 million after violating the procurement procedures. Others who were charged included Lawrence Simitu, Isaiah Amwanzo Benjamin, Samuel Alouch Otieno, Robert Mati, Joseph Mucuku and Mwagambo Mwangombe.

Besides getting money through fraudulent means from the Government, Indeche and Apaa were accused of committing economic crimes by jointly conspiring to defraud the Water ministry by purporting to qualify for a tender to sink five boreholes in drought-stricken Machakos and Makueni districts at a time the residents were being by drought.

Apart from recording statements with anti-corruption agents, Ngilu had also to appear before the Parliament’s Committee on Equal Opportunities over allegations that she had violated the principle of equitable distribution of resources by favouring certain regions, especially her home area.

In the aftermath, Prime Minister Raila Odinga rallied Ngilu’s rescue, declaring that the fight against graft was now “getting personal.”

Ngilu enjoyed further reprieve after a parliamentary committee led by Mutava Musyimi cleared her of graft charges in April, 2011, and accused her assistant minister Mwangi Kiunjuri, who had blown the whistle on some of the scams, of “witchhunt.”

Mbarire mobilised enough support in Parliament to have KACC wound up, while Kiunjuri was transferred from the Water ministry.

Kenyans may never know what really happened at the Water ministry as the National Water and irrigation Corporation Nairobi offices were razed to the ground last September, eliminating any traces of evidence that would have consigned corrupt officials in jail, where they belong.

Now that is the person you expect to name a land-grabber. This is what she said earlier today

I believe there is a name behind a name.If the president continues to push me I will name and resign.