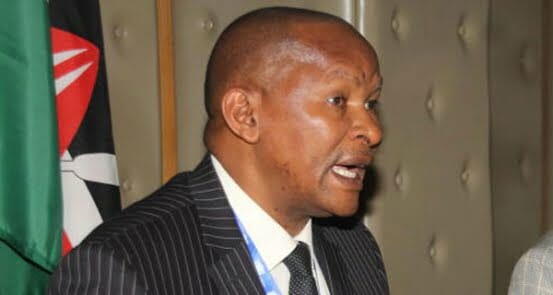 News that EACC fellas are being ejected out of integrity house is total bullshit and a useless seductive cry that cannot win the sympathy of any sane Kenyan.

Those blokes at the Integrity HQ have refused to deal with the corrupt citing challenges and refusing to step down for more serious people to deal with the corrupt .Just like NCIC that is filled with political rejects and old ancestors ,  EACC is a useless and bloated commission where fellas are seducing each other instead of doing what they are supposed to do **Snip **

What should we do now that they will be evicted ? Cry, smile or urge God to give them headquarters in heaven so that they can nail the corrupt ?

Mumo Matemu, together with his boys and girls have been harassing traffic officers, small fish who are an easy target so that Kenyans will see they are doing something . Bullshit!! These are cheap gimmicks that will fool idiots who do not know what is going on.

Even if Matemu and his team of clueless boys and girls get an office in heaven, they wont fight graft- They wont nail the big fish( Just making it Kenyan )

The commission itself should be dissolved to save poor Kenyans bucks. Just the other day I saw an article in the local  dailies inquiring why Matemu was dragging in the Shollei case. Infact ,  Our concerned media  ignored Mumo Matemu’s cry when he was under siege. First, Sam Shollei who happens to the the Standard group CEO called him and threatened to bring him down if he dared investigate his dear wife over corruption allegations. This call leaked online, Just Google and listen to it or Read it here

In short, Matemu is under siege with word doing the rounds that the way he got his job at EACC was questionable and  he lacks the moral courage to fight graft . At one time Bunge said this bloke has zero passion for the job but as usual, Kenyans laughed it off.

Way forward ? The Anti-corruption body is a toothless dog. We have many scandals they arent ready to deal with. We have the GDC scandal where poor Kenyans money has been squandered with fake steam production promises . We have the Angloleasing Scandal, we have the Sam shollei case, We have the Chicken scandal where Kenyans are demanding that Davis Chirchir and Isaac Hassan step down till they clear their names and we have the Swiss Secret Accounts Scandal  that have put the body’s incompetence  on the spotlight. By the way Matemu was begging the fellas to close down their accounts lest he interviews them ..WTF ?!

Well, I hope I wont be accused of disrespecting powerful people but I do value my freedom to give views and if anybody is opposed to that, I am ready to defend that right to death.