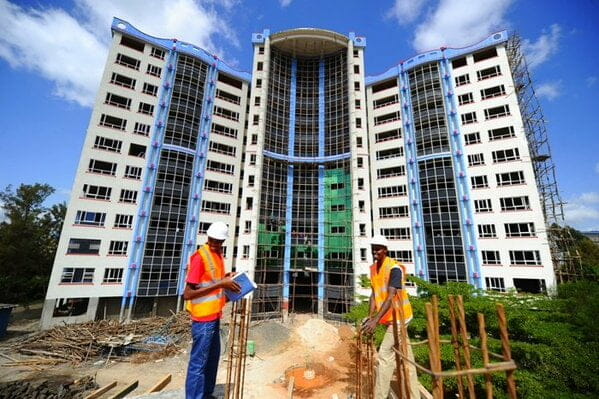 Mount Kenya has done it again, this time round it treated Kenyans to a spectacular ultra-modern administration block that is being set up in Thika main campus.
The 14-storey building is expected to be complete by May this year. Vice Chancellor Prof Stanley Waudo was seen in the Saturday Nation inspecting this building that has cost Sh600 million.
On Saturday, Kenyans took to Twitter to express their views about the expansion of the institution is a hashtag topic #MKUInfrastructure.
That Mount Kenya University continues to expand day in day out is a marveling phenomenon that has left tongues wagging.
The university Chairman and founder Dr Simon Gicharu has managed to penetrate the murky waters of investing in education in Kenya to build one of if not the greatest empires in the East and Central African region.
Efforts by competitors to pull his empire down has proved futile as the university keeps pulling new stunts and approach in its management style.
Indeed, Mount Kenya university became the first university in the whole world to employ more than 3,000 part time lecturers.
But our sources tell us Dr Gicharu has since slashed the number to 100 part timers as he seeks to get permanent and pensionable dons.
“He told a meeting that part timers do not give their best since they have other institutions to teach. He read the riot act last December hence slashing the number,” our source who is well versed with the ongoings at MKU told us.
Last year Dr Gicharu was inducted into the World Entrepreneur of the Year Hall of Fame.

He was among the 65 top business leaders from across the world who were feted during the World Entrepreneur of the Year ceremony held in Monaco, France.

The event, which is sponsored by Ernst & Young, recognises the accomplishments of entrepreneurs.

“He was picked for his contribution to education by creating a private university now with over 50,000 students and 4,000 employees, and also for its higher number of accredited academic programmes among private universities in the country. He is credited with transforming a training college that was operating at a loss and could hardly meet its rent obligations, into a leading private university in the region.” EY stated.