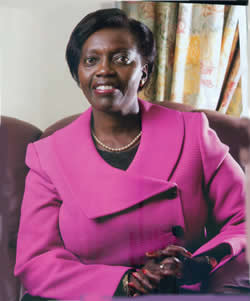 The Iron Lady AKA Martha Karua was the first to Tweet condemning her Sacking and observing that the law had not been followed . Why is Martha Karua Supporting Grace Kaindi ?

Even after fighting for Kibaki after the 2007 elections , Martha Karua  finaly resigned as the Minister for Justice, National Cohesion and Constitutional Affairs. She finally walked out of  Kibaki’s confusion government .

She equated her ministrial duties to giving somebody the mandate to dig a farm, giving him/her a jembe/hoe but tying his/her hands behind the back.

She reiterated that she need not have a ministerial position to bring reforms to Kenya. She stated that  anti-reform forces in the office of the president and in the government could not let her perform her duties .

She expressed her frustrations with these forces as she sought to bring judicial reforms with the height of the arrogance being the latest appointment of judges by Kibaki without consultation with stakeholders. Basically the appointment of these Judges angered her and she had to resign .

Karua has been Tweeting in support of Grace Kaindi because she understands the pain. She knows how the Kenyan Presidency can bend the law to fit their Whim .

According to Ms Karua, matters of appointment are exclusively handled by National Police Commission which recruits and makes such changes.