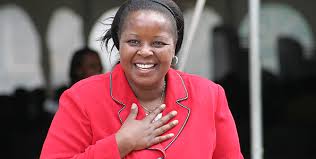 The stakes are high and the gloves are off as supremacy battles to control The National Alliance party in Nairobi ahead of the 2017 general election gains momentum.
Longtime archrivals Starehe MP Maina Kamanda and his predecessor Bishop Margaret Wanjiru are currently embroiled in a fight to control city politics over the chairmanship’s slot. According to party sources, Kamanda is the acting branch chairman while Wanjiru separately claims she is the branch party chairperson.
Wanjiru’s political career now hangs in the balance following last week’s announcement by Nairobi MPs that she has been indefinitely suspended for allegedly trying to take over the branch leadership through unorthodox means.
The suspension is likely to rekindle the political rivalry between Wanjiru and Kamanda who sources say has no time for Wanjiru and was totally opposed to her decamping from ODM to TNA saying it did not add any value to the party and Uhuru Kenyatta.
Wanjiru who has declared that she will fly the Jubilee flag for the Nairobi gubernatorial race has been isolated by the Nairobi TNA MPs who have been holding strategic meetings and which eventually endorsed the Dagoretti South MP Dennis Waweru as the party’s sole candidate for the seat.
The endorsement has rattled Wanjiru who decamped from ODM after she realised that there was no way he was going to defeat Governor Evans Kidero in the ODM primaries. Analysts say Kidero is the only ODM elected Nairobi leader who is assured of defending his seat since he does not have a strong opponent from within ODM.
It is against such fears that Wanjiru, after consultations with her supporters, ditched Raila Odinga and announced her support for Uhuru, a move that city TNA politicians did not welcome and approve.
Back to the TNA coup, Kamanda has come out spitting fire and warning Wanjiru of unspecified political consequences if she does not stop her underground political maneuvers.
Kamanda wants Wanjiru to respect the existing party officials and stop imposing herself as the branch chairperson. The city leaders were categorical that TNA members will not allow newcomers to wreck the party from within.
During a meeting held at party headquarters, Nairobi branch officials warned that TNA was like their home, which they have invested in and that they will not accept a person who was against the party up to last year to purport now to be an official of the party.
“I will not let Wanjiru to unprocedurally declare herself the TNA Nairobi party boss when I know she campaigned against President Uhuru Kenyatta,” said Kamanda.
According to Wanjiru, she was elected the Nairobi TNA chairperson by the Nairobi executive delegates who represent the 17 constituencies in Nairobi and emerged victorious against two other candidates. The alleged elections were held in July 2015.
There have been claims that Wanjiru has poured money to buy off TNA Nairobi county officials to support her for the party’s leadership.
Analysts say the battle for the TNA ticket will be do-or-die between Wanjiru and Waweru. Already, TNA strategists have identified Waweru who is also the chairman of the revived Gikuyu, Embu, Meru Association.
The endorsement has complicated matters for the Nairobi Senator Mike Sonko who had also declared interest for the same seat. Reports say he is likely to relocate to his native home of Machakos county.
His intention to shift his base to Machakos county has sent shivers down the spined of both Governor Alfred Mutua and Senator Johnson Muthama camps. The fear amongst the two rivals is that considering Sonko’s flamboyance and his style of politics, he might render them irrelevant he decamps to Machakos county where Muthama and Mutua are fighting for political supremacy.