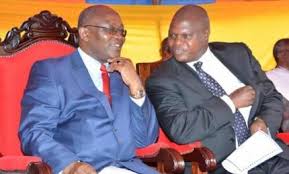 Kisii county ODM branch executive committee is contemplating kicking out their secretary Joash Maangi for allegedly for showing the branch membership disrespect and failing to abide by the laid down rules, deputy majority leader in the county assembly Shem Ondara has said.
Ondara said that Maangi who is the deputy governor is undermining Governor James Ongwae at the expense of development and prosperity.
“We will soon kick him out so that he can join a political party of his choice and replace him with a better person who can work with all party members,” said Ondara, adding that the deputy governor has lost political direction and is headed to the doldrums.
Ondara cited the recent incident at Ogembo town which is the headquarters of the old Gucha region where hired hooligans burnt the governor’s effigy.
Ondara said the incident occurred in his ward which has benefitted a lot from the county government and called on the perpetrators who sponsored the youths to exhibit leadership of decorum befitting their status and standing in society, adding that their image in society should not be tainted.