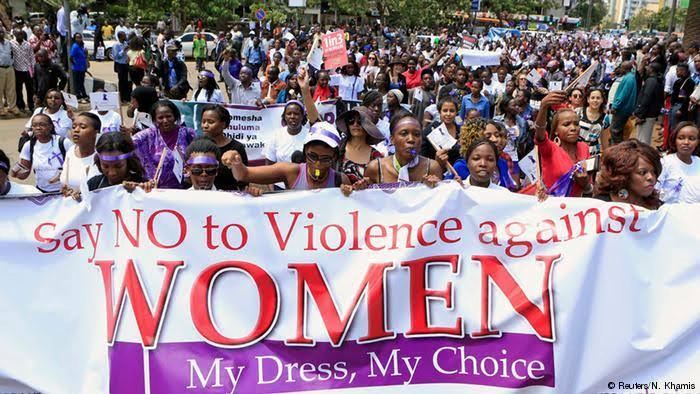 CAPTION: Kenyan women during the “My Dress My Choice” walk. Never have Kenyan women championed for the legalization of prostitution because they want the price of pussy to remain exaggerated so that they can continue exploiting men.

Just as it always has, the buck will always stop with men. Women will say they want equal rights, and do the same stuff as men….until the couch has to be moved, the bill has to be paid, or a war has to be fought….then the woman card gets played.

Just as it always has, the buck will always stop with men. Women will say they want equal rights, and do the same stuff as men….until the couch has to be moved, the bill has to be paid, or a war has to be fought….then the woman card gets played.

In light of Akothee’s nauseating public display of infamy and disgusting poses which should be executed by beings of better and preferably younger body features, one missing talking point amidst all the hullabaloo is prostitution and if it should be legalized or not.

We have seen women’s groups, feminists, moronic pieces of shit like Anita Mogere and obese idlers like Millicent Omanga championing for every other right for Kenyan women under the sun, except the legalization of prostitution. It’s conveniently brushed under the carpet, despite us knowing that it’s taking place, mostly disguised in various forms. 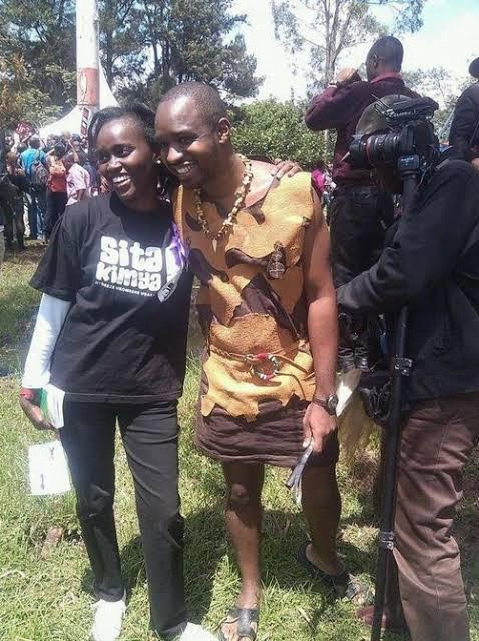 CAPTION: Female apologist Boniface Mwangi who hypes the liberal agenda so as to get donor funding from gay rights groups and MeToo organization, pictured here dressed as a woman. Never has he ever championed for the legalization of prostitution.

Prostitution is a commodification of the sexual marketplace. While women are all too happy to exchange sex for money in various modalities it shifts other women out of the market. I should add that those ‘modalities’ include everything from marriage to Instagram ‘modeling’ to ‘sponsorship’’ to open prostitution.This challenges women’s collectivist power base by introducing capitalist competition to the market. Women don’t want that.

Men are attracted to women by either beauty, physical appearance or both. Many women don’t fit this criteria and thus they stand to be locked out of the sexual market should such a law pass. Ugly women still want the chance to compete with young, hot campus bitches. Anne Waiguru wants to confuse some retarded lawyer to marry her at age 50. He has been duped to love her because of her “intellectually stimulating conversations” as if that is what the male primal instinct requires to survive.

Basically women like Amber Ray don’t like others charging Kshs. 1,000 bob an hour when they want it to cost WAY more. For instance men who’ve approached Amber Ray on her DM’s says she asks for Kshs. 50,000 an hour (dinner and drinks exclusive) for a lousy lay and a fake orgasm.

Most females in Kenya will not support prostitution, especially the prominent ones. They need men to be desperate so they can exploit them with the possibility of sex. Prostitution will drive down the cost of sex. If men can get sex easily, they’ll be harder to manipulate and won’t pay more than market value.

Men are driven into this state of “pussy despair” by the principle of scarcity-mentality. You don’t need to take your side-bitch to Santorini Greece just for a lousy shag. Why not fly yourself there and go find some real sexual experience with the plethora of multicultural prostitutes in that country? Why limit yourself and in the process get financially exploited?

Most weak men like Syd who took his side-bitch to Santorini, have never experienced sex in anything but a transactional context. The cost of the flight plus expenses was the value she has pegged on her vagina. He just obliged into acquiring a widely available product, at an inflated price. When a woman has validational sex with an Alpha male, she’s enthusiastic and the dynamic is natural. She even thanks him for the breeding opportunity.

Never be afraid of losing a girl. If you’re doing your job, you have other girls. Scarcity mentality is crippling to men. Call her bluff. If she wants to fuck you, she’ll find a way to fuck you. In other words, in order to keep a girl, you have to be prepared to lose her. The one holding all the power is the one willing to walk away first. Women do not respect weak men.

There is no greater demonstration of higher value than a man who dumps a woman. Why? Because women are accustomed to being the primary sexual selectors. When you remove this, when you flip the script, it instills doubt in women’s egos.

You know why women get all gooey when a guy is a good cook? Because they learned Strong Independent Women® “Never to do ANYTHING for the expressed pleasure of a man” by feminism. As a result, most women believe cooking for a man is beneath them.

Women of the past 3-4 generations have been taught that ‘independence’ means never doing things for a man. Cooking, laundry, cleaning, any kind of service really, is beneath them. Consequently sex is their only real value to men because they add nothing else.

The Brian Mbunde-type female appeasing guys think that being a good cook is ‘value added’ to their weak Game. It’s part of the “getting in touch with your feminine side” they think is imperative for a good relationship. But they ignore the reasons of why women refuse to cook or bother with learning how. 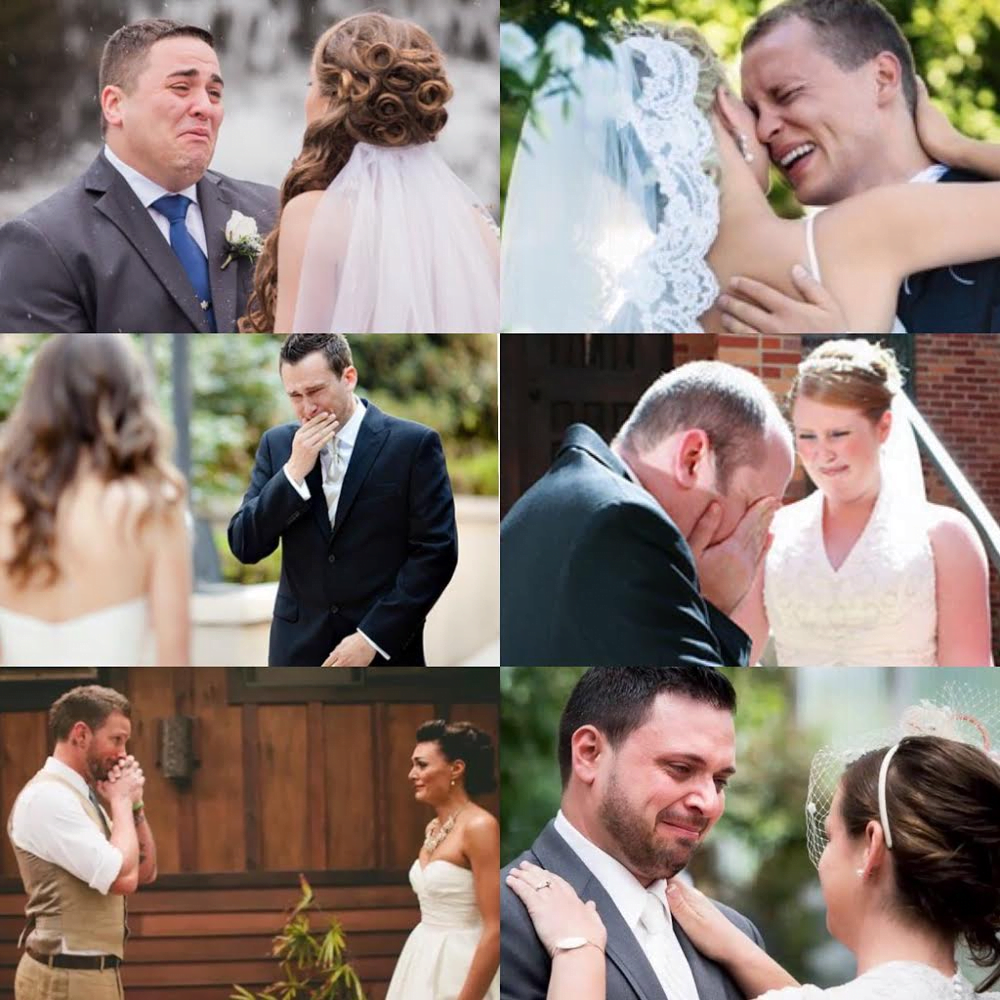 Pussy Nigger’s: These are the female apologists and apeasers like Brian Mbunde, who are constantly pandering to the feminine imperative so as to appeal to the female dollar.

You shall make your mission, not your woman, your priority

Forget all those romantic cliches of the leading man proclaiming his undying love for the woman who completes him. Despite whatever protestations to the contrary, women do not want to be “The One” or the center of a man’s existence. They in fact want to subordinate themselves to a worthy man’s life purpose, to help him achieve that purpose with their feminine support, and to follow the path he lays out. You must respect a woman’s integrity and not lie to her that she is “your everything”. She is not your everything, and if she is, she will soon not be anymore.

Here below is a video of Megan Good and her pastor/motivational-speaker husband. It’s the most depressing shit you will watch this week, as it most probably reflects on your lives and how you put pussy on a pedestal. Nah fam.

Look at her facial expressions. Even her, she knows this dude is full of crap. And if he doesn’t have money, she will be first to leave and go look for an alpha-cock. While he is preaching on finding the right woman, he should also focus on her facial and body expressions. But, even if he did, he doesn’t have a clue. So, very sad.

There’s a very nauseating and deeply disgusting couple on Instagram called Kabi wa Jesus. They’re the Githeri version of Megan Good’s video. Someone should look for them and shoot them (not in any way promoting violence) but I mean shoot them off social media. Oh dear, I’ve never seen a pathetic dude like him.
Would you like to get published on this Popular Blog? You can now email Cyprian Nyakundi any breaking news, Exposes, story ideas, human interest articles or interesting videos on: [email protected] Videos and pictures can be sent to +254 710 280 973 on WhatsApp, Signal and Telegram.