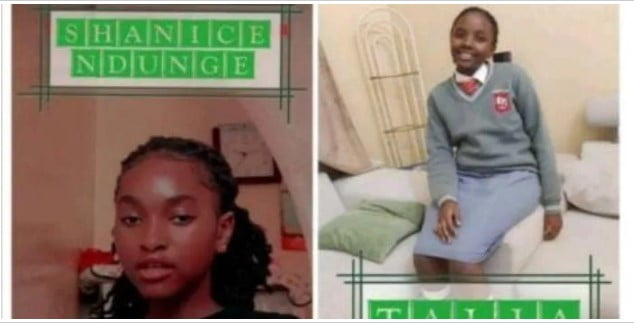 CAPTION: A poster with contact details of Sharon Ndunge’s family. She is one of the girls who went missing

Through the thread of posts shared on Twitter, they revealed that following preliminary investigations into the incident, detectives established that the girls had been lured out of their homes through a social media account identified at “Carty-gang-ent.”

The said cartel is said to have been using internationally-registered telephone numbers, although they operate from Nairobi.

Detectives were prompted to look into the event following complaints from a number of worried parents from various Nairobi estates that their daughters had gone missing for days.

Their missing person case went viral after their plight was highlighted by Fiona Otieno, one of the missing girl’s cousin.

Three of the girls were traced by detectives from the Child Protection Unit based at the Directorate of Criminal Investigations (DCI) while four others are said to have gone back to their homes in Komarock and Kamulu after the three showed up at Central Police Station in Nairobi.

The three girls told police that they were at a friend’s house, who is aged 21 years old.

Upon their return, the girls disclosed that they were bored at home having stayed indoors since the Covid-19 outbreak in March.

“When asked where she was, she said she just needed to get away,” a relative of one of the girls told journalists at the station.

Interestingly, however, detectives found it interesting is that the teenagers seemed to have had a “good time” all through as was captured on an Instagram page where they posted their daily pictures.

The page has since been deleted.

While being interrogated by detectives attached to DCI’s Anti-Human Trafficking and Child Protection Unit and the Crime Research and Intelligence Bureau, the young girls revealed how they were lured from their home and linked up in partying joints in Nairobi.

As at now, information on who exactly Carty-gang-ent are is rather scanty but a quick search into the internet portrays the alleged gang as some sort of an upcoming underground musical group based in Nairobi.

From their YouTube page, it’s clear the group only have a modest following with only two of their songs named “Zoza” and “Bloody Bloody” hitting the 1,000 (1K) views mark.

The rest of their work, like “Suicidal” and “F*ck The Snitch”, tell all you need to know on the style of music they produce.

Detectives are now said to be hunting down members of the alleged cartel, with some of the members expected to be arrested and interrogated soon.

“All of them will be interrogated to establish where they were and with who,” DCI boss George Kinoti said, “we are also seeking to know more about the gang involved,” he added.

In a message to Kenyan parents attached at the bottom of the mid-morning brief, detectives warned that children’s activities at home and on social media networks should be keenly taken note of.

Additionally, the sleuths also issued a stern warning addressed to individuals taking advantage of the current pandemic to prey on school girls who are at home, noting that their days are numbered.

Just recently, detectives arrested a man who posed as a wealthy businessman willing to sponsor young girls to holiday destinations of their choice.

He would then lure them to hotels and eventually in lodgings where most reported losing their belongings as the ‘businessman’ disappeared.

They believe this latest incident is linked to such tricks.

In this article:Carty Gang, DCI Kenya