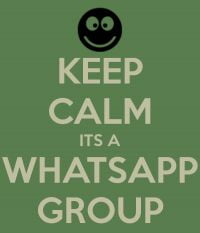 Yes you heard it men, it’s time to grow the fuck up! You’ve recently acquired some female traits where you become a bunch of grumpy old fucks, who get easily irritated by dissenting views or opinions. Your societal conditioning and confirmation-bias has been tailored to only absorb what you see fit, through your lenses of ignorance and intolerance.

Men, who are supposed to be the bedrock of society, have started behaving like children in WhatsApp groups, throwing tantrums, or “lefting” when they’re incapable of driving their points home. What will society be when men acquire female traits?

I mean, we are used to women catching feelings, or letting stupid side-shows cloud their overall judgement. Women are renowned for making bad decisions. So we cannot have an entire generation of men rotting away at the hands of the feminine imperative.

For instance, many of us are spending less time on Facebook because we allowed our parents, uncles and older people like pastors, bishops, etc to befriend us on Facebook. Many people have since stopped expressing their views on Facebook, and are reduced to just posting EPL scores.

In our own social-groupings, men have been accustomed to toe the line. They have to concur with the opinions of the guy buying alcoholic (in a bar setting) or the loudest guy, or the guy in senior positions, or the religious guys spewing their usual trash.

WhatApp Groups however present a unique platform for interaction, where brains distinguish themselves from brawn. You cannot fight to be heard, or shout, or buy people alcohol. Nobody cares about your age or achievements. It is a conveyor-belt of opinions.

So those who believe they should be the ones controlling discourse just because everyone listens to their bullshit in the local pub, have had a difficult time adjusting to the world of free speech. They’re the ones who keep asking the Admin to send a warning to a certain member, and the likes.

You cannot turn and be like feminists who are so intolerant to dissenting views. Feminists in Kenya are the ones who block people who don’t kiss their asses. Feminine privilege from an early age in school where they’d report a boy who was smarter than them to the teacher and have their way, is prevalent.

When women are unable to expend more intellect at a subject, they resort to “ni hayo tu” which more or less means “end of thinking capacity” .

Men are now “lefting” groups like little bitches, when confronted with painful realities. Grow the fuck up you pieces of shit! Diversity in opinion is healthy. It’s a sign of a functional democracy.

So grow a pair my nigga’s. If you’re the one who calls the shots in your clique, if you’re the one who buys alcohol in the local so that people can buy your thinking, my friend you’re living in the past. Deal with your own emotions first, because whatsapp groups weren’t created to baby-sit your weak emotions.