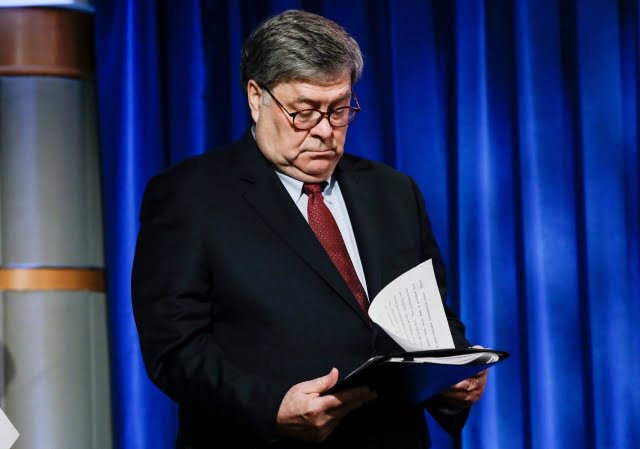 US Attorney General William Barr checks his notes as he arrives for a joint news conference on the International Criminal Court, at the State Department in Washington, DC, on June 11, 2020. – The US on Thursday accused Russia of “manipulating” the International Criminal Court as President Donald Trump announced sanctions against court officials who target US troops. “Foreign powers like Russia are also manipulating the ICC in pursuit of their own agenda,” Barr said. (Photo by Yuri Gripas / POOL / AFP) (Photo by YURI GRIPAS/POOL/AFP via Getty Images)

The Justice Department has released its proposal to roll back legal protections provided to internet platforms under Section 230 of the Communications Decency Act. Though largely aimed at platforms like Twitter and Facebook, which have drawn the ire of Donald Trump, the rules would also apply to smaller companies, Endagnet reports

The proposal calls for a number of changes to Section 230, the 1996 law that protects tech companies from being legally liable for what their users say on their platforms. While some lawmakers have said Section 230 should be repealed entirely, the DoJ says it’s aiming for “productive middle ground” between repeal and doing nothing. Somewhat bizarrely, though, that “middle ground” calls for both more and less content moderation.

One set of changes — in the “more moderation” bucket — is “aimed at incentivizing platforms to address the growing amount of illicit content online,” and would limit legal protections in cases of terrorism, child exploitation and cyber-stalking. At the same time, the DoJ calls for less moderation of other types of content. Because the proposed rules would also limit companies’ ability to moderate content that doesn’t break the law. It says the current language of Section 230, which allows companies to remove content that is “objectionable,” should be replaced with “unlawful” and “promotes terrorism.”

“This reform would focus the broad blanket immunity for content moderation decisions on the core objective of Section 230 — to reduce online content harmful to children — while limiting a platform’s ability to remove content arbitrarily or in ways inconsistent with its terms or service simply by deeming it ‘objectionable,’” the recommendations say.

The rules could also have major implications for companies’ use of encryption, which Attorney General Bill Barr has repeatedly targeted. As The Washington Post notes, the proposal “raises the possibility that tech companies could lose their legal protections if their security practices, including their use of end-to-end encryption, hamstring law enforcement.”

Importantly, the DoJ proposal is just that: a proposal. Until Congress opts to adopt any of these changes the document amounts to little more than a “8,000-word wish list” as ArsTechnica called it.

Unsurprisingly, tech companies have been opposed to efforts to roll back Section 230 protections. Facebook sharply criticized Trump’s executive order on the subject, saying it would restrict speech. On Wednesday, the company’s top policy official, Nick Clegg, repeated those warnings.

“Our ability to moderate content in that way and moderate other forms of content is enabled by the provisions of Section 230 and changing significantly, or eliminating, the balance of responsibilities and provisions about liability in Section 230 would, in our view, in the end mean less speech of all kinds appearing online,” he said during a call with reporters.

The DOJ’s proposal comes as Democrats and Republicans alike have called for Section 230 to be changed or repealed, though both groups have different motivations. Joe Biden has called for its repeal, citing Facebook’s unwillingness to take action against Donald Trump. And Republican Sen. Josh Hawley, who has criticized Facebook for censorship, has also introduced legislation that would allow users to sue companies that “selectively” enforce content policies.