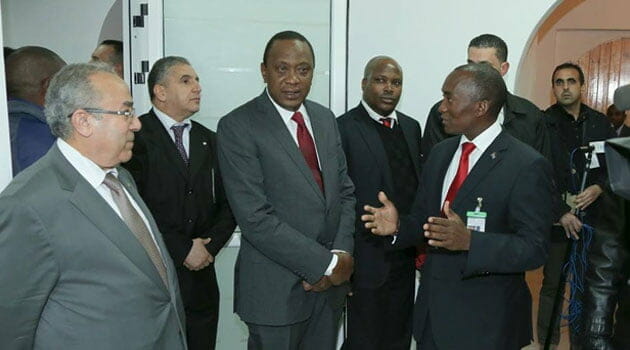 “We discussed many areas of cooperation including dealing with security threats our countries are facing. Algeria is facing security challenges emanating from Libya and Mali while Kenya is experiencing a similar situation from unstable Somalia and South Sudan,” the President said.

President Kenyatta spoke on Wednesday evening in Algiers during a meeting with his host, President Abdelaziz Bouteflika on the second day of his State visit to Algeria.

President Kenyatta emphasised that trade was the key driver of economic growth and poverty alleviation in Africa.

He said Kenya and Algeria has agreed to accelerate the creation of mechanisms for exchanging trade information and promotion for the two countries to realize their full trading potentials.

“We also discussed how we can cooperate in areas of oil and gas given the Algeria’s experience in this field,” President Kenyatta said.

“We can cooperate more in that sector and also in the sector of renewable energy as well as the environmental matters.”

He said the two governments will set up mechanisms to ensure business communities from the two countries are brought together as channels for boosting investments and trade.

“Our governments will work much closer to set up a joint commission for cooperation between our two countries. We will be meeting at ministerial and other levels to compare notes and ensure that the discussions bear fruit,” President Kenyatta said.

At a separate event, President Kenyatta officially opened the Kenyan Embassy in Algiers, making Kenya the first East African nation to have a diplomatic mission in Algeria.

Addressing East African citizens including students in Algeria who witnessed the opening ceremony, President Kenyatta said during his talks with the Algerian leadership they agreed on the need for Kenya and Algeria to consolidate their partnership in promoting peace and prosperity across the continent.

He said people to people contact is what forms the basis of prosperity in any nation, adding that the opening of the Kenyan Embassy in Algeria will help achieve that agenda.

“True partnership will be amongst you, your fellow students, the business people who will come from Algeria to East Africa and vice versa to improve on trade and investments amongst ourselves,” he said.

President Kenyatta underscored the importance of enhancing connectivity and enabling a freer flow of goods and people between the two countries by commencing direct flights between Nairobi and Algiers.

“It is totally ridiculous that Africans have to travel to Europe in order to visit another African country,” the President said.

The Head of State pointed out that his host has made it clear that the two countries need to seek ways of dealing with barriers that hinder movement of goods and the people within the continent.

Present during the opening of the Kenyan Embassy were the Algerian Foreign Minister Ramtane Lamamra and his Energy counterpart Youcef Yousfi.