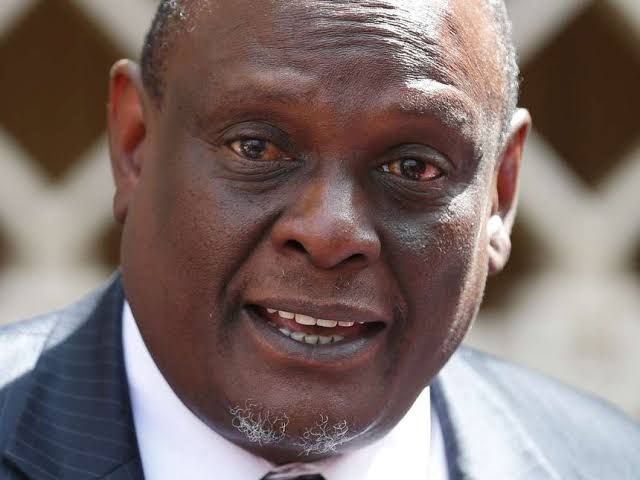 CAPTION: Jubilee Party Vice Chairman David Murathe: He speaks bluntly, sometimes to a point of rudeness, but with such disarming charm that even when he is telling off his political enemies, he doesn’t come across as hostile

Speaking on Monday, the ex-politician who prides in being one of President Uhuru Kenyatta’s top recognized strongmen made it clear that he and the rest of the party’s hierarchy will ensure that Senator Johnstone Sakaja, alongside his patrons Kipchumba Murkomen and Anwar Oloitiptip, faces the full wrath of Jubilee’s disciplinary machinery for conspiring under the “One Kenya Movement” emblem to shoot down the Senate Finance and Budgets Committee report.

While speaking to a local daily, a ruthless Murathe insisted that the legislators will only have themselves to blame for the dire consequences coming their way.

“We will deal with the senators for going against the party position. They will have themselves to blame for their parochial decisions. We will kick them out of the party. Read our party constitution, it gives room to deal with them,” he thundered.

According to Murathe, despite acting in their full rights to either accept or reject the proposed formula, he felt that Sakaja, Oloitiptip and Murkomen only maliciously opposed it without any tangible objections unlike other Jubilee senators from the affected counties who voiced sensible grievances.

“How would you explain why the three went against the formula yet their counties had benefited? It is cheap politics and we will let them out so that they can go politic freely,” he threatened.

Yesterday, Sakaja woke up to banners displayed in strategic places branding him a traitor. On Twitter, a betrayal hashtag carrying his name was trending. The senator, however, played it down, asking his followers to help “the keyboard warriors to earn their bread.”

In their defence, Sakaja, Murkomen and the group of seven senators from the counties that were gaining in the formula arrangement to yet opposed the vote claimed they were doing so in solidarity with the devolved units that were losing.

“I challenge State House to apply the formula they are pushing in the Senate to distribute the national government budget for the next two years. If they do so the marginalised areas will start feeling the impact of the national government,” Murkomen posted on his social media pages moments after the vote was concluded.

Additionally, Murkomen has disapproved Murathe’s remarks that they went against the party’s position, arguing that there wasn’t any existing understanding among members, further dismissing the former Gatanga parliamentary hopeful as a “poor negotiator”.

Murathe has also told off Northern Kenya leaders for always complaining about the reduced cash allocated to their counties when they don’t actually audit how the cash is spent, noting that most of the billions often end up back in Nairobi, buying property in various posh estates.

“They have pushed up the property market in Nairobi with the stolen cash,” he claimed.

On its part, Raila Odinga’s Orange Democratic Movement (ODM Party) through its chairman John Mbadi distanced itself from the failure by the Senate to pass the third basis for revenue-sharing formula, saying that the passage of the formula is each senator’s individual responsibility and pigeon-holing the party and its leader is political mischief.

“Garissa Senator Yusuf Haji who is Uhuru’s friend and leading the BBI is voting against the position of the majority. How come no one is looking at that?” Mbadi asked.

This came after a scathing attack by several Coast MPs who accused Raila of failing to rally his troops to reject the contentious formula.

Yesterday, Raila, who had a meeting with Murathe on Sunday, asked the senators to revert to the CRA recommendation and pass it as is if they fail to agree on the formula by the Finance Committee.