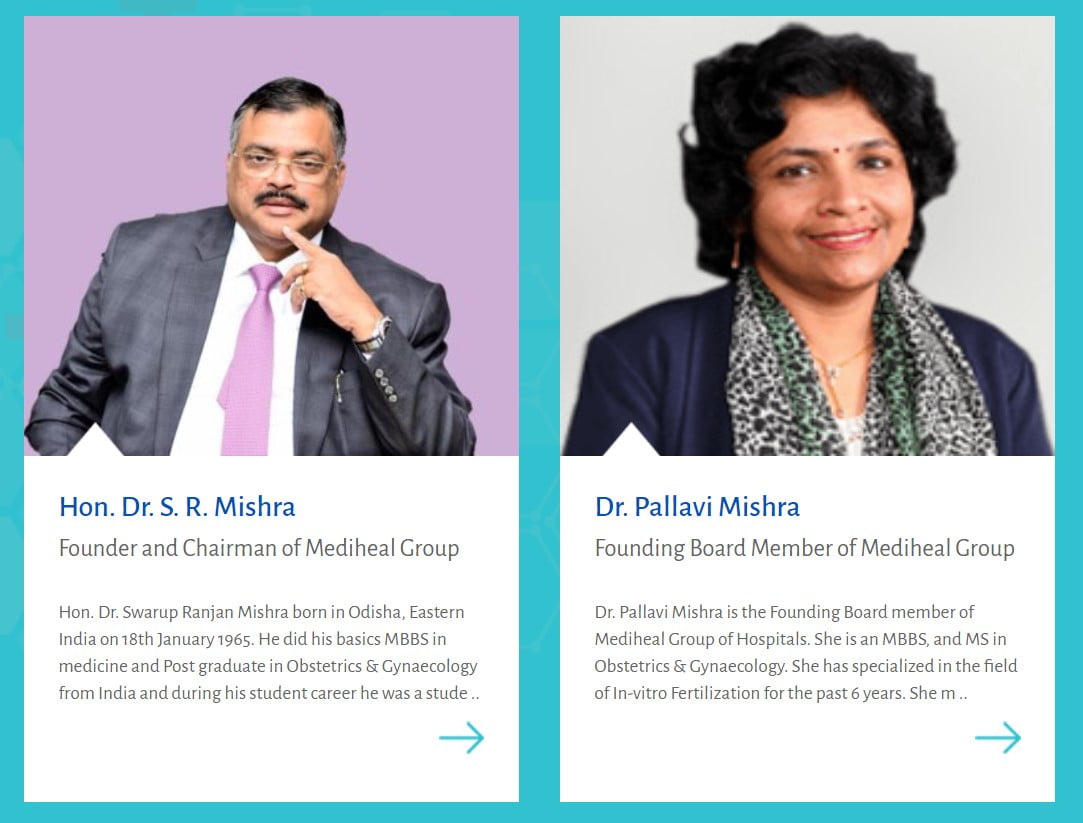 CAPTION: Founder and Chairman of Mediheal Group Dr. S. R. Mishra alongside the hospital’s Founding Board Member Dr. Pallavi Mishra: A nearly-depressed nurse from their Nairobi Eastleigh Branch has cried out that practitioners at the facility have gone unpaid for over two months

Just like everywhere else in the world, a significant majority of Kenya’s middle working class have been victim to heavy financial setbacks brought forth by the deadly Coronavirus pandemic which wreaked havoc heading into the second quarter of 2020 and spun the entire year upside down.

Since Kenya’s first case was reported on 12th March 2020, it is estimated that at least one million Kenyans have lost their jobs or been put on indefinite unpaid leave.

To briefly get more specific for the value of context, a recent TIFA Research showed that up to forty per cent of Kenyans living in Nairobi’s low-income areas witnessed either heavy deductions or a complete loss of income due to job loss since Mid-March.

This has left President Uhuru Kenyatta’s administration with the burden of solving one of the country’s worst employment crises in recent history with thousands of ‘nation-builders’ staring at the scary possibility of being unable to make a wage to meet even their most basic living expenses.

Among those struggling to make it through the rough times is Nurse Peter (not his real name) ― a qualified practitioner serving at Mediheal Hospital in Eastleigh ― who anonymously reached out via e-mail and laid bare his heart to this site’s Chief Editor, narrating the plight he and his colleagues at the health facility have been put under by their insensitive employer since the outbreak of the Chinese virus.

The care provider who openly confessed to being desperate and in distress began by revealing that since May, Mediheal Hospital slashed their salaries to half but maintained their full working hours.

With hardly any other employment opportunities out there, they harmoniously agreed to the new terms and kept dedicating their time to serving and managing the many daily patients (including those infected by COVID-19).

The situation, however, took a drastic turn when a few days of salary delays turned into weeks and now months as they continue to await their unpaid May, June and July dues.

Peter, who has now defaulted the last two months’ rent further expressed that he expected better given that the entire faculty has been selflessly working round the clock and promptly attending to patients at all times without complaint.

To make matters worse, employees of Asian origin whom Peter confessed to earning more than their black counterparts (despite sharing same positions) have been enjoying their slashed salaries in full on top of free accommodation which they are exclusively offered by Mediheal Hospital.

I am a Kenyan who is desperate, in distress and a depressed.

I am a NURSE by profession,

I work at Mediheal Hosp in Eastleigh.

I want to highlight a few things that are not being done right here.

1) Last month bt one they introduced a half salary effective May, as of today, We have not been paid for two months, despite working fulltime, round the clock, managing patients with COVID, others without.

2) I am a Healthcare provider, I have not paid rent for two months, no salary, its end of July now. still no salary for last month. yet we have always had patients in the hospital at all times.

Man we have people who depend on us, we have bills to pay, some of us have already been kicked out of our houses.

The Indian nurses who work here, are paid more(and its okey am not complaining) and they are housed by the hospital so they don’t go through the hustle that we go through.

Man, kindly come through for us.

I am giving in.

I can’t take it anymore !

Since the disease broke out, it was not until the government put in place precautionary measures including a curfew and lockdown (the latter having being lifted) that people began feeling fully its effects both economically and socially.

According to Psychology experts, these measures coupled up with the loss of employment due to the depressed economy and the stigma surrounding Coronavirus might have in turn led to the surge in mental related illnesses including depression, feelings of confusion, anger, fear, and even substance abuse.

From the weight of Peter’s words, it is clear why he holds so much anger and frustration.

During the Coronavirus pandemic, frontline nurses have faced enormous mental health challenges, and with such information and statistics out there in public, one would expect respected institutions like the Dr S. R. Mishra-led Mediheal Hospital to have some compassion for their dedicated workers who have boldly braved among other things; hefty salary cuts and the risk of infecting the deadly virus in the process of handling the ever-increasing cases.

The Mediheal Group of Hospitals is a recognizable healthcare service provider within East Africa which was started over 14 years ago in Kenya and now boasts of branches in over 10 locations.

As things stand, Peter and the rest of the nurses at Mediheal Hospital can only hope that someone answers their call for help and saves them from eviction and/or if the situation goes unaddressed, possible starvation.

The team at cnyakundi.com shall be closely following this incident so be sure to check back for subsequent independent updates.

Would you like to get published on this Popular Blog? You can now email Cyprian Nyakundi any breaking news, Exposes, story ideas, human interest articles or interesting videos on: [email protected]. Videos and pictures can be sent to +254 710 280 973 on WhatsApp, Signal and Telegram.