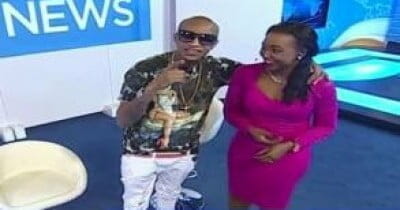 Pictured: Betty Kyalo and Prezzo. That both could have sex says more about Betty than Prezzo. Shows that don’t judge any woman by face-value.

It’s a pity to read all the bad news regarding the imminent divorce of media personalities Betty Kyalo and Dennis Okari. Using her soft voice and good looks, Kyalo was able to mesmerise Kenyans into falling for her script of Miss Goody Two-Shoes, yet she has been a psycopath with hoe-riffic tendencies from the onset.

These are the basic traits of a hoe and a psycopath. They first pretend to be unimpressed by gestures from men who society may have dismissed as sexual street-urchins, but deep within are turned on by the very same trait that would ordinarily repulse normal well-raised women.

Reports reaching the Cyprian Nyakundi newsdesk indicates that Prezzo worked with his mother as a tag-team on pursuing Kyalo. Immediately after the disgraced interview where an intoxicated Prezzo made a fool of himself on live television, his mother telephoned the KTN anchor to “apologise” for her son’s ridiculous behaviour on air.

Indeed, Kyalo tweeted that Prezzo’s mum had contacted her and apologised on his behalf, and a meeting was allegedly set-up to clear the air between the two by the sly mother, owner of Makini Herbs and Clinics. Being a dumb bimbo, and excited by simple overtures, Miss Kyalo accepted to meet Prezzo for a formal apology, setting the stage for one of the most high-profile divorces in recent times.

Reports indicate that beyond the texting, Betty Kyalo has visited Prezzo’s apartment located along Statehouse road, and indulged the suspiciously thin-looking singer in some behind the scenes pleasures that we may not be able to elaborate on this sober platform.

The brown stuff hit the fan after Dennis Okari, an investigative reporter discovered raunchy text messages between the anchor and overrated but underwhelming singer, prompting a physical confrontation with Betty claiming that he hit her. But remember that psycopaths do things that test your patience and resolve and always push you to the limit of your self-control, which is also the reason why Lillian Muli was also a victim of violence. When you openly flirt with male interest infront of your husband, what would you expect? I hope feminists will answer that question.

Prezzo is rumored to be in the drug business, a speculation triggered by attendees of his wedding with former Cooperative Bank Chairman Hosea Kiplagat’s daughter, that included Kiambu Governor William Kabogo back in 2006. Being a spoilt brat, his mother gave him an apartment in Statehouse Road, plus access to their clinic bank-account, and it’s this money he uses to entertain women of loose morals and inferior upbringing. Kigeugeu hit-singer Jaguar  is perhaps the only person who tells Prezzo off, calling him a drug/marijuana addict who lives off his mother’s money.

Life has been good for Prezzo as he has constantly gotten away with sleeping with other people’s wives, but one day in this lifetime, he will sleep with the wrong person’s wife and face the consequences of his actions. Reason we advise Dennis Okari to keep calm and walk away without turning back.

In the meantime, we ask the Kenya Television Network (KTN) to relieve Betty Kyalo off her duties as she has become an embarrassment to the company brand, and a bad influence to young women out there, who had revered and respected her.