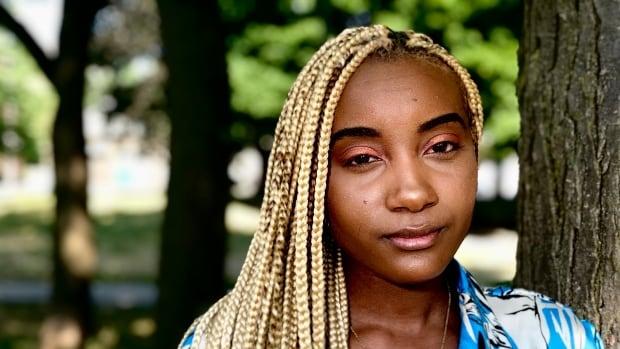 Amanda Maitland worked for WE Charity until June 2019. She says a personal speech she was supposed to deliver during an anti-racism tour was largely rewritten by a mostly white team of staff. (Tina Mackenzie/CBC)

Mr Santai Kimakeke had through a well-written article narrated the cases of mistreatment ranging from racism to gagging at WE Charity (Me to We, Free The Children).

It now appears that the Charity that has its origins in Canada has been having this as the norm. Racism and mistreatment and silencing of workers is the norm.

On a July 7th 2020 article appearing on a Canadian news channel, a former staff of WE Charity, Amanda Maitland narrates how her anti-racism speech was changed to suit the egos of the white-owners of the outfit that boasts of being diverse and open. Ironical.

Asked by CBC News about how she felt over her changed speech, Ms Maitland said, “I felt like I was sinking in sand. I felt anger.”

The Charity which runs schools in Kenya has other projects in the country in the areas of Water, Health, and food security.

CBC says, Maitland’s story — which she first shared on Instagram — has sparked widespread discussion on social media about WE. Some have begun sharing their own experiences while working at the organization, and a petition signed by 150 current and former employees is circulating, calling on WE to take specific anti-racist measures.

CBC News has spoken to 15 former WE employees, some of whom confirm Maitland’s speech was changed, and some who were at the town hall where Maitland spoke out publicly. Most described a “culture of fear” within the charity when it came to challenging or criticizing decisions.

Maitland said she was hired by WE as a motivational speaker and leadership facilitator in the fall of 2018. She was asked to deliver a speech about her personal experience with racism on an anti-racism tour in Alberta in early 2019.

“I have a lot of experiences when it comes to racial injustice. So, I was excited — I was over the moon,” said Maitland.

She began writing the speech, initially going back and forth with a WE Charity team who made minor edits, she said.

She said she delivered her speech several times on the tour, but on a brief return trip to Toronto, WE Charity staff gave her a different speech to deliver.

“I was literally … told that there had to be changes made,” said Maitland, who said it was the first she’d heard of any issues with her speech.

“I had no emails while travelling. I had no phone calls. No messages of anything within, like, an update that a speech may have to get changed.”

Maitland claims her personal experiences with racism as a Black woman were largely erased and watered down with subjects she hadn’t written about.

Though the charity has apologised to Maitland, the Kenyan case should be investigated by authorities.

This part here by Mr Santai Kimakeke is very telling

The next 24 hours was the most tormenting time in my life.

Marc opened the meeting by saying, “We are going to have a serious conversation and it is going to be a tech free talk, please turn off your phone”. I reaching into my pocket to get my phone to turn it off, and as I got it out, Marc forcefully grabbed my wrist, twisted with his left hand and took my phone and gave it to Karin. At this point I became furious, agitated and almost walked out of the boardroom, this is when he said, “you do not want to do that because there are two armed men out there who are going to deal with you in a more ruthless manner”. Marc was accompanied to the meeting by 2 police officers, they stood outside the whole time he interrogated me about the blackmail letter.

Marc Kielburger and Karin Doherty (his Chief of Staff) claimed that they received threatening ransom demand emails. I have since been shown a printout of the “email” asking for a payoff or else the author would release “really bad and damaging” information about the organization including;

Fraudulent and criminal practices by Mr. Marc and WE charity

Kidnapping and forceful transfer of assets from the former country Director – and Marc’s dictation of his divorce.
A 36 page Cyber investigation report on Jessi and Jarren (from Canadaland)

These are grave matters, which I understand, and included a security breach of Karin Doherty’s computer. During the four hour meeting which I recorded, Marc utters numerous threats against myself, my kids, my reputation, my career and my contacts and friends.

Multiple times that night he said, “I have a document here that you will sign, I will not use it now, I am going to hang it over your head for the rest of your life should you ever cross me”.

To this day, I have not seen the letter that he wanted me to sign.

The allegations of fraud, mistreatment, racism and gagging against the WE charity points to a more sinister plot.

Mr Santai was forced to recant his exposé.

Is WE Charity (Me To We/ Free the Children) engaging in money laundering?

In this article:#RacismInKenya, Free The Children, Me to we, We Charity