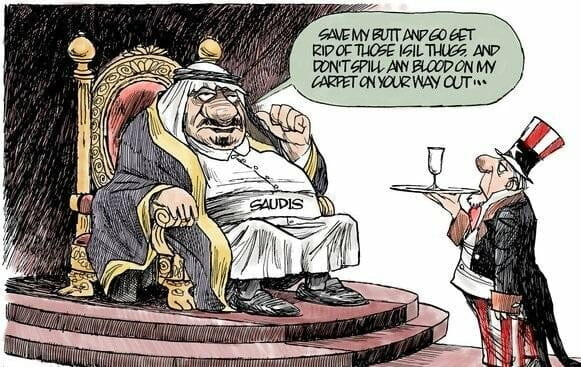 “We are not terrorists, our religion has been hijacked, Islam is a religion of peace”, said my moderate Muslim friend. “Oh, I apologise, I have been unfair to you. Here I was thinking you wanted Shariah Law imposed here ”, I replied. There was a moment’s silence. “That’s different”, he said, and that’s why I’ve lost another friend.
You see, Islam IS Shariah. You can’t have one without the other.
You can’t call yourself a Christian if you denounce the teachings of Christ and you can’t call yourself a Muslim if you denounce the hadiths of Mohammed. If you do, you are either a heathen or an apostate with a date with hell.
Western leaders have a responsibility to their constituents to wipe these terrorist groups from the planet and they can do it, yet still they remain in denial waiting to react to the next attack on the West with sickening platitudes.
Obama has now called a summit of “moderate” Arab nations to discuss this worsening “workplace violence”… WTF? That’s akin to asking a clan of vampires to discuss an overflowing bloodbath.
The Obama concept of a “moderate Arab bloc” is the stuff of fairy tales. No Arab nation has the stomach to confront the ISIS or Al Queda unless they themselves are directly threatened.
Obama may have a soft spot for Islam but he will never understand the labyrinthian mess of intertribal Islamic bastardry that rules the Middle East. The so called “coalition” against the ISIS is therefore predictably falling apart.
Obama’s “moderate bloc” is perceived as a group of Arab States that act in coordination and agreement with American policy. Bullshit, nothing could be further from the truth. Obama’s anti-American ally, Saudi Arabia, cannot even influence the Gulf States, each has its own agenda.
Meanwhile, Obama’s prime adversary, Iran, is conducting a sophisticated geopolitical tactic that is likely to succeed in getting Arab States over to its side. When it stresses the Palestinian problem and opposes American hegemony in the region, it is actually closer to the position of the Sunni Islamic States.
In fact, there is no “Shia” element in Iranian foreign policy. When Arab leaders speak about the Iranian threat they note that, “Iraq, Lebanon, Syria and Palestine were stolen by Iran from the Arabs,” and they never mention any nuclear threat.
When the corrupt terrorist twins, Qatar and Saudi Arabia, do not agree with America’s Iranian policy, Egypt refuses dialogue with both Iran and Syria, which are both supported by Saudi Arabia. Iran now has boots on the ground in northern Iraq trying to fill the vacuum left by the US but there is no coordination with the coalition’s airstrikes because the coalition is actually the enemy… work that one out!
Egypt reluctantly agreed to an American request to replace its ambassador to Baghdad, but Egypt of course is in receipt of billions in US aid.
Naturally the Saudis aren’t short of a quid so they flatly refused the American request.
With the exception of an impotent Jordan, the Arab League is a nest of vipers who will turn on the West the moment it can subdue its own Arab enemies.
Ally Turkey not only refuses the US an airbase from which to attack the ISIS, it harbours Hamas and supports ISIS by purchasing its stolen oil at half price, to the tune of $1 million per week.
But here’s the doozy of all doozies: The Saudis have now allowed the US to construct training centres on Saudi soil, and who are the Americans training? You’ll never guess. “Moderate” Syrian rebels! I wonder if Obama realises that it is the Syrian rebels who are the backbone of the ISIS.
Must be a pretty clever bloke this Obama because not even Mohammed could tell a “moderate” from a “radical” … unless of course handfuls of free US dollars were involved.
Tony Abbott may have followed Obama into this unwinnable madness but now they are both nursing bloody noses because Abbott did not pass his Arab studies test and Obama appears to be on the wrong side.
The term, “moderate Arab bloc” is yet another slogan invented in the corridors of the White House.