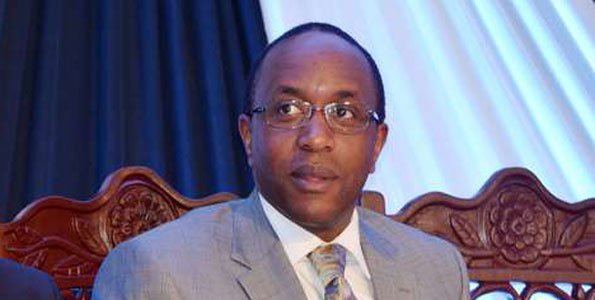 Since 2013, Kenya has been led by a daft cartel comprising of alumni from the so-called “prestigious” St. Mary’s School in Nairobi, who have exhibited nothing but mediocrity and aloofness while handling policy and strategy.

Frequent Flyer 1 has just been partying, while his helpful hands consisting of the buffoon Jomo Gecaga, Njee Muturi and his brother Muhoho Kenyatta, have just been cutting deals for themselves, thinking that Kenyans are too dumb to notice what’s going on.

His clueless deputy William Ruto can be compared to a kept woman. He’s simply occupying a seat he has no idea about, and is hoping to kill time while he waits for 2022 as he expects a miracle to happen, which will propel him to presidency.

Despite the British accents and polished upbringing, St. Mary’s alumni (euphemism for the rotten Jubilee leadership) are nothing but a bunch of silly posers, who’ve used Uhuru’s presidency to reinvent their hopeless selves.

When we discuss about the water crisis, these spoilt brats have never been in such a situation all their lives, as many have been raised in luxury and comfort, with their parents taking care of them. Many still live in properties owned by their parents, unlike the rest of us who are struggling to buy land and acquire mortgages to keep this messed-up economy afloat.

For instance, Fred Michuki who is a mainstay in Statehouse, has never paid rent all his life. He lives in property owned by his late father John Njoroge Michuki. He drives a car inherited from his late father. His children or nephews or nieces school-fee’s is paid from a trust-fund set up by his late father. He just wakes up to eat breakfast at his late father’s resort Windsor, then starts drinking alcohol. Surely Kenyans, do you expect such an individual to identify with the plight of ordinary mwananchi like you?

It is quite a catastrophe that someone who hasn’t gone through the pains of everyday hustling, is now calling the shots, together with his equally misguided and priviledged former schoolmates. This is an uninspiring lot that needs to be sent packing this August.

I probably air more sense than the entire Uhuru’s class combined, since these clowns are living in their own zone. They seem to think that their reality is a benchmark for everyone.

I will give some simple policy interventions which I thought out of my head, after careful evaluation of my surroundings.

Government needs to immediately zero-rate and abolish all taxes on water drilling equipment. This includes vehicles used to drill boreholes and related machinery meant to pump water from the source to homes or industrial parks. Taxes on water tanks should also be scrapped.

Government needs to put a cap on the amount of money charged by companies drilling boreholes. Presently, exorbitant players like Davis and Shirtliff are charging millions and exploiting Kenyans, instead of reducing their prices and encouraging more people to drill boreholes. After all, the investment cost in the drilling machine is normally recouped by the fifth drilling.

Instead of Jonathan Mueke extorting Kiza Lounge, Alfred Mutua taking his wife on dates using taxpayer money and William Kabogo kidnapping children, they can pass statutes requiring every developer to have a borehole in the flats/apartments and gated-communities they build. I’m thinking of high density areas around Nairobi which have turned into residential zones including Ruaka, Zimmerman, Kahawa Wendani, Githurai, Syokimau, Rongai, plus the entire Nairobi which is one concrete jungle.

Private players in various areas are already using their private boreholes to serve neighbours, so such initiatives should be encouraged to reduce this dependence on rain-fed water.

These are simple policy interventions which can be implemented immediately in the same speed as which election laws were changed overnight, but these St. Mary’s morons don’t care about ordinary wananchi. They’re simply living in a bubble forgetting that when the real revolution between the rich vs the poor comes, it’s their homes and properties that we will be raiding.

We have seen the contempt with which the Doctor’s Strike is being handled with, and even saw Uhuru’s pathetic attempt at shipping in doctors from India, to try and blackmail our own brothers and sisters into calling off the strike.

These brats from St. Mary’s have no regard for humanity, beyond their simple-minded cliques and shopping sprees abroad.

That simple policy intervention is something that can be conjured by anyone, which is why I doubt that St. Mary’s is a school. This must have been a facility to condition children with an inane superiority-complex by the misguided Irish priest, who was conducting a social experiment.

Otherwise how do you explain someone purporting to spend $4 Billion (or Kshs. 400 Billion) on a single track, 500km rail-line, powered by diesel, with a maximum speed of 120KPH yet Morocco have a high-speed 340KPH electric train, with two tracks running 700km for only $2 Billion (or Kshs. 200 Billion)? I mean, what does this Uhuru take us for?

We are in the information age. If St. Mary’s morons imagine that information is a privilege only enjoyed by the elites as it was during the Moi-era, then perhaps those imbeciles need a chill-pill. We knew Uhuru’s agenda from the Indian media, even when he had claimed that he’s attending business summits. Information today moves faster than the speed of light.

Other than rural-based Kikuyu’s who’ve been hypnotised by Kameme FM and religious leaders on Jubilee’s payroll, the young, urban and educated Kikuyu’s are “woke” and will definitely not re-elect Uhuru again. How can his daft policies deprive young graduates jobs, as a useless hairdresser reaps billions from the NYS scandal? Why are educated young people still living with their parents? Why are young girls walking around with their CV’s, many being forced to depend on handouts from older male benefactors in exchange for sex?

We don’t want Kenya to be like Congo, where there are no empowered and independent women. Uhuru’s policies are driving us down that route to destruction.

Is it a coincidence that the roads in Brookside/Peponi School have been tarmacked during the presidency of Uhuru? A 12 KM stretch leading to the Great Rift Valley Lodge built in the 90’s, was also tarmacked recently. Uhuru’s private residence along Denis Pritt Road has also been refurbished. It now has illuminated walls like The Sankara Hotel plus a gazetted public road has been illegally blocked, so as to enable the family to enter and exit without traffic jam. This house has had a live (kei apple) fence since independence. Is it a coincidence that all this is happening during his presidency? 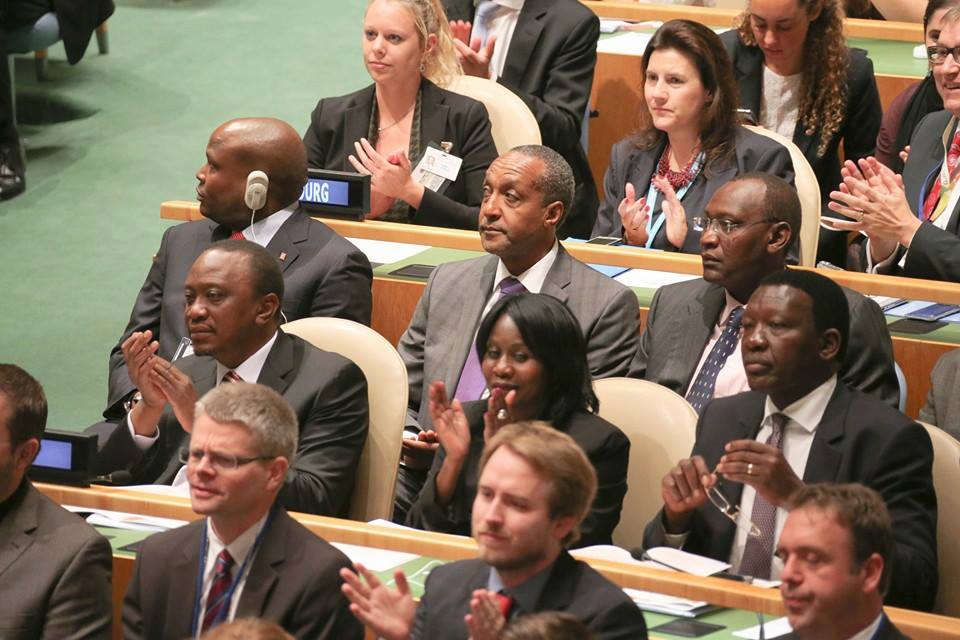 CAPTION: Why was Uhuru’s brother Muhoho attending this UN General Assembly? In what capacity? Is Kenya a monarchy?

For long we had believed propaganda that William Ruto is the one stealing money in Government. Not anymore.