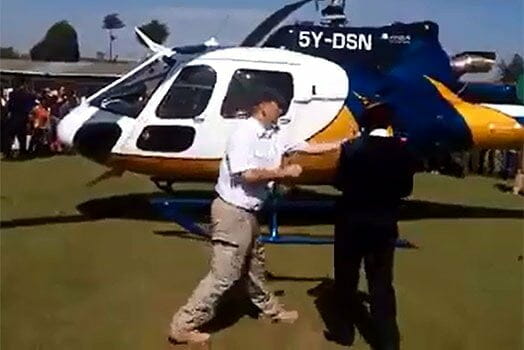 A clip showing the disgusting moment a British pilot  who happens to be William Ruto’s pilot assaulting  a female Kenyan police officer in Nyandarua Sunday is doing the rounds on social media .

Already, Kenyans on Twitter have started a hashtag #DeportRutosPilot.

It is thought that the pilot of 5Y-DSN had approached the police officer asking her to control the crowd that was surging towards the helicopter.

It appears as if she declined, and he responded by trying to grab the cane from her.

She declines again and walks away but the man follows her, and shouts: “Then you’ll have to explain to the DP.”

At one moment, the man charges at the female officer, forcing standers-by to raise their voices in a bid to scare him off.

“Hautampiga,” one man is heard saying saying in the clip.

But the determined pilot then shoves the officer, shouting: “Then do your f****** job.” He then retreats to his chopper as the clip concludes.

Pilot’s name is Allister Brown. Helicopter is owned by @WilliamSRuto, not a charter. Purchased 3 months ago. #DeportRutosPilot

Here is the Video

Dp Ruto’s Pilot caught on camera harassing a lady cop in Nyandarua. What more evidence is needed to deport? pic.twitter.com/LntsN0j6KR