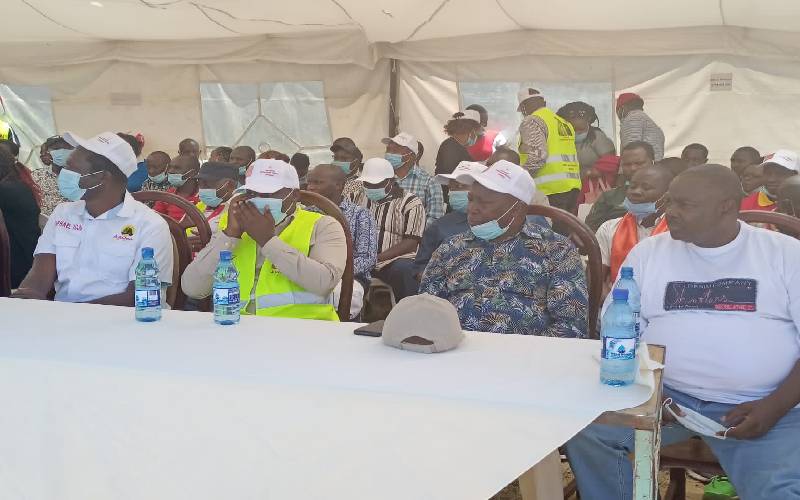 Hours after the news that the Orange Democratic Movement (ODM) party has officially withdrawn from the Hell’s Gate and London Ward by-elections in Nakuru County in favour of Jubilee party candidates, a video has now emerged on social media showing that indeed the ruling party is earnestly looking for a grand win by all means necessary.

From the clip heavily circulated by Tanga Tanga bloggers, it was Christmas come early for residents in Nakuru and especially those from London Ward where Jubilee party campaign officials landed with bags of goodies for delighted voters who could be seen scrambling to line up and receive their token.

“This is what Inspector General has reduced the police service to. Supervisors of impunity and law breaking,” an angry Kericho County Senator Aaron Cheruiyot wrote in part while sharing the video on Twitter.

This is what IG @IG_NPS has reduced the police service to.
Supervisors of impunity and law breaking.@EACCKenya will not take this up but will quickly go after MCAs who oppose BBI.
We are a proper basket case.
Just hold on to whatever you can.
The breaks have failed us downhill. pic.twitter.com/jQng3UwbcN

The Constitution of Kenya, 2010 provides that elections in Kenya shall be free and fair. The legislature has enacted laws that elaborate on offences which if committed by persons vying for elective office adversely affect the consideration of elections as free and fair.

Section 9 of the Election Offences Act considers bribery to have taken place where during an election period a person directly or indirectly offers a bribe to influence a voter to vote or refrain from voting for a particular candidate or political party.

Voter bribery also occurs where a voter is influenced to attend, participate or refrain from attending a political meeting, a march, a demonstration or other political event.

Where the court finds, beyond reasonable doubt that a person has engaged in bribery or has accepted bribe, he shall upon conviction be liable to imprisonment for a term not exceeding six years or a fine not exceeding two million shilling or both.

The court may further rule on the invalidity of a contested election affected adversely by instances of bribery contrary to the elections laws. In addition to the sentence, the law requires that the election court report such a person to the Independent Electoral and Boundaries Commission (IEBC) which may bar the person from contesting in that or future elections.

With ODM now out of the race, the contest now leaves the battle lines drawn between Jubilee and United Democratic Alliance (UDA).

The announcement was made by ODM Nakuru county chairman Peter Ole Osono as they joined Jubilee campaigns in London ward.