Ruto, who never lacks words for such situations, has over the last few days been linked to the case where Echesa allegedly defraud a foreigner Ksh. 39 billion in a sham military tender.

Through his official Twitter handle, Ruto insisted that politics is being used to incriminate him in an incident he had nothing to do with.

Adding that those behind the idea are on a witch hunt mission to tarnish his name.

“The desperation of my political competitors on their choreographed smear campaign against WsR is evident even for fools (whom we have a shortage for)to see,” read a part of the tweet.

In addition, a confident DP Ruto assured his followers that the truth over claims of his involvement will soon come to light and clearly portray his innocence.

“Just wait and see where this will end up,” pronounced the Deputy President.

In a twist, the second in command seemed to have thrown the ex-CS under the bus after he stated that the authorities should go for those directly involved.

An angry Ruto reiterated that he should be left to serve the nation instead of being roped into petty situations.

“Washindwe! Go for the fraudsters. Leave me to serve the nation,” wrote Mr. Ruto.

The desperation of my political competitors on their choreographed smear campaign against WsR is evident even for fools (whom we have a shortage for)to see. Just wait and see where this will end up. Washindwe! Go for the fraudsters. Leave me to serve the nation. pic.twitter.com/LzzrSq3jbx

On Thursday, after the arrest of Echesa by the DCI, details emerged that the ex-URP Leader was in on the gun deal scam that reads like a Hollywood script.

It was reported that Mr. Echesa had promised an American living in Poland a lucrative tender and even assured the victim that the contract offered would be signed in the presence of Ruto, as a way to lure him into the trap. 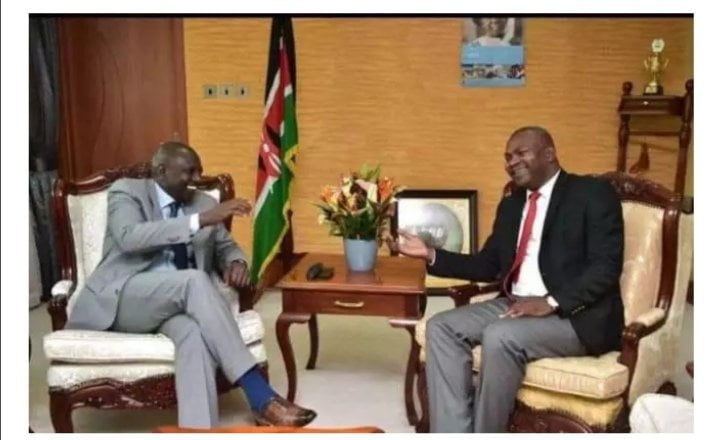 FILE photo of Ruto and Echesa: Has the boss left his errand-boy to face the sharp jaws of the law on his own?

Satisfied, the deal went through and a downpayment of Ksh 11.5 million was made as a consultancy fee.

The complainant then arranged a meeting with Echesa and his men at Harambee House annex.

The ex-Sports Ministry boss then travelled to the European country where he inspected the equipment meant to be used by the KDF.

The Poland national was then coerced into penning the deal and would receive Ksh. 52 million.

The complainant remarked that he was left puzzled that Ruto was nowhere to be seen during the signing of the contract at the government offices.

Echesa was arraigned in court on Friday and forced to remain in police custody for the entire weekend before his case is heard again on Monday.