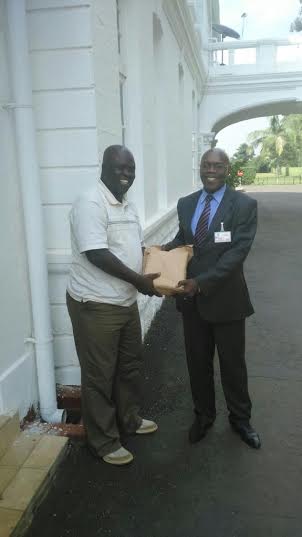 The President went against protocol and instead, handed his personal donation through one of his close confidante’s Billy Arocho, who is the twin brother of celebrated radio-show host, Fred Arocho.

It seems that the President did not prioritize meeting Gor Mahia Chairman Ambrose Rachier, probably because Rachier, despite heading one of the richest clubs which bags the most money from gate-collections, is always begging for handouts.

The President is keen not to associate with corrupt embezzlers and so today’s message to Rachier was very clear.

After his appointment, Fred Muteti was roped into corrupt practices by Sports Kenya CEO Gabriel Komora, Head of Finance Francis Githaiga and Head of the tender committee Wilberforce Chebet, together with Sports Minister Hassan Wario and Deputy President William Ruto.

The group held several meetings with a very questionable consortium as regards to a very sensitive football project, which will put Kenya on the map regarding sports and tourism. The consortium consists of a vehicle dealer and a golf manager.

Pewin Motors Limited owned by Peter Kirigua, an old man who has no idea of football at all, Icon Sports Marketing owned by Sam Mwai, another old man whose current assignment is managing Karen Golf and Country Club, and a shadowy company called OpenSide Sports UK, which is not licensed by relevant football bodies, and has no known previous work in the country or beyond, and who were paid hundreds of thousands of dollars to bring Arsenal in 2013, but instead embezzled the money with senior government officials.

Muteti has gone ahead to endorse this assembly of crooks, with the blessings of Deputy President William Ruto, who is himself embroiled in a massive corruption impasse and has been named as the High Priest of corruption in Kenya.

And while Fred Muteti imagines that President Kenyatta is like his predecessor who only dealt with old men, he will be surprised at how the President is keen on youth affairs and is engaging young people directly.

It is hoped that today’s happenings at Statehouse will send a clear message to Fred Muteti, that his board will be disbanded should he proceed with the same “business-as-usual” mentality that Sports Kenya officials have introduced him to, and that football is not just an after-thought for President Kenyatta as they would want themselves to believe.