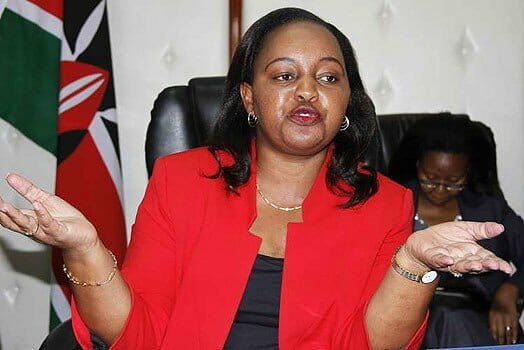 As the NYS scandal unravels, we are learning more about Waiguru deals and her initial ebullient puckishness all along. Kenyans are finally realizing that Waiguru has been a fraud all along.

Her arrogance and hubris cant help. Kabura’s father has come to the defense of his daughter and asked the hard questions nobody wants to answer. The poor and humble father wonders how his daughter would have looted all the alleged NYS monies yet she lives in a rented apartment in Kinoo. The poor man is damn sure his daughter was used as Waiguru’s  conduit in the NYS Grand heist .

Sources have revealed to Cyprian Nyakundi that Waiguru has suspended her media team. You see when the NYS scandal first appeared, a media  team was set up to promote propaganda and shift attention .

This is the team that came up with myriad propaganda tactics . The media team came up with hashtags like #NysTransformation , #WaiguruBlewWhistle e.t.c . All these were aimed at portraying private Anne as a victim under attack because of her achievements despite the fraud that was hard to cover .

My sources reveal further that the team has been disbanded because they tried to shift Waiguru’s woes to Evans Kidero a narrative many Kenyans diddnt buy . Many Kenyans instead Tweeted their disappointment and urged Waiguru to carry her own cross instead of blaming everyone that she imagines especially when playing her piano .

This is the same team that came up with the idea of sanitizing Waiguru. I hope you saw the Citizen TV stage managed interview by Hussein Mohammed who has now become a propaganda and PR tool for the Corrupt . Waiguru feels the media team misled her. Now no media wants  to host Waiguru. This is why she had to beg Ghetto Radio to give her an opportunity to defend  herself.

The team was also squandering the Propaganda cash.

We  also write this article, knowing very well that Waiguru  executed the biggest heist in Kenyan history, where she Looted Kenyan taxpayers worth billions and the attempted cover-up by institutions that are supposed to tell Kenyans what happened to their taxes.

With that in mind, we are also alive to the fact that the sudden/mysterious disappearance of witnesses in Kenya when any high profile case gains traction is never by coincidence. By the way, this has never been by coincidence. Most of these people dont die natural or self-induced deaths. People like George Saitoti, Mutula Kilonzo, Otieno Kajwang, George Thuo were murdered for obvious reasons.

Cyprian Nyakundi has  followed all contradictions that Anne Waiguru  has treated the country to, and it’s evident that she was following a script and she is the final link in the NYS Scandal. We are also aware that pressure has started building up  because all institutions are seriously pursuing the NYS case to clear themselves due to pressure from Kenyans who even want EACC Disbanded for nurturing the culture of impunity and corruption.

We believe that Josephine Kabura can be classified as a high profile  witness who should then be accorded extra security. We believe that she has the answers to the NYS grand heist as Kenyans pray that those who looted their taxes pay back and are locked up

While the crackdown on journalists and bloggers critical of Government policy has been executed under the guise of national security, the real focus of President Uhuru Kenyatta was to silence bloggers who have refused to let grand corruption in Jubilee Government pass.

We are now here, not representing any particular organization or grouping, but echoing the words of the vast majority of Kenyans, that any state high-handedness or mysterious disappearance of bloggers will be responded to in way of the biggest demonstrations ever witnessed in this country.