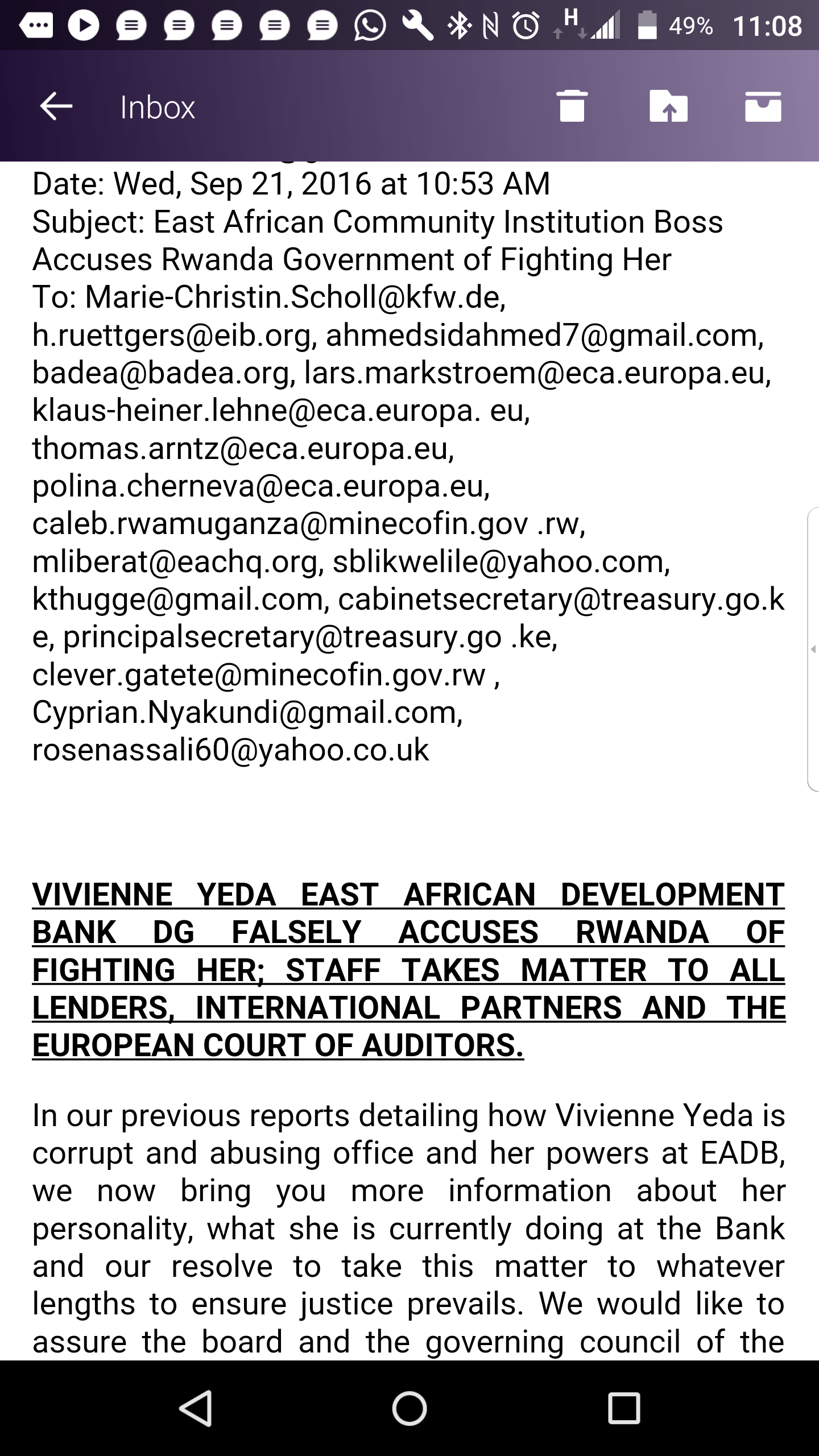 This story isn’t about to end anytime soon, and in as much as we have approached Vivienne Yeda Apopo’s lawyer to address this matter amicably, our calls to him have largely fallen on deaf ears. There must be some high-level party who has a vested interest in Vivienne Yeda Apopo’s continued stay in office, and all fingers point to Kenya, as the Director General (DG) of the East African Development Bank (EADB) is now accusing Rwanda of being behind her tribulations and sustained social-media campaign.

In our previous reports detailing how Vivienne Yeda is corrupt and abusing office and her powers at EADB, we now bring you more information about her personality, what she is currently doing at the Bank and the resolve of the bank’s staffers and whistle-blowers to take this matter to whatever lengths to ensure justice prevails. We would like to assure the board and the governing council of the Bank that despite the fact that they have ignored staff calls to request Vivienne to step down, we shall pursue the matter until she is asked to step down or step down voluntarily.

The whistle-blowers have also decided to involve the Lenders and other international partners who are friends and partners of EADB and would not be happy to see the Bank being managed as a run down household. We have also been introduced to the European Court of Auditors who have picked interest in the matter, the fact that the Bank uses lines of credits from the European Investment Bank but unfortunately they are among the institutions that have been told lies by Vivienne. She is a liar, a manipulator and keeps personal vendetta. Vivienne is so vindictive to the extent that she has failed to focus on putting right what has gone wrong but instead focusing her energy and Bank resources to hunt for staff who have exposed her. We can confirm that unless she steps down, we shall continue exposing her. It’s been about 3 months since these issues were exposed to the public (because we have no other option but also the fact that the Bank uses public money, the public has a right to know what is going on, if board members don’t manage issues at that level). You will see the attached documents which detail the mess at the Bank and how she is being protected,

Please take time to read the attached documents which include;

1. A report prepared by African Development Bank and addressed to the Director General highlighting gross abuse of office. This Letter was sent to Vvienne in May 2016.

3. A cover letter sending the staff whistle blower report to the IGG republic of Uganda copied to IGG’s in all the EAC countries calling for a forensic audit in the issues raised by staff members at the Bank. This letter was sent to the IGG Mid July 2016.

4. Another whistle blower report prepared by staff members revealing how the Director General has misappropriated funds at the Bank and why the Board members had done nothing about the situation.

All the above documents can be publicly accessed from this blog; cnyakundi.com 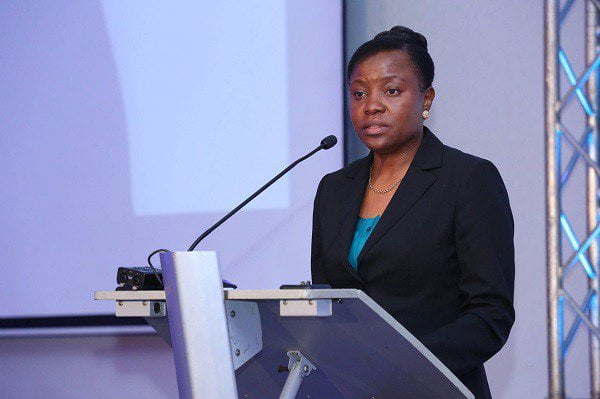 Caption : EADB Criminal operative and Director General Vivienne Yeda Apopo. Despite mountains of evidence exposing her crimes, she remains at the helm of the EA Bank, Looting and plundering everything.

Vivienne Yeda Apopo has gone a head to try and cover up whatever went wrong. She has locked up some implicating documents in her office and in the strong room where no one can access them. Some documents have been destroyed. She has even disabled staff computers stopping them from sending attached documents even to fellow staff members and printing. We wonder how she expects staff to work under such conditions. She certainly fears that staff will continue sharing evidence against her. However she forgets that we have all the documentary evidence supporting our allegations which we put together before we exposed her. We are ready to bring them out to the public should Vivienne refuse to step down. Some of this information will damage the Bank so much, but if this is what it takes to get proper leadership at this Bank, so let it be.Vivienne Yeda Apopo lives a double life, where she portrays herself as an angel to the outsiders including the board members and a real devil, manipulator to staff members. Board members need to ask themselves why she always stopped staff members from interacting with them even during board meetings. This was in fear of being exposed. Vivienne has in the past gone as far as colluding with one of the staff members who they have always looted the Bank with (George Ayella) to forge a signature of one of the staff members who resigned recently (Lad Ategeka) to effect fictitious payments. This issue was even reported to the board members by the internal auditors but as usual, the board members ignored it.

This time round staff members have come out to tell board members and the world that there is a problem at this Bank and the problem is Vivienne Yeda. Surprisingly this call is being ignored. The Board has not come out in the open to tell the staff and taxpayers what and how they are solving this issue. However we shall not give up, we shall continue with our objective of getting a credible and trustworthy leader of high integrity deserving of such an institution.

There is a regular audit currently going on at the Bank by PWC. To our surprise, she has forced Ayella to go on leave, because he knows a lot about the dubious deals which they were involved in together especially during the renovations, since its Ayella who always supported her to falsify documents and make dubious payments. Another staff called Warren John who was used by Vivienne to single handedly prepare the bank strategy has also been asked to take leave. He has been used to also do dirty work for Vivienne. She does not want the auditors to talk to them. She has further asked one of the retired staff (currently working under short term contracts) who was her former secretary when she was Director of legal at the Bank and her confidant to sit in all audit meetings between PWC and the various staff members. The reason is to intimidate staff members not to fully open up to PWC.

Under normal circumstances if allegations have been made against a high profile figure at the rank of DG, (our lenders and international partners can share best practice with us), and if Vivienne was a credible person she should have stepped down already since the information revealed was overwhelming. Or she should have called for an independent audit to clear herself. But what she did was to turn this whole fight into politics (as explained in the attached documents) to an extent of accusing Rwanda of fighting her and wanting to take her job. She mentioned in front of Board members that Rwanda was fighting her together with a former Finance Manager (who resigned recently) so that she goes away and Rwanda takes over her job. First of all the former Finance manager is not Rwandese as Vivienne lied in front of board members when she surely knew that the former finance manager is a pure Ugandan. This should prove to you that you have been dealing with liar.

Please note that no one is looking to take Vivienne’s job, not even Rwanda and not any body from African Development Bank. Rwanda took up the matter seriously because of their high moral ethics and zero tolerance to corruption, followed by Tanzania. What we all want is an honest and credible leader to take on the top management of the Bank, to build structures in the Bank, to grow the Bank, to allow board members to genuinely support the Bank by reporting to them the truth.

Everyone including Rwanda would be happy even if the next DG was still a Kenyan as long as they are people of high integrity and can lead people. It is not in Vivienne’s heart and blood to be an honest person, she is not a person who can manage a team and therefore whoever thinks Vivienne will change is wasting their time. Some of the board members have served at the Board of PTA bank. PTA Bank almost collapsed because of bad leadership. EADB at some point had a bigger balance sheet than that of PTA, however the day the board of PTA decided to fire that particular President (he was Ugandan), the Bank stabilized and started to grow. Today PTA is a very large and well managed Bank. This is exactly what EADB needs. The Bank should be allowed to operate without any politics and political interference as it is today.

It’s not too late. The Lenders and our International partners need not to go away. We have identified the problem before it’s too late, let us have it solved and there is only one way to get it solved. Get Vivienne out of the Bank. It is even cheaper to pay her the remaining period of her contract and leave than letting her to stay. EADB has a lot of potential which should be realized. This can not happen under Vivienne’s leadership. Imagine, she is still fighting her managers, isolating them, going behind their backs to deal with their juniors simply because she suspects some of the managers are revealing information to board members. She has confided in some people that some of the managers who met with the board members on the 15th July 2016 will be fired as soon as she emerges from this fight. Unfortunately this will not end unless she is out of the Bank. One person cannot be corrupt, mistreat and hurt people for a long time and still get away with it all the time.

Hereby attached are documents for everyone’s perusal, detailing graft at this lender, which will collapse if intervention isn’t forthcoming.