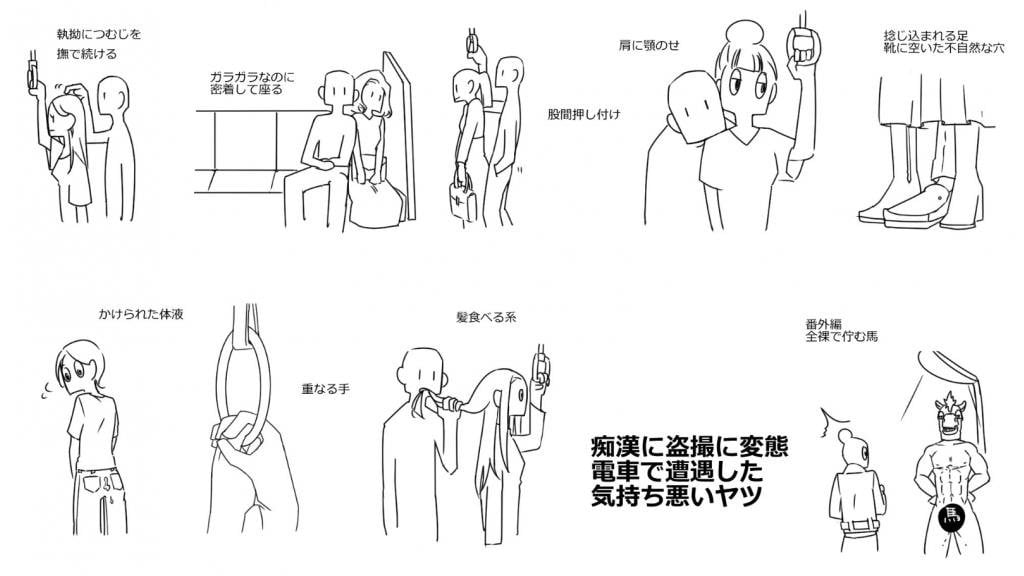 Japan’s ‘chikan’: An illustrative take on how men grope women on trains.

Groppers in Japan are very incessant.

Gropping, in a sexual context, groping or fondling is touching another person in an unwelcome sexual way. The term generally has a negative connotation in many societies, and the activity may be considered sexual assault or otherwise unacceptable.

There’s a word for this kind of behaviour where women are harassed by men inside Japanese trains.

What is Chikan?
Any act of public molestation or offense, usually of a sexual nature, against unsuspecting victims. (Japan) A person, usually a man, who rubs against or gropes others, usually women, in crowds, often in trains, to attain sexual pleasure.

Police and authorities are having a hard time dealing with this crime.

Japan has a huge problem with sexual harassment on public transport. A recent viral video show a train passenger tackling a gropper; but women are often afraid to do anything about it.

Tokyo police fight the perverts through an app called ‘DigiPolice’ where victims of gropping can activate a voice that loudly shots ‘STOP IT’ or display a screen to discreetly show other passengers that reads, ‘there’s a molester, PLEASE HELP!’.

This social issue is very big and lots of people, mostly women have downloaded the app.

See the video below: