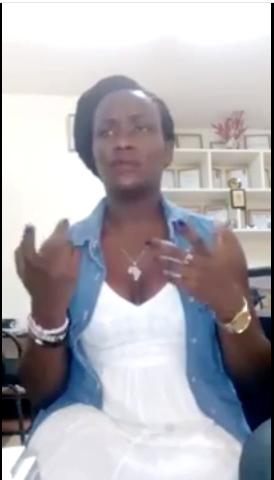 A female analyst Wangari Ngure has called out Kikuyu men for their outlandish or borderline pedestrian manner of asking for goodies. The lady describes the uncouth means of sexual overtures as shady, pleading with them to style up.
You cannot blame Kikuyu men for acting all shady, if they listen to shady characters like Kameme FM’s Njogu wa Njoroge or follow Mugo wa Wairimu on Facebook. Wangari Ngure should instead shift her messaging, to pleading with women to change their ways and stop listening to characters like Njogu wa Njoroge.

Indeed Kikuyu women have been said to nowadays prefer dating men from other tribes, with Luo’s being the biggest beneficiaries of the Kikuyu women exodus, due to their generosity and use of romantic words to utter what could be dismissed as “sweet-nothings.”

From the video, Wangari Ngure looks sophisticated, from the watch she wears, to her dress and her hairdo. Her accent doesn’t also sound forced as she switches from English to Kikuyu in effortless charm. She also doesn’t sound materialistic, like those women who base their sexual exploits purely on monetary motives.

Wangari Ngure’s simple wish is that Kikuyu men employ some class when approaching women. Which is a contradiction because many Kikuyu men who claim to be legit like @GicheruGicheru, often whine about being curved by money-hungry bitches and feminists who demand a mind-fucking and wallet-draining.

For Wangari Ngure not to attach any monetary requirement in her video as a mandatory, can only mean she was raised well, unlike the basic bitches who have made Nairobi their home, whose work is to solicit MPESA from men, using a template dispatched to multiple users.

Perhaps it’s time for fictional writer Wanja Kavengi to also circulate a video of herself and let’s us see if she looks as classy as Wangari Ngure? Because Kenyans are now getting tired of the same relationship “expert” by now. We need to elevate a new breed of women, who will flip the script from extorting money from men, into other issues not visible to the naked eye.