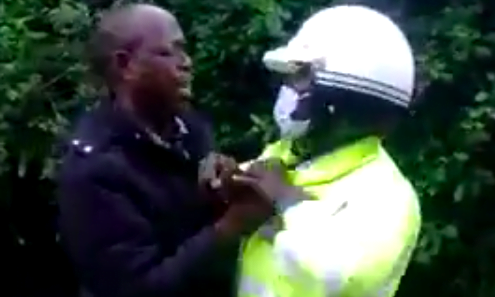 When a police officer manning the traffic-packed Magadi Road on Friday attempted to stop a speeding Subaru saloon car which was being driven recklessly along the highway, he had no idea it would turn into a full-blown dramatic road pursuit which led them all the way to the Karen.

As if the rogue driver’s guts to ignore all orders to stop and even attempting to push the traffic officer off the road multiple time was not shocking enough, when the pursuit finally ended at the Karen Country Club, more drama ensued as the man behind the wheel turned out to be a senior police officer himself, attached to the Directorate of Criminal Investigations (DCI) department.

The drunk and disorderly sleuth is said to have stopped his vehicle, furiously alighted and started fighting the traffic police officer who had relentlessly trailed him all the way from Ongata Rongai.

It took the quick intervention of security guards manning the country club’s entrance to stop the scuffle which was almost slowly escalating into a full brawl between the traffic officer and the top cop now identified as Nicholas Kiptoo and who has since been apprehended.

Below is a full police report of the incident, as well as the shocking video which shows how impunity prevails in Uhuru Kenyatta’s catastrophic regime.

SUBJECT; INCIDENT/ARREST OF A POLICE OFFICER.

Today at about 07.00hrs No. 85859 PC (R) MOSES KISIRA was on traffic check duties along Magadi Road when he noticed a motor vehicle reg no. KBM 149 F Subaru saloon which was being driven in a zigzag manner from Ongata Rongai towards Kiserian general direction. He then waved down the driver to stop but the driver defied and continued driving. The police rider then followed the vehicle and attempted to block it but again the Subaru driver pushed him out of the road, hitting the police motorcycle reg no.GkB 824A.

The pursuit continued up to Karen county club where the driver parked his vehicle off the road, alighted and immediately accosted the police rider and assaulted him as captured in a video that has since gone viral.

Karen police station was alerted by members of the public who witnessed the scuffle and the duty officer IP Karanja rushed to the rider’s rescue.

The Subaru driver was later identified as No. 80901 Pc. Nicholas Kiptoo who is attached to DCI Karen. He was later subjected to a breathalyzer test and found to be drunk at 0.49mg/l .

The officer has been placed in custody and is being processed to appear in court on Monday 3/5/2021 for the offences of:

1. Driving under influence of alcohol c/se 44(1)of the traffic act

2. Assaulting a police officer c/sec 103 of the NPSA