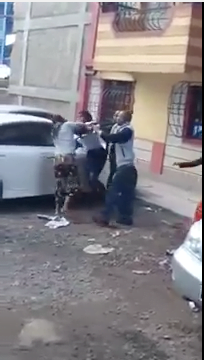 A video doing rounds on social-media shows a residential neighbourhood with pathetic looking roads, confirming our earlier article that Directors and Engineers at the Kenya Urban Roads Authority (KURA) conspire with owners of land, and developers of property, to concentrate infrastructure projects in affluent areas of Kenya.

Middle-classers in the country will be surprised to know that development agencies like Hass Consult, Knight Frank, bribe directors and engineers at KURA, to ensure that all road projects are allocated to posh areas in Nairobi, while Eastlands residential areas remain dilapidated.

For instance, Lavington is just a few metres from Kawangware and Dagoretti Corner, yet the roads in Lavington are impeccable compare to the two other areas.

The truth is that KURA directors and engineers are on the payroll of land owners and property developers, who would like to manipulate the value of real-estate, meaning they have put the entire KURA machinery on their payroll, to concentrate Taxpayers money in rich and affluent neighbourhoods.

This means that your money is being utilised to ensure comfort to those who live in the upper-class areas, but beyond that, it has seen Kenyans scramble to live in select areas, while paying exorbitant rents like Kileleshwa, because of good roads.

For instance a small stretch of road, (probably 30 meters) was constructed opposite Uhuru Kenyatta’s residence just off Dennis Pritt Road and adjacent to Statehouse, was built for over 2 years, with the contractor inflating costs so as to embezzle more money.

The cost of that small stretch of road would cost the same as tarmacking the entire Donholm or Roysambu area.

The Glorified auditor who cracked down on the theft at Afya House, while revealing the involvement of the Kenyatta Family, needs to crack the whip on the corrupt directors and engineers at the Kenya Urban Roads Agency (KURA), who have begun a Twitter campaign showing various road projects, meant to divert attention from their graft.

The worst part is that mediocre mainstream media journalists are bribed by the same developers to hype fictitious reports, meant to manipulate the price of real-estate, and influence KURA to allocate infrastructural projects in high-end neighbourhoods, yet the same mediocre Daystar journalists live in deplorable neighbourhoods like the one in the video.

When you watch this neighborhood brawl, one can’t help but lament the poor state of the roads, despite the fact that the tenants are driving “big” cars like Harriers. Kenyans have been dumbed-down by mainstream media, and contracted the Stockholm Syndrome, where you sympathise with your oppressors.

Kenyans have also come to worship and glorify the corporate and political classes, following the cue of Daystar journalists, who were conditioned to be subservient to the oppressors by the mediocre religious institution. Our first step to emancipate ourselves from mental slavery will be to reduce our dependence on mainstream media news.

We request Kenyans to stop watching news or buying newspapers. Leave those to rural people who cannot afford a functional Internet connection.

Because how can you be watching news from journalists, who peddle false statistics from real estate agencies like Hass Consult, all in a bid to manipulate the price of rent and property? How can you follow journalists who are not calling for the arrest of KURA Directors and Engineers, thieves of the highest calibre?

If you want peace of mind, if you don’t want to be vexed by cheap talks from Jubilee assholes like Mike Sonko and Moses Kuria, then stop watching news or buying newspapers. Stop also listening to radio stations and instead buy mix-tapes.

Watch this video and see the deplorable roads with mud. Because all the money is diverted to make good roads in Lavington, Kileleshwa, Karen, Muthaiga, Gigiri, etc. Your tax money is being used to enhance the comfort of the rich.

Middle class Kenyan wankers will forever get the short end of the stick, because of your addiction to mediocre Daystar journalist. Wake up and smell the coffee dear useless Kenyan!