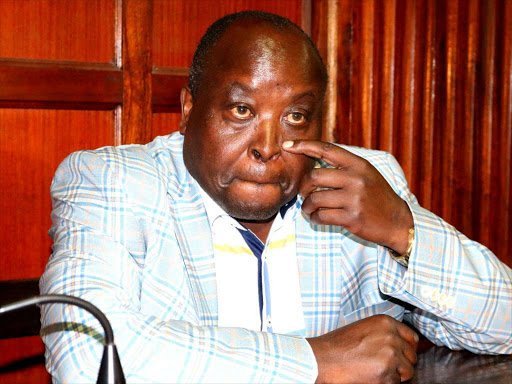 A lady identified as Amanda Jeburet Chesiyna went on Facebook to report the misconduct of the controversial Member of National Assembly for Nakuru Town West Constituency Samuel Arama.

Amanda accused the MP of gaining up with his goons to defraud her of her later father’s property.

“Today as I was going to pick my dads tipper … This stupid MP NAKURU WEST Samuel Arama decided to assault me claiming that the car is for dads last wife ..na mpaka log book Niko nayo. I wonder why MPs think they can get into people’s lives harass them just because they can … I was beaten by Samuel Arama and sexually harassed by his goons … Mimi nimechoka … Since daddy passed everyone is grabbing things left right and centre… SUSAN KIMOSOP and company Mungu anawaona”, she posted.

The accompanying videos attached shows the MP arguing with the lady.

In 2015, the 58-year-old, lawmaker fresh into office, was accused of assaulting a voter in his constituency and knocking off his two teeth, for the man’s “big headedness”. He did this inside Kaptembwo police station.

In July last 2017, the rough legislator lost a court battle to Family Bank over a Sh3 million loan. The court ordered the bank to auction his 0.15-hectare piece of land in order to recover the loan. The land was registered under the name of his wife Florence Masita and had been used as collateral to secure the loan.

In 2016 before the General Elections, Arama stunned many by ditching ODM for Jubilee. He later won the seat in a largely ODM zone of Nakuru.

He has also loud mouthed in that in the split between Jubilee senior leaders, he has sided with DP Ruto, another renowned looter and land grabber.