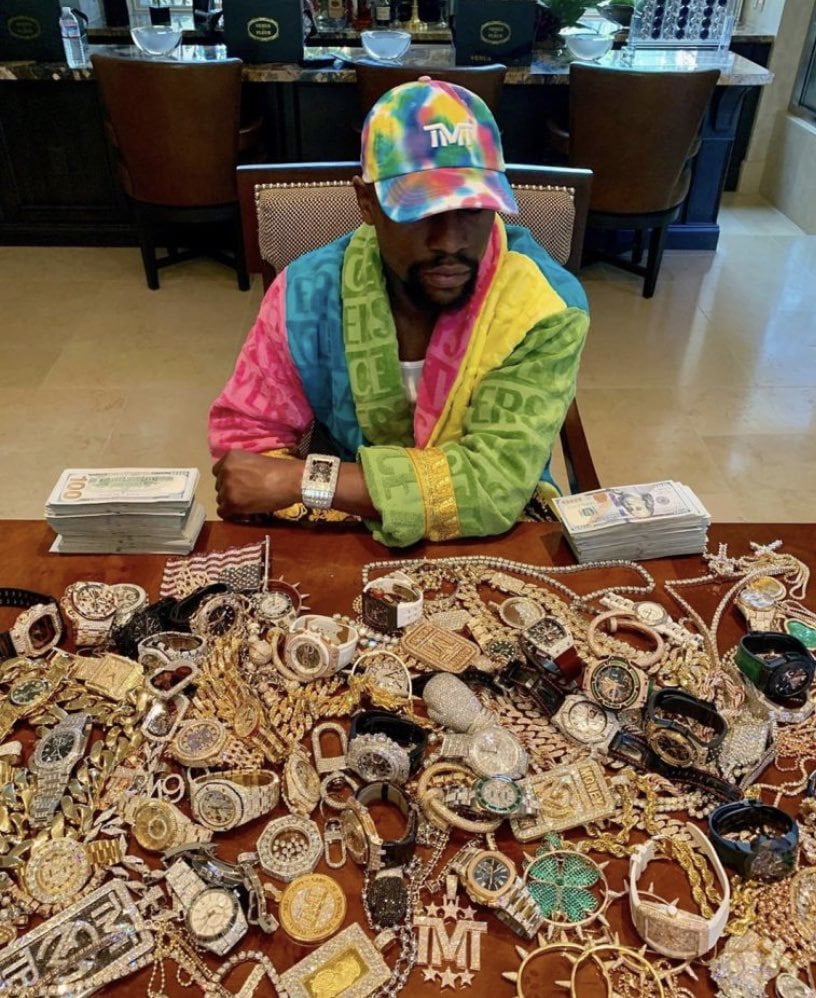 Floyd Mayweather Jr., is a professional boxer that doesn’t shy away from flaunting his riches.

A day before he started a beef with rapper 50 Cent, they’ve been many such beefs, but the latest one involved Floyd calling out 50 Cent’s unsuccessful business ventures, a video was posted online of Floyd showing off expensive pieces of Jewelry.

“JAY-Z been killing the champagne game with Ace of Spade selling worldwide at premium prices for well over a decade, while Curtis got a bottle with a cheap chess piece on it that taste like shampoo,” he wrote. “Diddy got Ciroc and its still selling worldwide and you can’t find Effen in no stores and it’s well known the shit taste like rubbing alcohol”, Floyd fired the shot

50 Cent responded, “Tell Floyd I said he won he is the greatest of all time. and nobody I mean nobody can ever take that away from him what he’s done with his life is amazing. I’m done with all of the back and forth. Now Can Someone Please Read This To Champ. POSTIVE VIBES”.

A brief History of Floyd Mayweather

Floyd Mayweather Jr. is a former professional boxer from America, considered to be one of the best boxers of all time.

However, he also has a bit of a bad reputation for being cocky, arrogant, and a dirty fighter. Yet, nobody can take away from his incredibly successful, and well-earned career. He trained incredibly hard, and the behind the scenes videos of his workouts showed exactly that.

Mayweather competed professionally from 1996-2015, and ended his career as a fighter with almost fifty wins and zero defeats.

Floyd Mayweather’s net worth, as of 2019, is an estimated $565 million, making him the richest boxer in the world.

Before competing in the big leagues, he fought as an amateur. Floyd’s amateur record was 86-8. This record ended in 1996 when he stepped up to fight professionally, entering the super featherweight division in October.

He also fought in the lightweight, light welterweight, welterweight and light middleweight divisions.

In this article:50 Cent, Floyd Mayweather